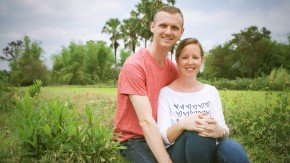 Both of us had the privilege of growing up in the mission field. Our parents showed us the needs of the world.

Stephanie was born into a missionary family that served in Africa and then on the island of Papua, Indonesia. She grew up hearing her dad’s bush plane flying in and out of the grass airstrip right outside her bedroom window. She has many fond memories of helping her parents with medical emergencies and dentistry, translating, flying with her dad, and of course making beautiful lifelong friendships with local people. To this day, she enjoys Indonesian food more than American food. At age 14 she preached her first evangelistic series and felt God calling her to work for Him overseas for the rest of her life.

Joshua has a head start in ministering to the Great River people because he already speaks their language. He was seven years old in 1995 when his family went out as AFM missionaries. After graduating from college he accepted a one-year student-missionary call with AFM to the Great River Project that turned into almost four years. He had the joy of praying with secret Muslim-background believers and telling the creation story for the first time to his friends by lamplight on hot evenings. He saw that there was a great work to do there, and God needed someone willing to go.

We met through mutual friends who planned a game night to introduce us. We soon realized we had much in common—most importantly our desire to serve as missionaries overseas. Stephanie was graduating from college, and she was ready to go overseas with or without a husband. Happily, we decided that it would be with!

We prayed for quite a while, asking God to give us clear direction for where He wanted us to serve. He was very clear that was Cambodia. God has been so good to us—we can’t even begin to describe it all. That is why we are excited to have a part in the great plans He has in store for the Great River people.

Please pray for us, as Westerners used to so many healthy food choices that are readily available in our home country, that as we contextualize faith in the Son of God for salvation among the Great River People, we will faithfully teach God’s loving and perfect will and His principles for living God-fearing lives.

Our fall newsletter-we are launching!

From the first beginnings all the way to our final objective, success actually feels possible! Thank you so much to all our teachers and supporters who have helped us come this far.

We would like to dedicate the years of our future service in our new home to all the churches, families, and loved ones whose sacrifice and giving bind them to the Great River People every day. We will miss you all.

After seeing the CEB machine at work on the AFM Susu Project in Guinea, West Africa, the Guinean government bought 10 machines.