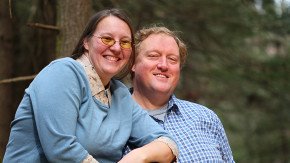 We were both raised on mission stories, and as we entered our college years we felt God’s call to full-time mission service. We each spent time as student missionaries in PNG with AFM to confirm our call to lifelong mission service before starting life together as missionaries. Prior to joining AFM, we served as short-term missionaries in Zimbabwe, Nepal, Bangladesh and six years in India. We have been working among the Ama and May River peoples of PNG since October 2017.

Orion enjoys tinkering and fixing things, which comes in quite handy here in the bush. Keren has a love for all types of handicrafts. She is working on mastering the art of making bilums, the traditional string bag of PNG.

While many tribal groups live along the many rivers of the area, other smaller tribal groups live deeper into the jungle. Our dream is to see strong churches raised up throughout our region of PNG. In animistic cultures, it is often difficult for converts to fully separate themselves from the deep-seated customs of spirit manipulation and appeasement that filled their daily lives before they came to know Jesus as their Savior. Pray that we will hear and follow the guidance of the Holy Spirit as we seek ways to disciple the Ama and May River peoples into new lives completely free from fear of the spirits.

Canoeing is part of the culture of the river people—they take pride in knowing how to do it and do it well. Even the shape, size and ornamentation of their paddles all have meaning beyond their basic function. When I purposely try to assimilate, it gives them joy that I want to be like them, which is part of the glue that binds me to the river people.

Let Us Bow to the King

The main point of his scolding was that the culture did not allow for class distinction and that I should have mitigated the situation by not allowing the grandma to greet me as was customary to greet royalty when Tai-Kadai was a monarchy.

Thank you to each of you who have been Cheerful Church Member this furlough, taking notes for your prayer list, asking questions, and giving us small gifts, a check or a pledge to support the Ama project. It is energizing to know that you are here and that you care deeply for us and the people we serve.

The closer I can connect to my local cultures, the easier it is for me to share the gospel.

I prayed for grace to accept God’s plans and to be thankful for the helpers He has placed in my life.