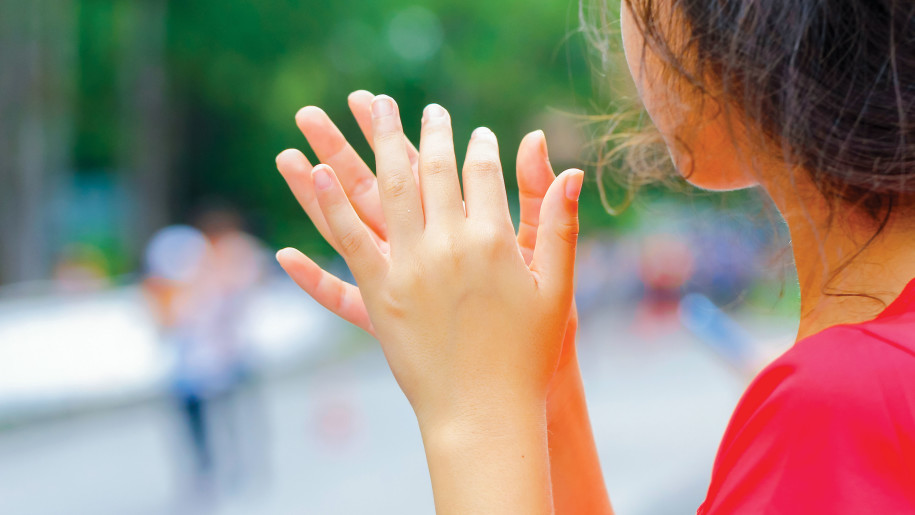 “Teacher, all done!” The student brought her workbook to the front to hand it in—much too soon.

There were still ten minutes left in my third-grade English as a Second Language (ESL) class, and Sreynary, who already spoke a good amount of English, finished early. The rest of the class were still busy working. What was I supposed to have Sreynary do for another ten minutes? I thought for a few moments and came up with an idea.

“Do you know how to play this game?” I held out my hands and made some clapping motions. Sreynary shook her head. I tried to explain and demonstrate using as simple language as possible. I was unsuccessful, so I decided to let her choose how she spent her time for the remainder of the class.

The next day, Sreynary finished early again. After she dropped off her workbook, she looked up at me, made some clapping motions, and said, “Teacher?” I made another attempt to teach her the clapping game. This time, it clicked! We spent the next few minutes playing together while the other students finished their work.

After another English class, I was surprised to see Sreynary teaching a second student how to play the clapping game I had taught her. Over the next several days, the two girls had taught the whole ESL class how to play. Many of them enjoyed clapping with one another after finishing their work each class.

The clapping did not stop there. A couple of weeks later, as I walked into the school gym, I spotted many pairs of students from all different grades clapping away and having a good time. I was amazed at how quickly the game had spread. Even more amazing was how the students took it upon themselves to teach each other how to join in on the fun. Within weeks, the clapping had spread from one student in one class to the entire school.

In the book of Acts, we see a similar story. A small group of believers learned the gospel truth and got so excited that they needed to share the news with others. One person shared with another, then another, and then another—and within a very short time, thousands of people had heard the good news about their Savior, Jesus Christ.

The clapping game participants and the early church believers started movements by sharing with others. You, too, can go and help start a new movement among an unreached people group. You will teach a few people how to follow Jesus, and in turn, they will go and share the good news with their friends, family and neighbors. Through the work of the Holy Spirit, the news of the gospel will quickly spread throughout their entire people group, and multitudes will come to believe and trust in their Savior, Jesus Christ.

Ready to help tell the unreached how they can clap their hands and sing praises to God (Psalm 47)? Please email us at service@afmonline.org to learn how you can use your time and talents to share the good news with those who have not yet heard.