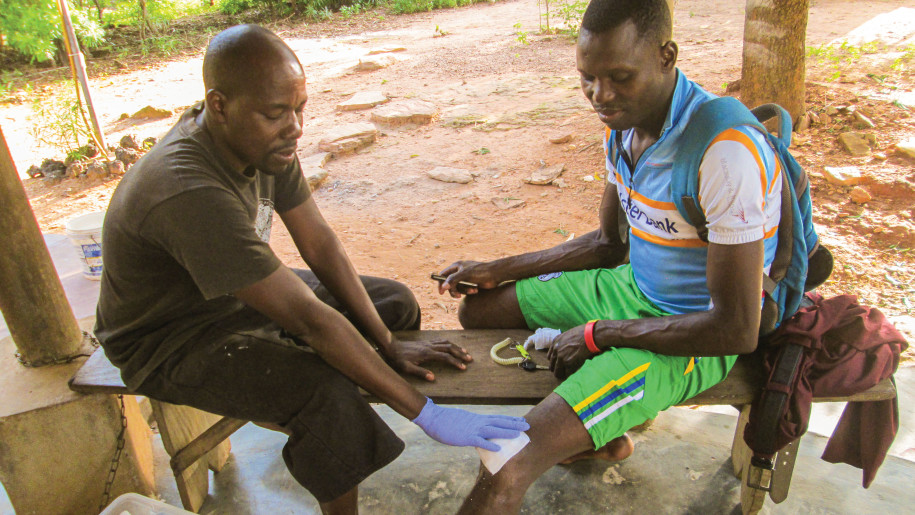 Toussaint and Tchintikou have known each other since childhood. Some weeks ago, Toussaint called Tchintikou just to say hi and to hear how he was doing. Tchintikou told him that he was actually sitting in front of the fire, shivering from fever. He was suffering from an abscess on his knee that had become infected. Toussaint, who is in charge of our band-aid clinic, regularly treats abscesses with charcoal, usually with great success. He asked Tchintikou if someone could bring him over to the clinic so he could take a look at the wound.

Tchintikou arrived early the next morning, and Toussaint examined his knee. Pus was oozing from an inch-deep hole right above the kneecap, and it was obvious that besides properly cleaning and treating the wound, Tchintikou needed to take antibiotics. Toussaint took him to the little clinic down the road where a nurse cleaned the wound and a doctor prescribed some medicine. Less than two weeks later, the wound was healing well, and Toussaint was able to take over changing the dressing for Tchintikou every other day.

How did this abscess get so badly infected? Tchintikou is a traditional singer, and they are said to have certain spiritual powers. They are also usually quite popular, and that is why they always have enemies. When Tchintikou’s abscess developed, someone in his family quickly had an explanation: some enemy had placed a bad luck charm in his way. If he had stepped on it, his foot would have been affected. But since he drove over it with his motorcycle, the charm jumped up, hit his knee and created the abscess. With this explanation, they went to see a traditional healer who poked and jabbed the abscess and plastered it with some indefinable paste. As a result, a bad infection developed that got worse by the day. Believing he had been cursed, Tchintikou himself did not have any hope, plus he did not have any money to go to the hospital. If God had not given Toussaint the idea to call Tchintikou that day, the infection would have taken over his whole body and might eventually have killed him. Someone even told Toussaint that he was wasting his time and money on Tchintikou. They believed that, being cursed, Tchintikou was going to die, or at least his leg would need to be amputated, and nothing could change that.

Several months ago, we had a similar case with a young policeman, also living in Toussaint’s old neighborhood. He had an abscess on his foot. At that point, Marcus was still with us. Marcus was our student missionary (SM) and a registered nurse. He went with Toussaint to treat the wound. After the first treatment, the policeman said that he had not slept that well in a long time. He also had a dream, and in this dream, someone was lifting a heavy load from his shoulder. He said he was sure that it was God who had taken this load off of him. When his father heard that interpretation, he was not happy at all. He told Toussaint that he would try some other traditional healer first, and if that didn’t work, Toussaint and Marcus could come back. But Toussaint made it clear that if they were sent away now, they would not come back later. They had to make their choice. Unfortunately, the young man submitted to his father, and Toussaint and Marcus left.

Tchintikou is back on his feet. He is faithfully coming to get his dressing changed and the wound is almost completely closed. As for the policeman, the last we heard is that his toes had started to necrotize. He ended up going to the little clinic, where he was told that his situation was beyond their capabilities, and was then sent to a bigger hospital. His toes will probably have to be amputated.

It makes us sad to see how Satan has his grip on people and prevents them from seeking medical help. How often do people die, when a simple and timely medical intervention could easily have solved the problem? Curses are real, there is no doubt, and sometimes it is hard to know if we are dealing with a “normal” medical condition, a curse or a mixture of both. But God’s power is beyond any curse or sickness. Our part is to pray, trust in Him and use the natural remedies and medical help that He provides. We thank God that He intervened in Tchintikou’s life and pray that this will have a lasting impact.

Cross-cultural missionaries learn and experience first-hand how to build relationships through hospitality and generosity.

More than two hundred missionaries had already left Herrnhut for the mission field. Who knows how many of those he was directly supporting. It was a staggering accomplishment.