After many weeks of preparation, Christmas break had finally come and with it the big Pathfinder campout. Our former short-term missionary Bruna Queiroz and our local coworker Jean Akolim had organized the event, and for weeks Bruna had traveled to different churches in the district every Sabbath to encourage young people to sign up for it. Jean and Bruna had chosen the village of Kouaba as the location for a couple of reasons. One, the Pathfinder group there was developing, and several members had prepared for their investiture. Two, the work of God receives a lot of resistance in this village, and we wanted to make a positive impact.

Thursday after Christmas the campout was to start, and 72 young people from nine different churches and groups arrived from early in the morning until noon. The group from Natitingou walked the whole 25 km, or maybe more, since they got lost several times. Other groups came on motorcycles or with Suzy Baldwin on her truck. The son of our district pastor had even come with a friend the entire 230 km from Parakou. Upon their arrival they all first had to set up their shelters. Although it is dry season and there would be no rain, temperatures drop quite a bit at night during that time of the year, and it is very dusty. The group from Kouaba had already worked on their shelters for days, so theirs were the most elaborate.

After lunch, they all went out into the village to visit and invite people for the evening when there was to be a special program around a big bonfire.

The main topic for the whole campout was “Vivre pour servir—Living to serve.” Friday morning the young people headed out to put that into practice. They split into two groups. One group went to the local police station and the other to the little village clinic to clean the place and hand out literature. For the afternoon, Bruna had organized several outdoor activities like walking on a slackline, using a bow and arrow, crawling in the mud (I’m glad I wasn’t part of that!) and others. In the evening they gathered around the fire again to start the Sabbath.

Toussaint and I were not part of the whole campout, but we went for the Sabbath program. I had not been to Kouaba for several months and was very pleased how the church members with their very limited means had embellished their humble little chapel. The church service included the investiture of seven ladies, six from the Kouaba Pathfinder club and Suzy Baldwin from Tanguieta.

In the afternoon there was a health program on hygiene and charcoal, for which people from the village had been invited and 23 guests had come. The program was well received, and people asked a lot of questions.

That night the older Pathfinders took part in an activity that was fun and adventurous, but at the same time serious. They were to portray persecuted Christians who had to hide from their oppressors. Bruna had assigned a few young men to be the bad guys who had to try to catch as many Christians as possible. When the game was over and they were all sitting around the fire to share, one of these “bad guys” said that every time he had seen a “victim” and had run after the person he would trip and fall, so he hadn’t been able to catch anybody. But amazingly he never hurt himself. Another girl testified that she had been really afraid in the dark, but that after praying she had felt safe. It definitely got everybody thinking about how conditions might be one day in the future.

Sunday morning they took down their shelters and cleaned the area. At the final meeting they all agreed to have another campout during Christmas vacation 2020. All the local Pathfinder leaders went home very motivated. Even those coming from churches where there is no Pathfinder club yet or where it had ceased to exist were eager to start a new group in their community. Bruna keeps in touch with all the leaders, answering their questions and motivating them to keep going.

Our team had spent a lot of time in prayer before the event since Kouaba is a place with a strong spiritual presence, and several times the spiritual leaders had threatened Jean and the little church group. We praise God that everything went well, nobody was hurt and the community activities of our young people were well received.

The Pathfinder work in our area has had a real boost since Bruna came here. She came as an STM in 2017, spent two years on the project and then decided to stay in Benin, where she continues to invest herself in Pathfinders and children, making a real difference in young people’s lives. 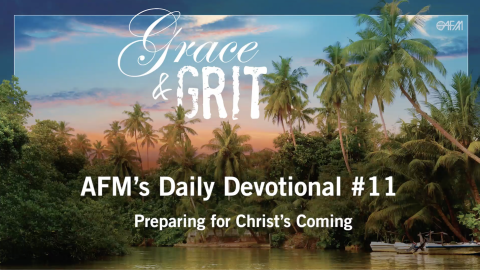 The Power of Listening

One question stands perpetually before all of us: what have we done to share our blessings with those in need? How have we used our talents for the good of others?

This earth is under a curse. Recent symptoms of this curse have given all of us cause for fear and sadness. However, I suspect they have also brought many of you something else.

Lifting You Up In Prayer

In this time of crisis, may we pray for you?