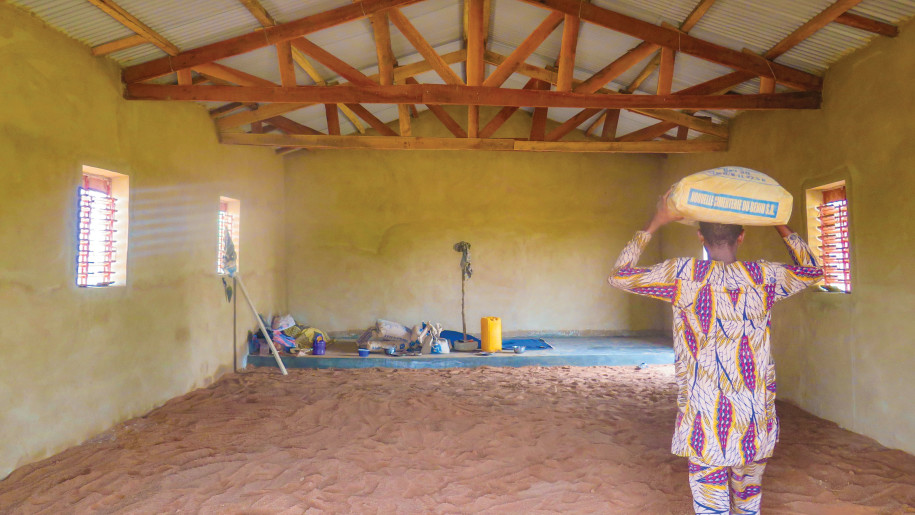 It all started with a big glass jar in a small church in Oregon. Bit by bit, money filled the jar. Bit by bit, they got closer to their goal of raising $10,000 to build churches on the AFM Pendjari Project.

When we got the news that the goal had been reached, we were overjoyed. The two new groups in Kountori and Mantalé would get churches! And the Tanguieta church would have a bigger Sabbath School classroom.

The group in Mantalé made 1,600 bricks, enough to build their church. We hired a mason to come up from the South, and before he came, he sent up a brick press that makes bricks using much less cement than a normal brick mold. We started buying cement, and he arrived and began to make bricks for us. When the Mantalé group finished making their bricks, we took the mason and his helper there, and they started building. We needed to make sure the building was finished and the mud bricks were protected before the rainy season started. We made several return trips to deliver cement, which was somewhat hard to source because of the pre-rainy-season construction boom. The mason worked quickly, and the Mantalé church’s walls were up in a few days.

The Kountori group was hard at work making bricks. It was interesting to see how they did it. They started by digging a broad, shallow hole, piling up dirt and wetting it. The next day, they mixed the mud with their feet, making sure all the lumps were stomped out, and then they started forming bricks. They put the mud into a mold with two handles on it, and then two people carried it over to the brick-drying area where it baked in the sun.

During this time, Coronavirus was beginning to emerge as a threat. Also at this time, our supervisors arrived for a visit. We took them around to visit the churches, carrying cement with us for the mason. Two days later, our supervisors had to rush back to the airport to return to the States before the borders closed.

We headed north again, praying that the area would stay open until we could get the churches built. I felt we needed to get the roofing material to the churches even if they weren’t ready for it in case we got shut down and couldn’t travel. So we delivered five rolls of roofing with all the needed items. We sent a bigger truck up with the long roofing beams. We then had to make a trip to haul all the metal doors and windows to the two churches. It is something like 120 miles one-way to Mantalé, so it isn’t a short trip.

By now the southern part of Benin was shut down, and travel was restricted. We felt new urgency to get the buildings up and roofed. Cement prices were rising rapidly, so we purchased two tons. (A ton of cement—20 bags—costs about $172.)

God provided, and before a big rain came and soaked everything, our two buildings were up. Now the roofs are on the two church buildings, and the church in Mantalé is being plastered. They are having water issues because there are so many building projects in the area that are using water. So they are hauling it basin by basin and jug by jug.

The church in Kountori is ready for the mason to plaster it. By the time you read this article, we expect that both churches will be completely finished. As soon as the government gives permission to reopen churches, we will dedicate them, and they will be in use. The Tanguieta church is piled with 10 benches waiting to be taken to their respective churches.

When the two churches are finished, we will start on the Sabbath School room in Tanguieta. It will be made of pressed cement blocks, so we can work on it during the rains.

We have been so blessed that God has protected our area from the Coronavirus and that we are still able to travel freely from village to village to get the building work done.