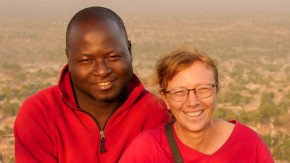 Career missionaries since 1999, first serving the Otammari people of Benin and now serving the Pendjari.

Suzy Baldwin-Noutehou started working in Benin, West Africa with the Otammari people in 1999. She learned their culture and how to present the gospel in the context of their culture and other cultures in the area. She used friendship evangelism, medical care and health education. She worked for many years with Ulrike Baur, another missionary with AFM.
During that time, Fidel Noutehou was also learning and doing evangelism under the mentorship of his uncle in another denomination. In 2007, God brought him to Natitingou and into contact with Suzy and other SDA members. Fidel would come and borrow books from Suzy, and that was their only contact for seven years.
In late 2015, God convicted Fidel of the Sabbath truth, and he joined the Seventh-day Adventist Church. Over the next seven months, God convicted him and finally Suzy that they were to be married and become partners in the work. They married in 2014 and moved to the Pendjari region of Benin to start a new AFM project. They live in a small village outside of Tanguieta on a farm where they have an agriculture ministry along with their work planting churches and mentoring local leaders of the various village church groups. There are now several church groups planted in two of the larger people groups and one church in the main town near Tanguieta.

Finally, Clarisse was able to speak. She confessed that Jesus was the Lord of her life. With more rebuking and praying, she was slowly able to get up and, even more slowly, walk around the room.