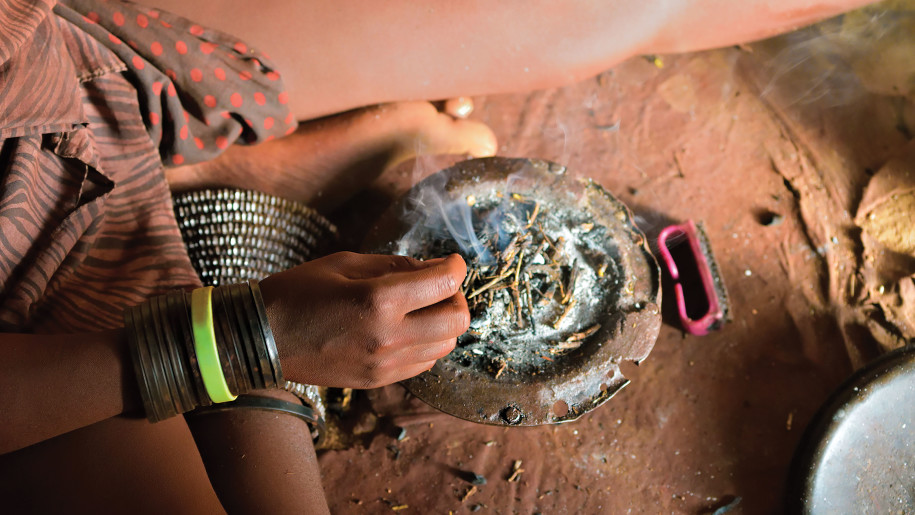 Lina is a member of the Yendi tribe. She lived in a number of different places as she was growing up, so she can speak about 10 different languages. When she and her father were living in another region of Benin, a neighbor lady gave her the spirit of sorcery. She fell in with a group of sorcerers, and in her sleep she would see herself traveling to various places and doing things with them. She could spot other sorcerers and would point them out to her father, but he told her to keep her mouth shut tell no one.

When Lina was a teenager, a demon began to visit her every night. After she married, the demon caused trouble in her marriage because it was jealous of her husband. She divorced and remarried, but the demonic harassment continued.
Then Lina met a man named André. He made a marriage agreement with her parents, and she became his wife. André was a kind man who happily took care of Lina’s child from a previous marriage.

During this time, André was studying the Bible with Fidel, and soon he accepted the Advent message and Jesus as his Savior. But, alas, his home was rarely peaceful because that demon was still with Lina. Also, Lina was involved with two sorcery groups, one in Tanguieta and one here in Sepounga. Several times André asked Fidel to help Lina, but she would never cooperate. André was serving as an evangelist with us, so Lina came to church with him, but it was always a struggle. The demons urged her not to go to church, and if she did anyway, they would cause her to fall asleep, or they would cause her baby to cry and fuss through the entire service, so she would spend most of the time outside. This great-controversy struggle continued in Lina for four years.

When another evangelist joined us, he and André started to fast and pray each week, and the demons in Lina started to react. Things finally came to a head one day in our corn field when Lina and another sorceress got into a fight. It turned out that the other lady had brought a bottle of human oil for Lina to put in her cooking, but Lina refused it.
Fidel prayed for Lina’s deliverance. The demons were very stubborn, and the hours stretched on. She huddled in the corner of the room, staring vacantly. However, she was able to explain about her involvement with the two sorcery groups. Finally the demons left, and she was free for the first time in many years. Fidel assured her that when she was in Christ she was protected from the other sorcerers. In fact, they would avoid her because the power of Christ is stronger than the power of Satan.

The chaos and violent tendencies that ruled Lina for so long are gone, and she has joy unlike any she has ever experienced before. The week after her deliverance, she attended the women’s ministry meeting, smiling and radiating more joy than I have ever seen in her. Her baby is now calm and smiley as well. Her middle son, seven years old, who had never prayed in Sabbath School before, has started to pray of his own accord. Peace has flooded into the family as God freed Lina from the terror of demonic control.

To anyone who thinks that sorcery is just a Harry Potter fairytale, I can assure you that it isn’t. It is very much alive and bringing torment to countless lives around the world. Here in our village of Sepounga, most of the ladies are involved with at least one sorcery group.

Please pray that the bondage-destroying power of God will be poured out here in Benin and everywhere else that demons hold people in chains.