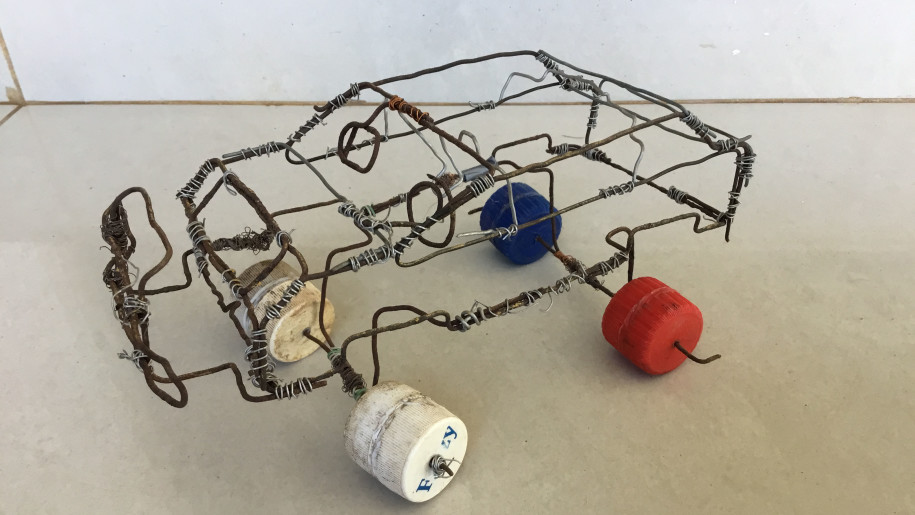 I have rarely seen a child in Mozambique with a toy from a store. Nor have I seen a toy box in anyone’s bedroom. “Don’t boys and girls play with toys?” you ask. Yes, but they play with homemade toys. In our neighborhood, the children are very creative, making toys to play with from scraps and trash they find left in the streets and dump piles.

I met two boys playing with their homemade toys, called galimotos, in the street near our house a few days ago. One boy had a motorcycle, and the other a car, both with drivers. They had made the toys themselves from stiff scrap wire they had discovered. The car had soda pop cans for wheels, and the motorcycle had two recycled monster truck tires for its wheels. Each boy had a long bamboo stick he used to push his vehicle, twisting the stick like a steering wheel to steer his toy. They had lots of fun speedily driving their toys along the street and in the sand. I was very impressed with their creations and asked the boys to make me one. A few days later, they came and knocked on my door and sold me a wire car just like the one they played with.

These boys are part of a group of children to whom I would love to tell Bible stories. They call me Tia Edileuza, which means Auntie Edileuza. Please join me in praying that the Holy Spirit will drive these boys into a knowledge of Jesus.