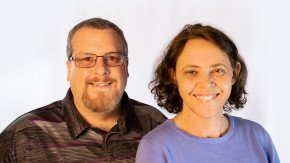 When Mina returned home, Tony’s threats became a reality, and he savagely beat her until she was able to escape.

The Blind Leading the Lost?

The Lord can use anybody in his work, even a blind lady guiding a group of sighted people. If we wish to be used by God, we need only to be willing and available—the opportunities will come.

We don’t know yet what God has in mind for Marciano. But we are thankful that the angel of the Lord protected our Bible study writer.

Sadly, this story of family misunderstanding and coercion is common among the young people of Mozambique

The family was very thankful for the prayer, and they continue to welcome Edie into their home. We will be helping and praying for our neighbors. Will you pray, too?