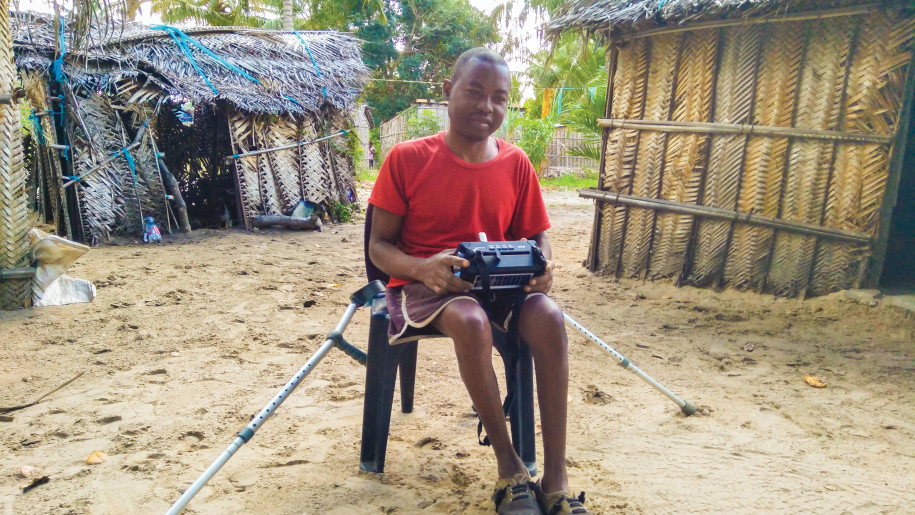 David and I regularly visit people who have disabilities and other physical needs. We try to make sure they have food, clothes, bedding, and a dry place to sleep. As we interact with them, we try our best to encourage them and brighten their day. Our objective is to figure out ways to nurture these people spiritually. We do our best to get local church members involved in helping them, too. We always offer to read the Bible and pray with them if they are willing.

A year and a half ago, we were invited by Joe, a South African missionary, to help him finish constructing a better house for one of the disabled families he knew. The house was constructed of palm-tree leaves and sticks. He had already poured a cement floor, and David was to help install a wooden door with a lock.

When we arrived, I saw an elderly lady sitting directly on the sand under a tree. She and her legs were quite skinny. I could see that her left shin had a nasty hole with a piece of metal poking out of it. I learned that a bullet had passed through her leg during the civil war and the exposed metal was a failed attempt to fix her leg. The wound had never closed up, even after 20 years. I tried to speak to her in Portuguese, but she could not understand me. Then I heard a voice coming from inside the cooking hut saying, “Mama doesn’t understand Portuguese. She only speaks her local language.” I left the woman to see who was talking to me and found a smiling disabled man sitting on the sand floor surrounded by smoke. “Thank you for coming to visit me,” he said in English as I came in. He was slicing vegetables on his lap and slipping them carefully into a pot of bubbling stew heated by a fire at his side. “What are you cooking,” I asked? “Nothing but boiled vegetables” (without seasoning), he replied. He then remarked that he couldn’t see me very well because his eyes were not good anymore. As we talked, I found out that his name is Fiago, and his mother’s name is Novelina.

Fiago is 40 years old and used to work in a gold mine in South Africa. He had aimed to make enough money to buy a house in Mozambique for himself and his mother. But five years ago, he started feeling very sick and became too weak to work. He was diagnosed with tuberculosis and sent back to Mozambique. Sadly, his vision quickly deteriorated to the point where he can only see shadows.

With concern, I asked Fiago if he was not afraid of burning himself if he cannot see very well as he cooks over the fire. Smilingly he replied, “I am not afraid; God gives me the grace to do the things I need to do. See,” he said as he pointed to his legs. “I don’t have strength in my legs anymore. Tuberculosis has attacked my spine and has crippled me. I have to be sitting most of the time, and I use crutches to go from place to place.”

As we continued to talk, I couldn’t help but be impressed by his faith in God. He had been studying his Bible before he lost his eyesight. He is not a member of a church, but quoting memorized Bible promises and remembering Bible stories brings him strength in hard times. He went on to say, “My friends have abandoned me, and my family helps only a little. It is Jesus who is always with me. I can talk with Him at any time. He is my friend. He never leaves me alone.” My heart was filled with wonder by this man’s cheerfulness and faith as we continued to talk for over an hour. I had come to this man’s house thinking I needed to comfort him in his severe back pain, but it was I who received encouragement. This man didn’t have wealth or health, but he had a positive attitude. As we left, we promised to keep coming back to visit him. He was a real inspiration to me.

We have returned to see Fiago and his mother many times. We always bring food. Often, I learn that all he has had for a meal is a cup of tea or a couple of dried minnows. No wonder he and his mom are so skinny.

On another visit, I sat in the shade of a tree outside their house, opened the Bible app on my phone and read encouraging passages to them. Fiago was excited to have the Bible read out loud to him in Portuguese. Again, I was struck by how positive Fiago was despite his disabilities. Not once did I hear him complaining about his pain or being unable to do anything but sit at home. I only heard praises coming from his lips. He kept talking of God’s goodness and mercies toward him and his mother. By the way, his mother, after many years of waiting, finally had the metal bar removed from her leg.

We discovered that Fiago enjoys distributing evangelistic books about the Sabbath. Whenever we visit him, he always asks us if we have more books for him to give away. He is well known in his small town, and his house is across the street from the local medical clinic. As a result, many people walk past his house, giving him plenty of opportunities to distribute all the books we can supply him.

Last month, when we visited Fiago, I could tell that all was not well. He seemed discouraged, and his words were not uplifting as they usually were. Although he had finished the tuberculosis medicine, his spine had continued to degenerate and his back pain was much worse. His health had deteriorated. He now goes to the bathroom in his bed at night without knowing it. Unfortunately, the health clinic cannot do anything more for him.

When we left Fiago, it was obvious he needed special encouragement and spiritual food. So, we decided to get him a solar speaker loaded with Portuguese hymns and sermons. Yesterday, we gave the solar speaker to Fiago, and he got so excited that he immediately turned it on, started a hymn and closed his eyes. When he opened his eyes and looked at me, I could see the joy written on his face. “Thank you,” he whispered. “I need this very much!”