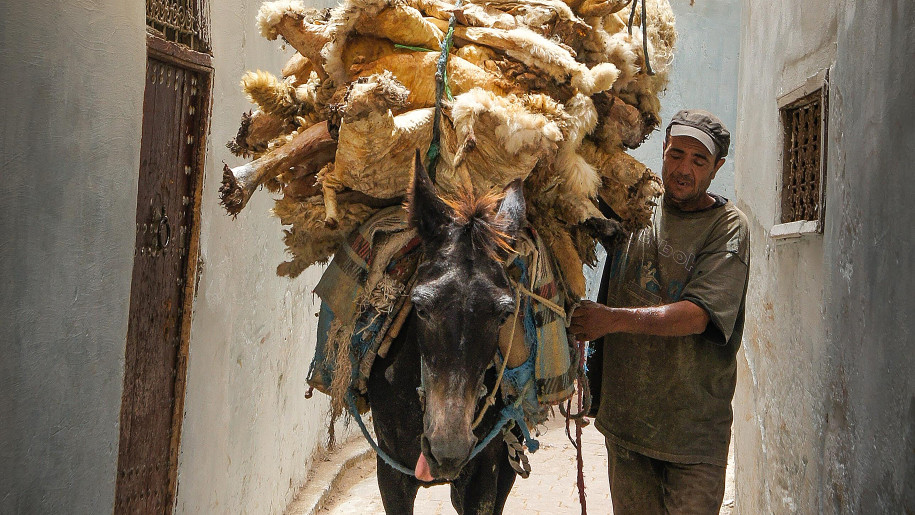 The Arabic-speaking Maghreb are descended from nomadic peoples of North Africa.

The Maghreb is the region of North Africa bordering the Mediterranean Sea. (Maghrebi is Arabic for “West.”) Originally called Africa Minor, at one time it included Moorish Spain. Now it comprises the Atlas Mountains and the coastal plain of Morocco, Algeria, Tunisia and Libya. The weather of the Maghreb is characterized by prevailing westerly winds, which drop most of their moisture on the northern slopes and coastal plain, leaving little for the southern slopes, which supports only desert scrub fading into true desert in the Sahara to the south. The Maghreb People project is located in the North Africa where fishing and iron ore are the principle industries. Tourism also plays a large part in some of the region’s economy. Dates, millet, sorghum, rice and corn comprise the agricultural products, and industries include fish processing and mining (iron ore and gypsum).

Tuaregs, Moors, Maghrebis, Berbers, Copts, and Nubians are among the people groups represented in North Africa. Many of these groups are descendants of nomadic peoples of times past and still carry-on this cultural heritage. Although sharing similar cultures and sometimes a very close ethnic and cultural heritage, there is often a division along racial, tribal, and clan lines. In some areas, slavery continues to be a fundamental part of the socio-economic fabric of some of these proud people groups, and their rank greatly affects personal relationships.

From the vastness of their mountain ranges, the native peoples of the Maghreb have resisted successive Punic, Roman and Christian invasions. Not until the seventh and eighth centuries was the Maghreb finally conquered. The Arabs imposed Islam and the Arabic language on the native peoples, thus absorbing them into the Muslim civilization. Despite this absorption, most North African societies have preserved their cultural identity throughout the centuries.

The languages spoken are influenced to a greater or lesser degree by Arabic and Berber dialects. The people of the Maghreb belong to both Berber and Arab ethnolinguistic groups. The Berbers are descended from the earlier inhabitants of the region and may trace their ancestry to Paleolithic times. Many other groups have invaded the area, including the Phoenicians, the Arabs and the French. About a sixth of the population of the Maghreb, mostly in Algeria and Morocco, still speak one of the Berber languages, but most also speak some form of Arabic.

The spiritual needs in these lands of the Sahara are great and there are souls even here, who are accepting Christ as their personal Savior.

AFM is sending out Bible workers and tentmakers into this region. Missionaries will test and evaluate various friendship-based approaches to influencing the Maghrebi people with the power and peace that resides in the gospel of the living, loving Jesus Christ. Additional outreach is conducted through lifestyle classes and counseling on healthy living.

The Month of March

Sunday morning dawned bright and early with a 4am wake up call from my stomach telling me it was very upset. I lurched to the bathroom and emptied the contents of my stomach in a very unpleasant manner…

“It is believed that listening to music, any kind, will take away time from reading and studying the Quran. It really is logical, if you think about it and study it. That’s what Islam is based upon. Logic.”
Whenever he tells me about a new rule, Ahmed makes sure to inform me that it’s logical and only for the wellbeing of the people.

The Dawn of the New Year

The year 2019 dawned gradually for me, in fact I feel that I am still barely recognizing that we are in the new year. In any case, we threw a new year’s welcoming party on December 31 (naturally). It was a simple get-together of friends and family to have some quick new years’ trivia, a delicious meal, and games.

Where are you, Christmas?

We had the Christmas party on Sunday, Dec 23. We spent most of the afternoon baking and decorating sugar cookies, decorating the terrace to turn it into as much of a Christmas wonderland as was possible (with the sun shining incessantly and warm weather, it didn’t quite look right to me, but it wasn’t too shabby), and arranging the gifts in preparation for the children.

“It doesn’t take much to be kind,” he said, “But so few people are.” I could not agree more. We found some common ground, after all. Sometimes it’s really hard to be a “witness” or tell people about my faith when I am embarrassed of half of us, often myself included. How many of us are genuinely kind people?

With November has come plummeting temperatures, reaching an all-time low (for me, here) of 10-12 degrees Celsius. I actually pulled out my thick sweaters these past few weeks. The cold really gets to you at night! But I am enjoying a little bit cooler weather (daytime still usually rests between 18-25 degrees).

Peppers Got the Best of Me

I felt like I was on fire. I don’t remember the last time I’ve been in so much hot pain (it’s been a while since I got sunburned; those 2nd degree burns hurt almost as badly, I think). I could NOT sleep for the life of me. If I laid still, the stinging heat would creep through my fingers to the fingertips and start festering. It seemed as if a million tiny nettles were attacking. I almost shed tears.

“Another Day of Sun”

Happily confident that I am finally going the right direction, I skip lightly as I listen to “Another Day of Sun” from La La Land in my headphones and prepare to cross the street.

A Collection of Reflections

Shopping was chaotic. Although most of the items were similar to what one would find in a European grocery store, the local store here is gargantuan.

A Birthday in Africa

My 22nd birthday dawned bright and early. I woke, extremely overheated, around 2:15am. I rolled out of bed to turn on the fan in my room, then rolled back in to see if I could fall asleep quickly. Not to be… 2:30am… 3am… 3:30am… the last time I checked the clock it was about 4am, and that’s the last I remember until the barks of dogs and singing of birds woke me around 9:30am…