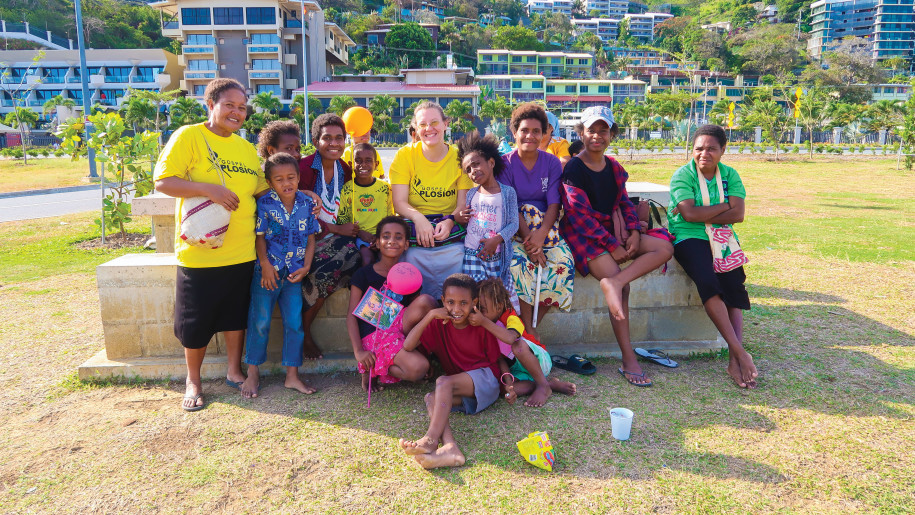 “You have to join us for the Gospel Explosion!”

We were in Port Moresby to get supplies and were visiting friends at the campus of Pacific Adventist University. Sabbath afternoon arrived, and we joined a large group of students and staff at the venue for the outreach activity, all of us wearing our yellow t-shirts emblazoned with “Gospel Xplosion.”

I began walking around and looking for someone not wearing a yellow shirt. Soon I found a group of young people. Dorcas is in high school, and she and her cousins had just returned from a long-anticipated day at the beach with their younger siblings. They showed me their dozens of small, sandy shells, a bottle filled with crabs that would have much preferred to still be in the sand, and a starfish that would soon find a new home in a plastic bowl filled with seawater at their house.

I played games with the children and listened to the teenagers. Dorcas has great dreams of completing high school and college and then becoming a doctor. The others were shy but enjoyed my encouragement as I listened to them. Later a man came by distributing kindergarten Sabbath School quarterlies, and I asked for one. Soon I was telling stories to the children about how Esther chose to obey God and saved her people. Their eager faces showed how much they wanted to help their own people. They are originally from one of the villages near Goroka, but they moved to Port Moresby with their families in order to have access to better jobs and education. They live in a squatter settlement. It is a hard place to live—overcrowded and less than safe. People move to the city looking for ways to improve their lives and their family prospects, but they find that without land for houses and gardens, life is very hard.

Finally, after yet another story from the “books” they now proudly owned, Dorcas said “We have to catch a bus now before it gets dark.”
They gathered together while I prayed for God to bless them and their families. Afterward, I hugged all of them and waved as they walked away. Turning, I bowed my head and started to pray for God’s continued blessing on these children. Then I felt a gentle bump on my elbow. I opened my eyes and found one of the children had returned to give me the bilum (purse) that her older sister had been wearing. I hugged her and thanked her with tears streaming down my face while I watched her run back to join her family.