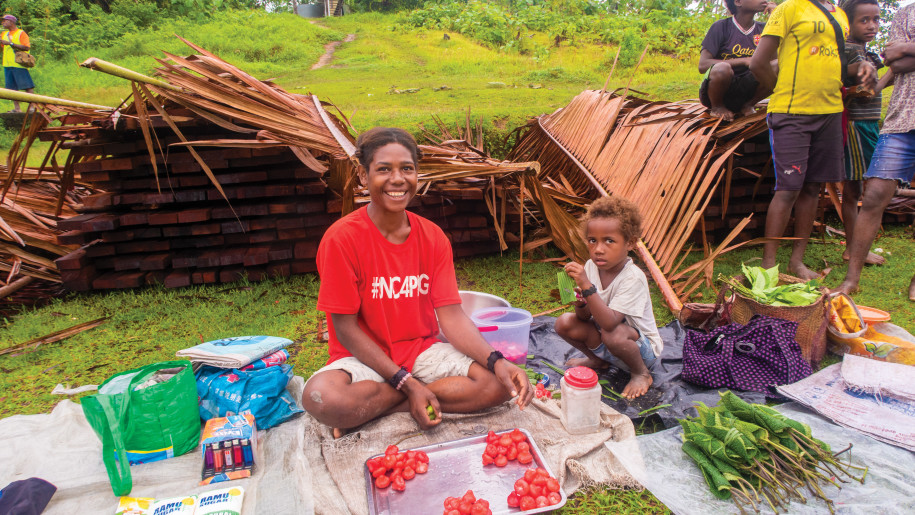 I meditated on this verse as I prepared for our town trip. What does it really mean “to whom it is due?” Does that let me off the hook for all of the “I want something for free” requests? Or is there something more?

That afternoon, when our canoe driver came to carry our bags down to the fuel shed for easy loading the following morning, he suggested that I go to the afternoon market. “They are selling the sweet red water apples for 10 toea [about three cents] per handful,” he explained. I realized those would make a tasty addition to our lunch and the lunches we provide to our two crew members.

When I arrived at the market, I found a little bit of sugarcane, dried fish, greens and a few things people had brought from town to sell. I asked about the water apples, explaining that I wanted some for the canoe trip the following morning. “Sorry, those are all gone,” said one of my friends from church. “Take a few of mine,” she smiled, placing some in my hands. Immediately, another woman I do not know gave me an even larger handful. Neither would accept payment. The woman who had sold them told me that she would bring some the following morning so we could eat them in the canoe. As I returned home munching on the crunchy fruit with a hint of sweetness, I thanked God for giving me a glimpse of the meaning of “Withhold not good,” when I knew that nothing had been due to me.

The next morning as we got ready for our all-day canoe ride, we were greeted by a group of 20 or 30 community members who had come to see us off along with our two crewmen and their wives and children. We would also be transporting a man who needed some medical testing in town, and his teenage son was coming along to care for his father if needed. The woman with the water apple tree was there with a bowl filled with freshly picked and washed apples. Again, she would not accept payment. I thanked her as well as I could. I climbed into my place in the canoe, and soon we were waving goodbye to the people on shore as we motored away. I shared the fruit with everyone aboard, and there were enough for all of us to have as many as we wanted.

Motorized canoes travel like any other boat, sending up a spray of water on both sides, some of which ends up in the canoe. After an hour or two, I was surprised to realize that the wood under me was still completely dry. Then I saw that the man we were transporting had an old rag and was mopping up the water and wringing it back into the river, keeping us dry. His son stood in the front of the canoe and did most of the work to help us safely navigate the narrow shortcuts.

In these two I saw a picture of “when it is in the power of thine hand to do it.” These men had asked to ride for free because they would need their money for the incidentals and possibly even for treatment of the man’s illness. But they were faithfully doing what they could to contribute.

That afternoon as I again meditated on Proverbs 3:27, I asked God to help me see opportunities for doing good “when it is in the power of my hand,” even when I cannot see why it is due.