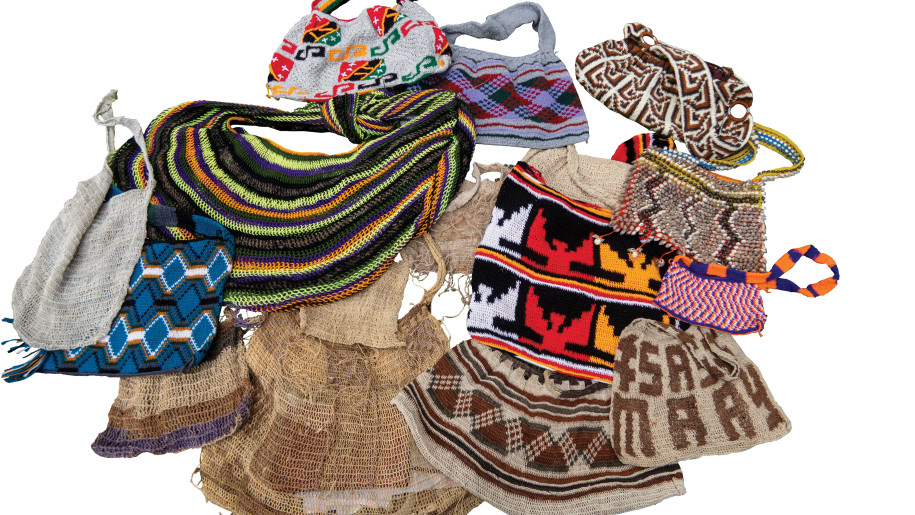 Although there is traditional dress in Papua New Guinea, it is usually reserved for special occasions. “Bilums” (pronounced: bee lum) are equally distinctive, but they are worn and used all the time.

A bilum is functionally a purse or carry-bag. They range in size from a wallet up through a baby-carrier on to a bag large enough to carry a couple of stalks of bananas to market. The most common sizes are those of a purse or book bag. They are used by both men and women.
Children wanting to imitate the adults will get their mother’s bilum and drag it around the house. Children are given a bilum while still quite young. They use it to carry their own treasures and may wear it everywhere they go.

Men often have smaller bilums, which they wear around their necks, hanging in front of their chests. It is much harder for a pickpocket to steal from this location. They cannot be encumbered with a large heavy bilum when they need to have to have their hands and arms free for fighting. Common items to find in a man’s bilum include money, tobacco, betel nut, a spoon and an ink pen. Now, in a more modern age you would add a cell phone, maybe its charging cord, your debit card and driver’s license. Plus, include candy for your children.

Women’s bilums are often larger, some tightly made. They may have a smaller bilum or “wallet” inside, or even a plastic bag, which contains their money. Their bilums usually contain a spare diaper, snacks for their children, and often, but not necessarily, a small homemaking project. As any mother’s purse does, it will soon contain many small treasures from their children.

Special longer, shallow bilums are made for carrying babies and small children. Sometimes they are carried on the front around the neck; other times they are carried on the back. Many times, I see a family selling things under a tree, or fishing, while a toddler takes a nap secure in his bilum hanging from a short tree branch.
Larger bilums often have larger, looser stitches. They are used to carry farm produce to and from the market, and any number of other things. Cooking pots, sleeping mats and everything else needed for a church campout will usually be carried in a large bilum.

It is perfectly appropriate to wear several bilums at once: a small one for your money and essentials, a larger one for your books or other important items, another one for the yarn and things you are using to make a new bilum, and a huge one for carrying the vegetables you plan to buy in the market.

The process of making a bilum includes an endless series of knots. They do not use a “slipping loop.” Instead, each stitch is pulled through the next one. This makes for very secure material. Historically, bilums were made with the inner bark of several types of trees, small shrubs, and grasses and dyed with plants, seeds, fruits and colored clay. When acrylic yarn became available, it was very quickly adopted as it is softer and easier to work with and has vibrant colors.

Each region developed its own special patterns, with its own name and special tricks for doing it just right. Because the patterns are local, you can tell where someone is from simply by looking at the pattern and colors in their bilum.

Bilums are used as gifts to express appreciation and to give honor to a speaker, leader, presenter or honored guest. They may be re-gifted.

When I first arrived in the town of Wewak, I was using the first bilum I had been given, an eastern highlands pattern. Everyone was pleased that I was a PNG lady and wearing a bilum. After several months, one of my friends from a village near Wewak said “You need to have a bilum from Yangoro” and gave me a white bilum with red and green stripes. I transferred my cell phone, wallet, keys, and emergency medical kit into it and wore it to town.

When I walked into the market, I was greeted with, “You are a nice Yangoro lady! I’m from Yangoro, too!” My welcome was much stronger now that I was wearing a distinctly local bilum. I also felt their eyes on me everywhere I went. I knew that these Yangoro ladies were going to make sure that I was cared for.
One day I was talking to a friend from our local church. “I need a coconut scraper,” I said.

“My son can make one for you.”

“Sure! What do I need to pay him?” I responded. I wanted the kitchen tool, but I wanted to make sure I wasn’t going to be in debt to the family.

“You can just buy a blade at the hardware store, he has enough wood to do it.” She answered.

“Do you know how much they cost?” I didn’t have time to walk to the store, buy the blade and bring it back to her that morning.

“Could I give you the money for the blade and you give that to him and ask him to make it?”

I handed five Kina to her and proceeded to complete my shopping for the day. A bilum filled with garden produce gets heavy!

In her hands was the first two inches of a red, green, blue and yellow bilum. “It is pretty,” I said.

“I took your five Kina and bought some yarn to make you a Yawasoro bilum” she explained.

“But, you need at least four times that much yarn,” I answered. “Do you want me to give you more money?”

“Don’t worry, I have enough yarn.”

Every time I have seen her in the market since then, she has shown me my Yawasora bilum; it is taking shape nicely. Soon I will have another bilum to wear, labeling me again as a local.

Eventually I will also get a coconut scraper.

The closer I can connect to my local cultures, the easier it is for me to share the gospel. When they see Jesus in me, wearing a bilum carrying vegetables, they know that Jesus is approachable. I want to share His love with those around me.