Fifteen November 2019 will forever be etched in my memory as the day Pekwe burned.
As I watched from my kitchen window my thoughts went between concern for the lives of my friends, and the complete devastation I was seeing happen because some people were willing to allow their anger to run un-checked. 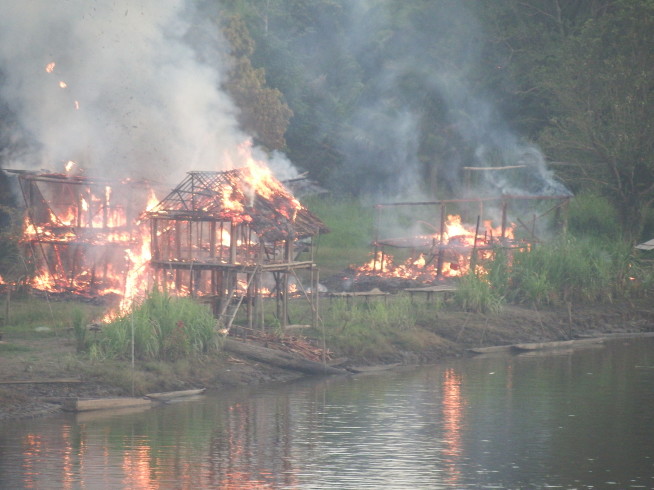 Praise God! No lives were lost in the fires.
In all, twenty seven homes were completely destroyed.

This photographic journey is designed to show you how we travel, and tell the story of what happened, and what AFM has done for the villagers since the tragedy. 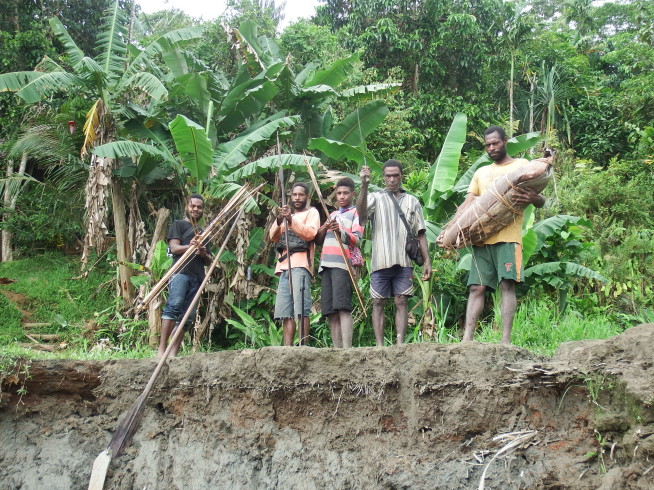 Young men, armed with bows and arrows, one of them has a bundle of food. .

Because of the local unrest, we traveled by float plane to Wewak until it was safe to return to the village.
Men whose houses had burned, and others who were closely related to them volunteered to take us two hours downriver to where we would be picked up. Nearly twenty well-muscled young men accompanied us.
(NOTE: neither air travel, nor having twenty village men as security guards are a normal part of our trip, these were extra safety measures due to the active threats against anyone from our village traveling beyond a certain point on the river). 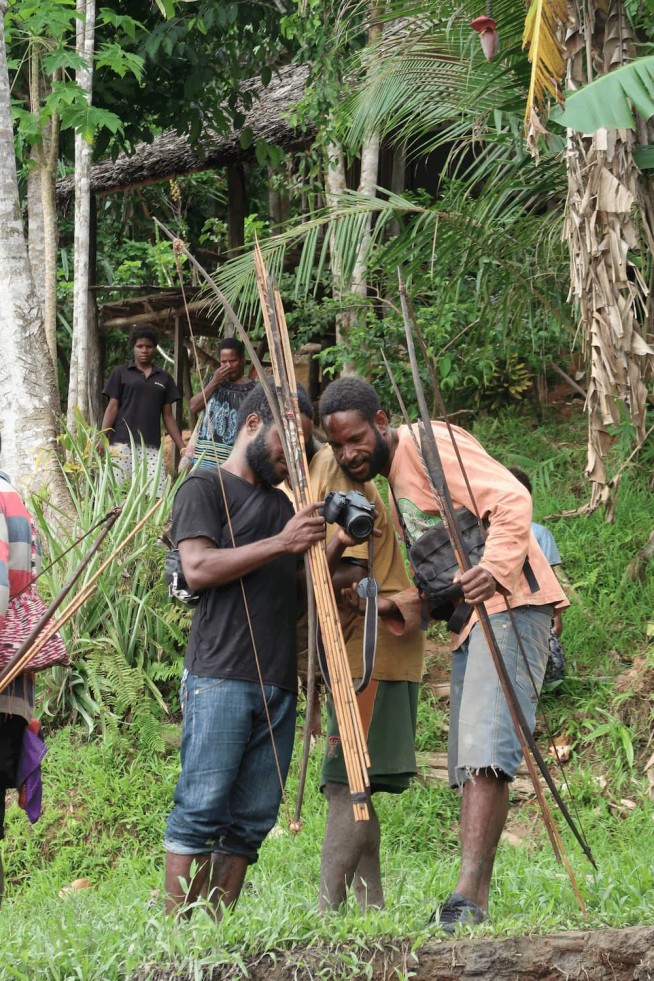 Ancient technology meets modern. As our friends look at their picture on Orion's camera screen.

These men are some of our “security guards” that accompanied us to where the float plane would pick us up. They spent their entire day traveling downriver with us, then back up after seeing us safely off.
Neither they nor us knew how soon we would return to see them again.

In town, we purchased many things that would be helpful for our homeless friends. And found someone who could safely transport them and us upriver. 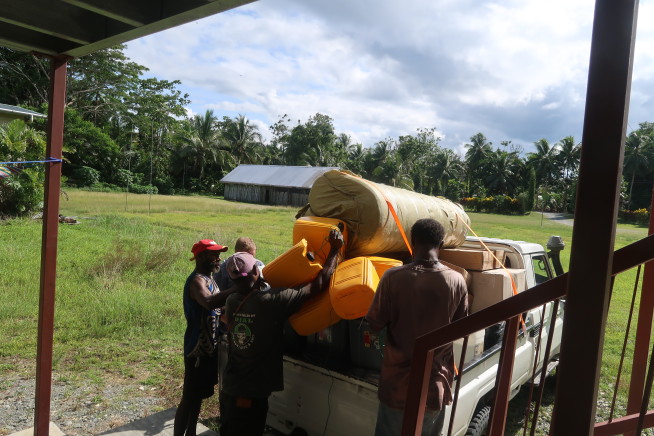 A truckload of supplies, ready to go to the river.

The businessman who we hired has several canoes, and plenty of helpers for loading our supplies. 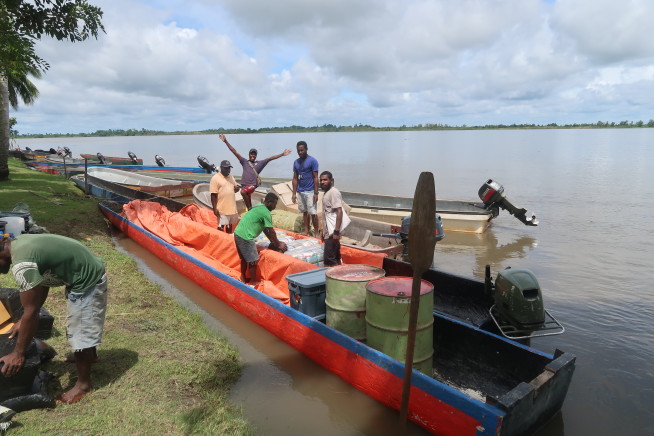 A tarp is put in the canoe, the boxes are stacked inside, then the tarp is tucked in around it to stay dry. 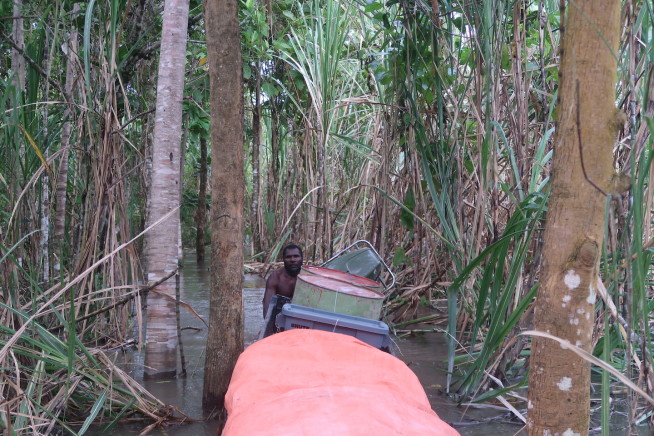 Our driver and helper pushed us through a flooded forest when they discovered that there was a logjam in a shortcut. 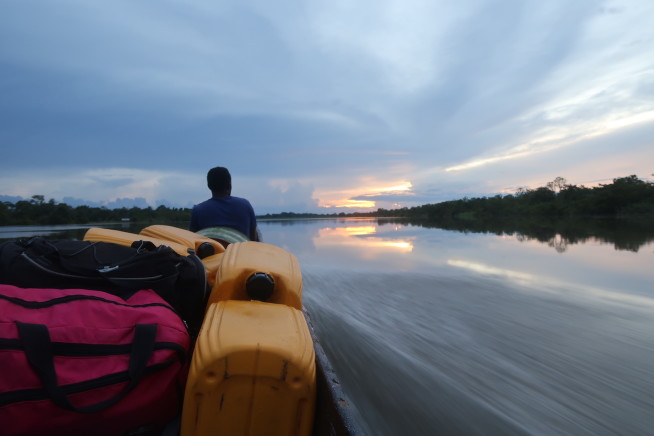 The main channel of the river is wide open.

Keren!!!!
I heard a shout as one of the women on shore spotted who was inside the somewhat unfamiliar canoe on the river.
A few minutes later we stopped in our usual “canoe tying” place, and small canoes were paddled up to where we were to help us unload everything into our fuel shed.

The community elders explained that the best place for distributing everything was in a little settlement near the village, where many of the community members were living until they could finish rebuilding their own houses.
We agreed to their plan, and asked for a ride to where it would happen, so that we could take pictures and share this story with you. 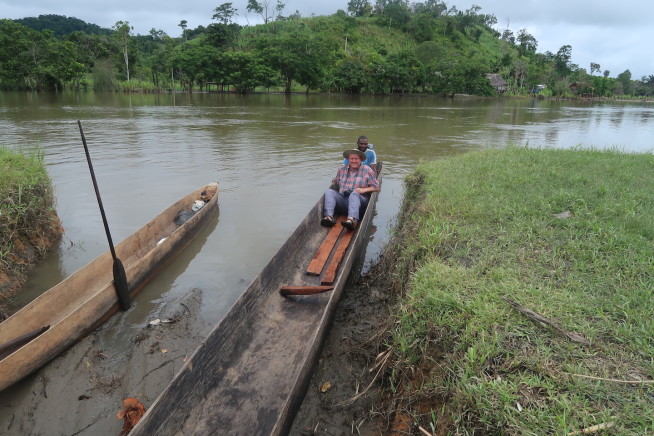 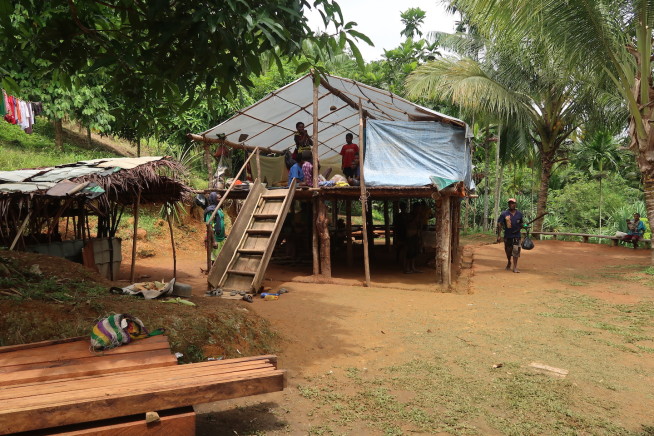 One of the "temporary houses" constructed for the displaced families. 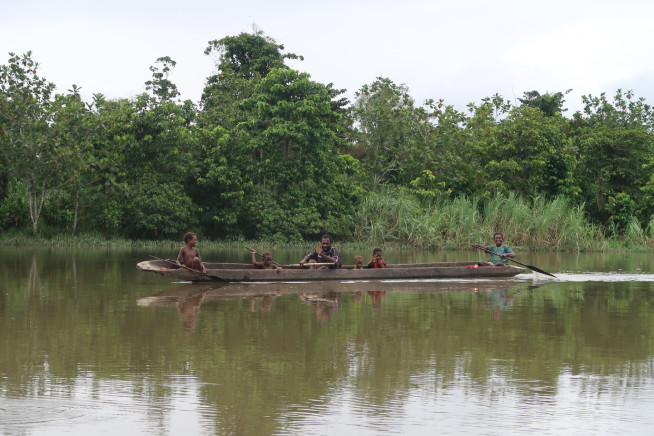 A family canoe, paddling to the meeting place. 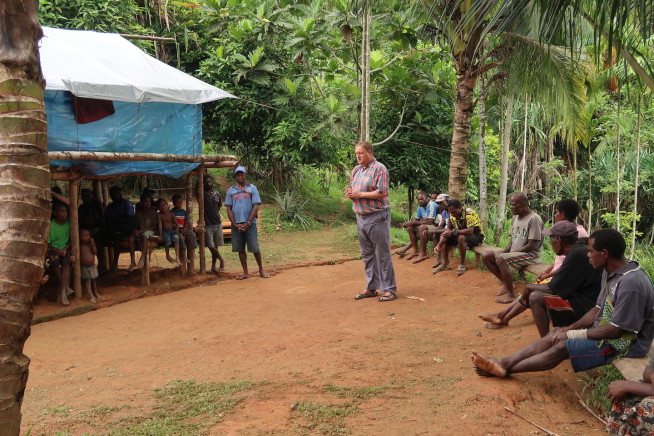 Everyone gathers to listen to speeches.

“Your friends in America have shared some things with you, because they care about you and are praying for you” Was part of Orion’s speech.

In the “response speech” from the community leaders.
“Please tell our friends in America thank you very much for your gifts, they will help us to live better while we rebuild our houses. We love you. and God bless you” 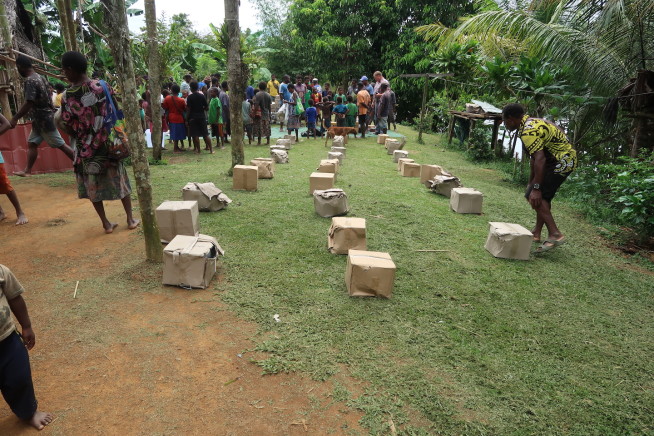 Everything was divided equally into piles, starting with a box of cooking pots. 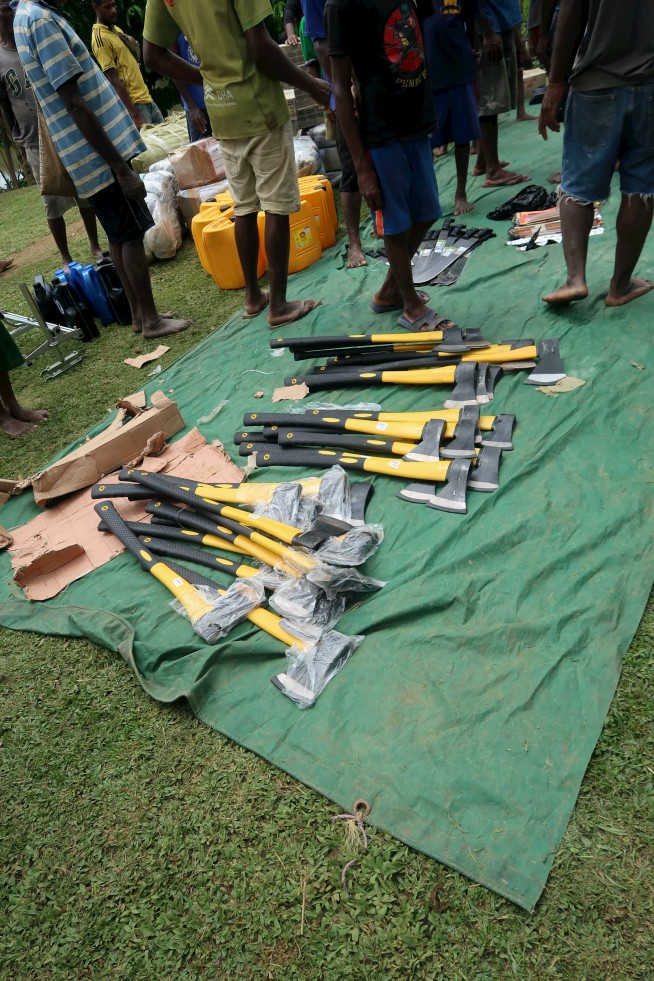 The Axes and Machetes, (along with files for sharpening them) were a welcome sight. 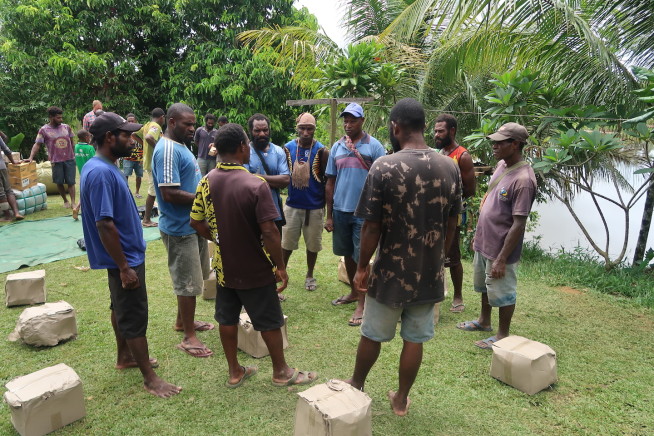 Several times, the community elders stopped to discuss how this distribution would be done.

We were very grateful to the community elders for taking charge of the distribution.
They managed the logistics. Counted, checked, and made adjustments according to the needs of each individual family.

In addition, these men accepted responsibility to handle any quarrels that might come up in the future if someone felt they were treated unfairly.

We gladly left this work to the community leaders.

There was plenty that we could do to help, and a good portion of our reason to be there was to visit with the people as much as possible. 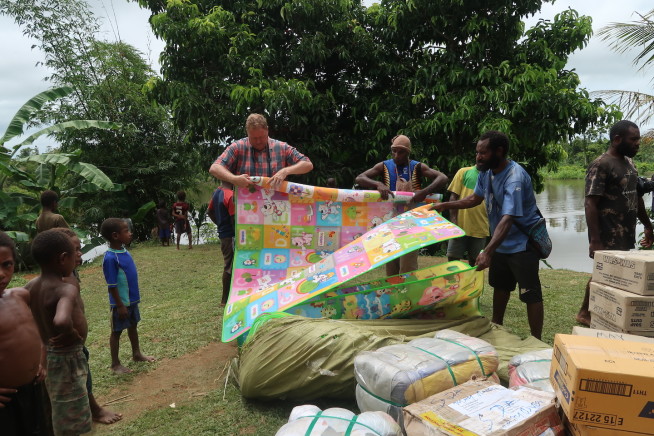 Orion helps roll sleeping mats to add to the piles. 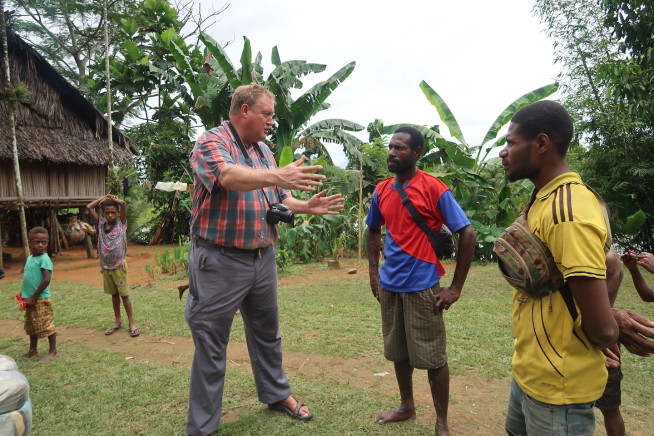 Orion talks to several men while others are distributing supplies. 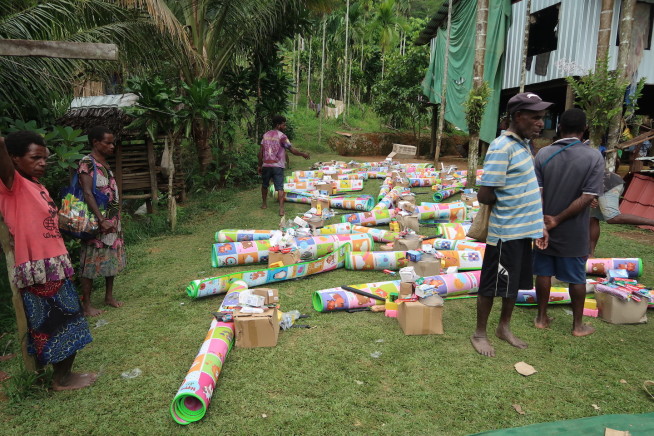 One of my memories is of watching a community leader, who is also the church treasurer, carefully count out the nails individually to be certain that each family got the same amount. 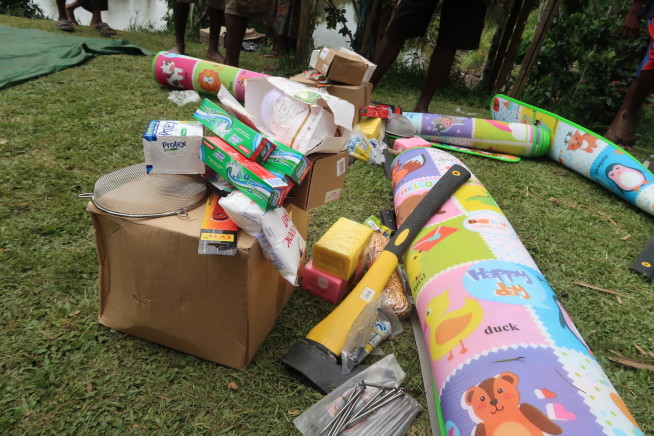 After everything was distributed, the new owners eagerly collected their things and carried them to safe dry places. 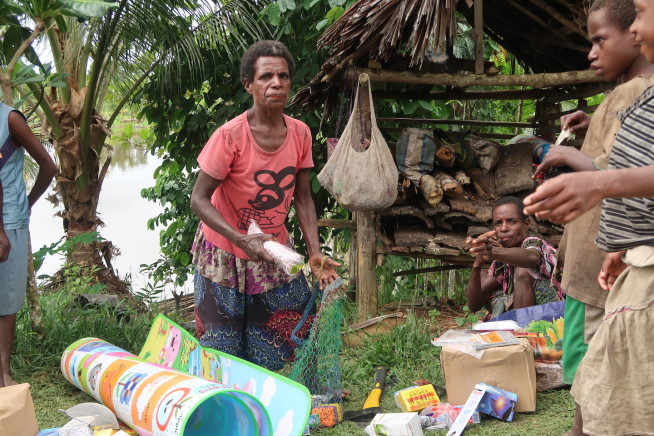 A woman packing her families new things in a string bag. 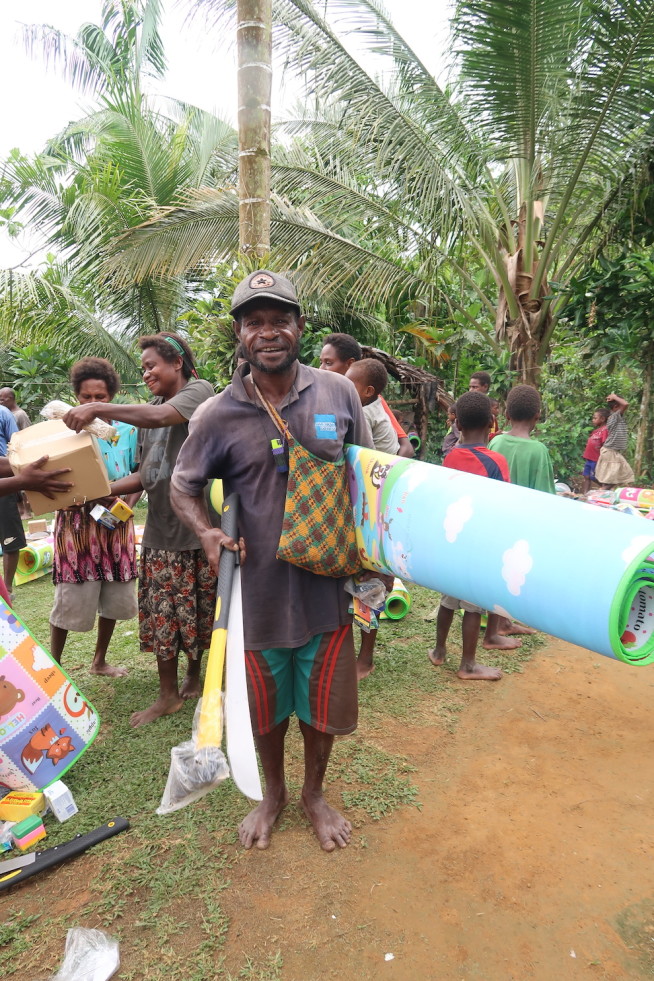 A man carrying his new possessions

As we left, we looked at the new posts standing in the ground. Micah, our canoe driver is building his new home beside the burned down remnants of his old house. 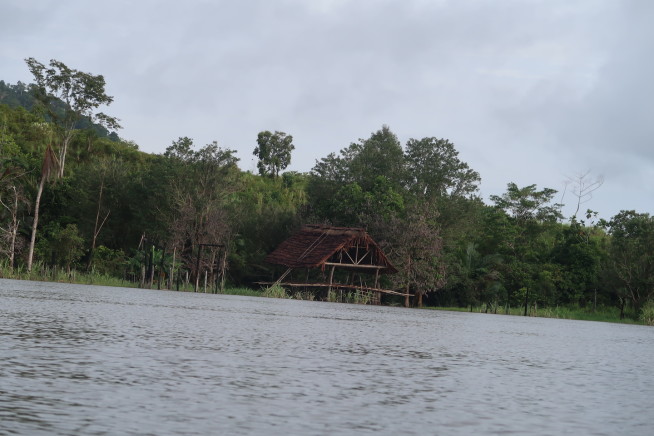 Micah's new house stands beside the burned pillars of his old house. 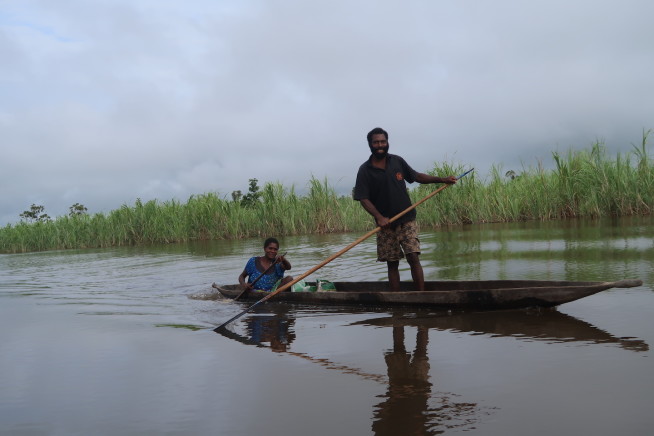 Micah and his wife Delilah paddle to the middle of the river to shake hands with us one more time as we leave.

Thank you for sharing this journey with us.
May God bless you,
Orion and Keren Lawrence