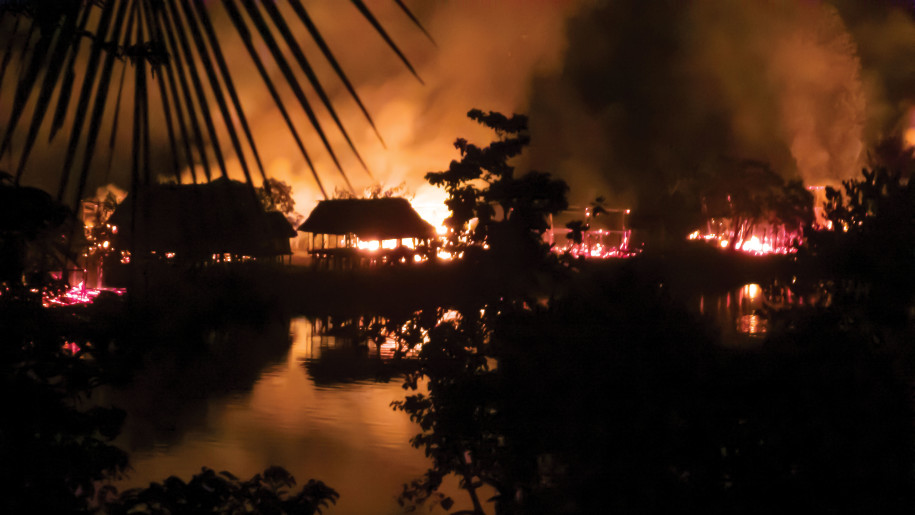 I glanced up from my kitchen sink once more through the evening gloom at the orange glow coming from the houses across the river. It is normally a peaceful sight that I enjoy almost every evening—the battery-powered lights shining from the windows of friends’ homes in my treasured village. But this glow was a deeper, redder color. This was the glow of the dying embers of 27 homes, now burned to the ground. Tears filled my eyes and splashed into the sink as I recalled the events of the day.

At two this morning, I was lying in bed awake. The previous evening’s dose of malaria medicine had left me sleepless, and I had spent a good portion of the night praying. Then I began hearing voices in the night—angry shouting and the melodic, whooping calls of the local dialect as women from one side of the river bounced their voices over the water and made themselves clearly heard to those on the other side. The volume grew as men’s voices joined in. Something was wrong. I redoubled my prayers and woke my husband. “Orion, there is a big fight going on in the village.” He went out to gather news.

“There was a drunken fight in Pekwe,” he told me when he returned. “Some young men asked the clinic boat driver for fuel. When he said no, they started a fight, and one of them was stabbed in the heart. The clinic nurses couldn’t save his life. So now his drunken friends are threatening to burn down the clinic and the nurses’ homes. I told all the nurses to come and stay in our house.”
The nurses and their families soon arrived, and I put foam mattresses on the living room floor and brought out sheets and pillows. The children were soon settled in for the night, but the adults sat and talked worriedly.

“Ani’s house is burning,” someone said a few minutes later. I gazed out the kitchen window to see his large, beautiful house outlined in vivid orange as flames engulfed the dry sago-palm-frond roof. The wall boards, made of the strong bases of palm leaves about eight or nine feet long, dropped away as their vine lashing burned. The blazing roof slid off, revealing carefully crafted beams of ironwood. The palm flooring and its supporting joists succumbed to the inferno, their charred remains falling to the ground beneath. Within minutes, all that remained of Ani’s home was a few smoldering pillars and beams standing watch over a pile of glowing coals.

Not far from Ani’s home was our church, made of the same materials. I could only pray that God would send His angels to protect His house.

Soon, I saw another house burning, this one across the river. Then another and another. Screams and shouts filled the air as villagers rushed for safety. Some ran to their canoes and paddled downriver. Others ran into the jungle to hide in their gardens.
I heard banging coming from the clinic fuel shed, which is very close to our fuel shed. This fuel was our only means to get downriver. Together, the sheds held nearly 200 gallons of fuel. If one shed was set on fire, both would burn explosively. Praise God, the banging soon stopped.

More fires sprang up across the river, sending showers of cinders into the air that soon set fire to neighboring roofs. I kept praying for my friends. I especially prayed for our canoe driver whose house was downriver where several houses were burning. Later I learned that, at the first sign of danger, he moved our 40hp motor from under his house into our large canoe where our two 75hp motors were in place, and with his daughter he motored to a place of safety. At first light, he returned to his house on foot, only to find it fully engulfed in flames. When two of the troublemakers spotted him, they tried to kill him, so he ran for his life.

Hours passed as I watched from my window. It seemed that every house I could see was on fire. As the sun came up, it shone on charred beams, scorched trees and so many houses still burning. Orion had been communicating with the Adventist leadership in town and with the AFM home office, which immediately started a prayer vigil.

Finally some of the community leaders from upriver came to our house, asking to use our satellite phone to call for the police. Some of them were fathers of the young men who had started the trouble, and they were trying to find a way to keep their sons from suffering punishment. They also told Orion that they had told the boys, “The clinic, nurses, missionaries, and anything that belongs to them is off limits.” The boys had listened. Although our boat shed door was broken in half, and a few things were stolen, and the clinic boat shed had also taken a beating, the boys stayed away from the nurses and missionaries.

Through the morning and into the afternoon, a motor canoe full of angry young men zoomed up and down the river, checking to see if anyone from Pekwe had come out of hiding. They were declaring that, in order to get even for the death of their relative, they would kill five people from the village that had killed him. I kept hearing the roar of their boat as I unlocked our safe and packed our passports and money into an emergency “go bag.” Then I got another bag for mosquito repellent, sunscreen, food, long-sleeved shirts and a water filter. What was the most important thing to pack? It was a long, hard day.

In the afternoon after the boat patrol ended, Orion and I walked down to look at Ani’s house. It was completely destroyed, with coals still glowing. Farther on, we came to one of the few remaining unburned houses. The family was feverishly at work removing the solar panel and battery. “When the family of the dead man gets here, they will see this house is still standing and will burn it down,” they told us. “So we are removing everything we can carry and hiding it in the jungle so it won’t be destroyed when our house burns down.”

Now I stand at the sink. It is dark outside, and the orange glow of my friend’s smoldering house flickers brighter and dimmer. Up and down the river, the same sad scene repeats. These are people I came to serve, people I love. So much needless suffering! How many more villages will be burned in retaliation? What does the future hold for these people whose lives are so enmeshed in the “payback” mentality that entire villages must burn and lives must be snuffed out? Who will stop this rippling wildfire of revenge? These people carry grudges for years, and anger can boil over in an instant. Hidden just beneath the surface, it leaves church members sitting under the same roof feeling miles apart because of an underlying lack of trust. There is no need for such senseless loss! Jesus came to teach love, forgiveness and repentance—the opposites of hate, retaliation and payback.

My tears dripped into the sink as I cried out to God, the only One who has answers for this cycle of brokenness. Someone needs to tell them! Then I heard Him whisper, “Whom shall I send?”

I bowed my head and replied “Here am I. Send me.”

_UPDATE:
The family of the dead man is from many hours downriver in Ambunti. They did not destroy anything in Pekwe or Abagasu. Instead they took revenge on anyone from May River living in Ambunti, burning houses and locking up boat motors. They announced that no one from the May River area would be allowed to travel the Sepik River past Ambunti. This effectively closed our avenue for traveling and transporting supplies. We evacuated by floatplane to Wewak where we can communicate with the mission officials and support the May River and Ama people from a distance. We are praying for resolution so that we can again travel the river and spend time in these villages where God has called us to serve._