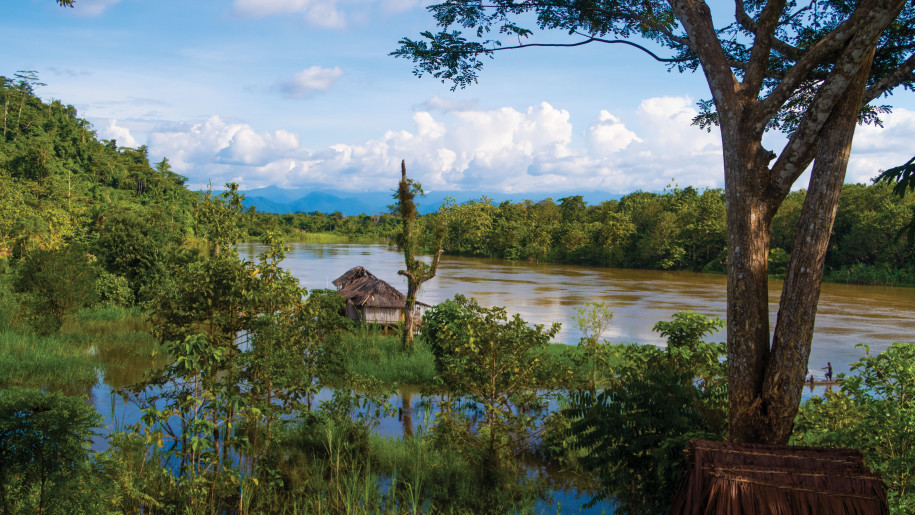 Knock! Knock! Knock! I opened my door one Sunday morning to find three anxious faces. “Please, we need to use your phone to call Saman.” As we hurried to where we have our satellite Internet dish set up, I got the full story.

On Friday night, a man had been drinking and got into a fight with someone else in the village who stabbed him in the side with a pig spear. Sabbath morning, they carried him mile after mile through the jungle until they finally reached a village that evening on the May River. They stayed in that village Sabbath night and then brought him down to the clinic on Sunday morning.

Generally, we leave the medical work to the nurses. We pray with patients and provide meals for those in need. Keren helps with the weekly prenatal clinic whenever she can. Our most important support for the nurses is our satellite Internet connection, which allows us to make phone calls, especially in emergencies. Samaritan Aviation (Saman to the locals) is an evangelical mission organization whose float plane delivers medicines and medevacs patients who would otherwise die in the bush. This plane is based in Wewak and has carried hundreds of patients out of the Sepik River area to the hospital in town. The May River Clinic is the remotest outpost it serves.

When I finally got through to Saman, I learned that the aircraft was undergoing repairs, and they hoped to have it flying by Wednesday. I let the family know that a medevac flight was not available, and I went to examine the patient.

While I was trying to make phone calls, the only nurse at the clinic called Keren to assist her with a difficult twin birth. The nurse was trying to attend to the woman and the spear-injured man, both of whom really needed a higher level of care than she could provide. The mother had delivered one of the twins, but she was bleeding heavily. Wearing a pair of borrowed flip-flops, Keren stood in a widening pool of the woman’s blood as she examined her. Determining that the unborn twin had died, she wished in vain that Saman was on the way.

Meanwhile, I examined the wounded man with the clinic stethoscope. His left lung seemed to be filled with blood. The spear head had passed through his left arm before entering his chest. He had lost blood, but his blood pressure was currently stable and in the acceptable range. The nurse had started a saline IV, but seeing that it wasn’t necessary, she disconnected it. He wasn’t going into shock. This was very good since our only option was to send him first to the clinic at Ambunti six or seven hours away by motor canoe. From there, they would take him two hours to the end of the Sepik Highway and arrange for an ambulance to drive him an additional four hours to the hospital. I was afraid that if he just rode in the back of a flatbed truck, the six hours of bouncing and jolting would most likely kill him.

As I walked to where his family was huddled, I was quickly running arguments through my mind. I needed to convince them that the best option for saving his life was to take him by canoe and road to the hospital. They had been hoping for a one-hour plane ride. But since that wasn’t an option, would they be willing to go through the trouble and expense of transporting him even though there was a good chance they would just have to bring his body back for burial? If he was going to die anyway, they might as well take him back to the village. No matter how much they loved him, the cost of all that travel could easily exceed $1,000, and the entire family might not have that much combined. In America, we spare no expense to try to save a life, but here in the bush they don’t have that luxury.

Two men from his family agreed to go with him, and I gave them 150 Kina (about $45) to help a bit with expenses. I had already scheduled our small canoe to go down to the end of the Sepik Highway the next morning, so it was easy for us to send the patient down with two of his relatives to look after him. They carefully carried him to the canoe. The goodbyes were poignant, with most of the family sure this was the last they would see of their loved one.

Meanwhile, as the woman continued laboring and losing blood, Keren kept praying. They had already administered a liter of IV saline, and the woman was still becoming less and less responsive. After the second liter, the mother began to regain strength but was still in grave danger. When Keren asked if there was any more fluid, the nurse ran to the room where the spear victim had been and brought back the remainder of his saline bag—the last one in the clinic.

God gave the woman a burst of strength, and she was finally able to deliver the dead baby and then the placenta. Her bleeding slowed, and she began to regain strength. Two days later, she went home with her surviving child, a little girl whom she named Keren. They visited us when they came back for their one-month checkup. Both were doing well.

A couple of weeks after that fateful day, we called a friend who works at the hospital in town, and the spear victim was able to speak with his family. He still had a surgical drain to remove fluid from his lung, but he was on the road to full recovery.

Life here in the PNG bush is often slow and peaceful, but it is also uncertain and full of challenges. People here have a hunger to know the true God. We thank you for your prayers and support that enable us to be Jesus’ hands and feet to these precious souls.