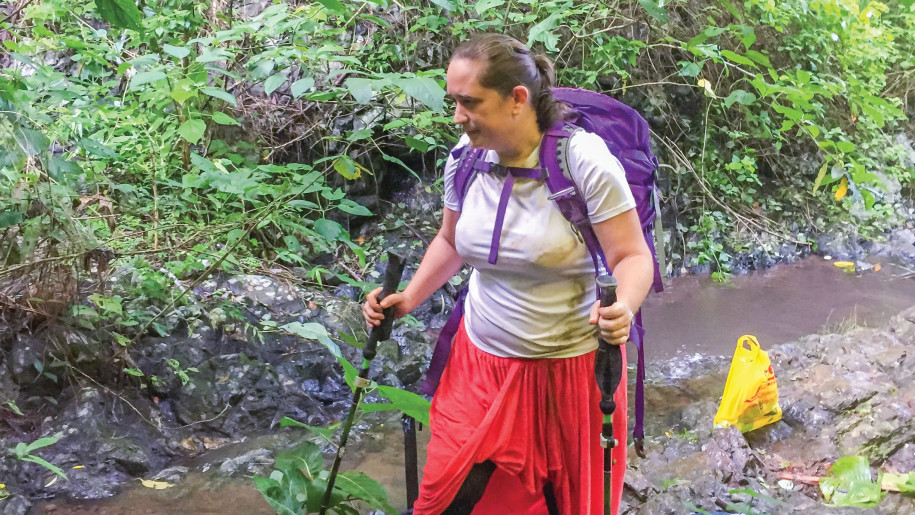 “But they’ll laugh at us daddy,” Luke voiced his fear.

“No they won’t laugh at us,” I assured him. “They have to haul their water from a spring as well.” It turned out that I was correct—our Palawano neighbors didn’t laugh at us. But what they did do surprised me.

Yes, you read that right—we have Palawano neighbors! Since arriving in Palawan, our job has been lowland support. We have shared in past articles about the Palawano patients we have gotten to pray with and assist in the lowland hospitals. We studied Tagalog, the language of the lowlands. We also got to learn some Palawano as we interacted with our patients. Wanting to do more intensive study in Palawano, we hoped to spend some time in the mountains, and God recently opened the door for us to do just that.

After a steep six-hour hike, Sonya, Luke, Lily and I arrived in Kemantian. I was very thankful for the student who carried my 46-pound pack the last 15 minutes! We moved into a bamboo house next to the clinic, and I have enjoyed taking part in clinic work for the past three weeks. I have seen many of the patients I cared for in the lowlands and have met many more as well. Just today, Migni, the father of a little girl I helped in the lowland hospital, stopped by and gave us some vegetables. I was thankful for his kindness and thrilled about the vegetables as they are sometimes scarce here in the mountains.

Last Friday as we were beginning our Sabbath preparation, our water stopped flowing as we were washing dishes at the sink. We checked the water tanks, and they were empty. Perhaps the pipe that brings water from the mountain spring was broken? The electricity had previously gone out, and now we had no water either. God helped me not to give in to the discouragement I was feeling. We would just have to haul water from a neighbor’s spring. It was this that caused Luke’s concern that our neighbors would laugh at us. But to my surprise, our Palawano neighbors saw what we were doing and immediately started helping us carry water. My burden, both physical and emotional, was lifted by their kindness.

On a side note, the mosquitoes have not been nearly so kind, and despite our precautions, Lily and Sonya may have contracted malaria. Praise the Lord, Lily is doing better now, and by God’s grace we trust Sonya will be soon.