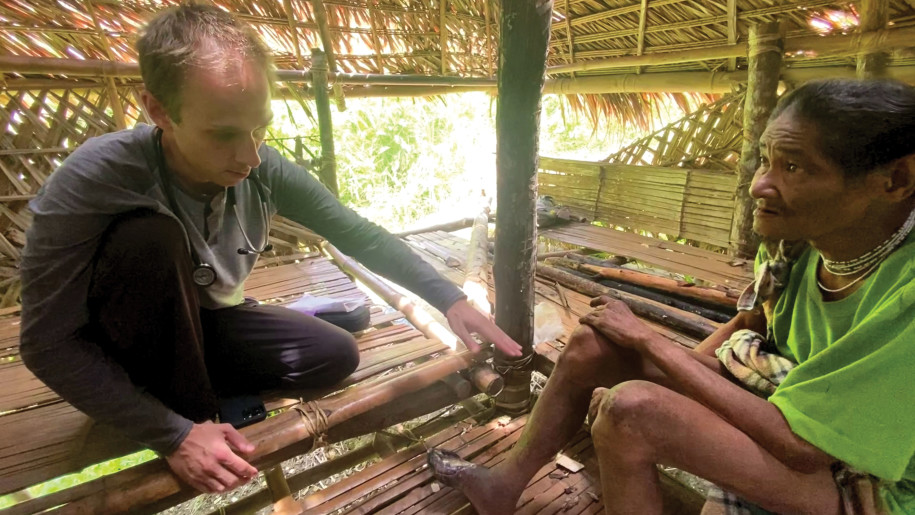 The smell of rotting flesh permeated the air as our patient took off the plastic bag that covered his diseased foot. As a nurse, I have seen many wounds and sores, but this was one of the worst.

His son, Kityun, had come to our mountain jungle clinic in Kamantian around 8:00 or 9:00 a.m. that Friday, asking, “Can you take the helicopter to get my dad and bring him to the clinic for medicine? His foot is not doing very well and he cannot walk.”

After asking more questions, we found out that his father, Malnasan, had been sick for about three months and that his toes and a finger were black, and some of the skin was gone. We then called our friend Daniel with PAMAS, who flew Kityun and me in his helicopter to his father’s house about two hours away.

Kityun climbed into the copilot’s seat to guide Daniel to the house while I jumped in the back. Off we flew above and beside rice fields and houses scattered over the steep mountains. Though I had seen the impressive sight before, I was still amazed how people can live on the sides of steep mountains like that.
By God’s grace, Daniel soon skillfully landed the helicopter on a narrow clearing of land that they had prepared for him in a rice field. “Wow,” I said to Daniel as we followed Kityun to the house where his father was, “there is no way I could have walked here in two hours.”

House calls can be interesting experiences. Sometimes the story is quite exaggerated. Other times, the reality is as bad or worse than the story told. We found the latter case to be true in this instance. Kityun’s father needed an amputation. When I tried to explain this to Malnasan, he refused the procedure.
“How can I walk then?” he asked.

Finally, they agreed to come with us to the hospital in the lowlands. During the flight, I was hoping Malnasan would change his mind about the amputation. Then two children got in the helicopter with us. I told Kityun that we needed an adult to attend his father at the hospital, but he replied, “We have to work. Just take him to your clinic.” So off we flew with Malnasan to Kamantian.

When we arrived, we consulted with our other missionaries about what we could do to help Malnasan. It was decided that we should send pictures to, and talk with, Leonda George, who was, at that time, in the U.S. We praised the Lord that we had finally received internet at our clinic, making this possible. Finally, it was decided that Ralyson, one of our new missionary teachers, would take the flight with Daniel and accompany Malnasan to the hospital.

The two children who had flown over to Kamantian with Malnasan would have to walk home.

“Do you think we should give them something to eat before they go?” I asked another missionary as they started their journey up the mountain.

“Wait,” my fellow missionary cried out to them as I went to get them rice, sweet potatoes and saltine crackers.

“You can come back here to check on how Malnasan is doing,” I told them after handing them the food.

At the hospital, Malnasan still refused to have an amputation. So they prescribed antibiotics and other medication and released him to stay at our mountain view farm. The children have come back a couple of times to check on Malnasan and, while here, have asked if they could have some more crackers. Apparently, the crunchy morsels must have been a nice treat for them.

God can write a happy ending to this story. He raised Lazarus to life, and He can bring Malnasan’s dead foot, toes and finger to life, as well. Please pray that God will work in Malnasan’s life and, according to His will, use this incident as an opportunity to open the Gospel to this remote village.