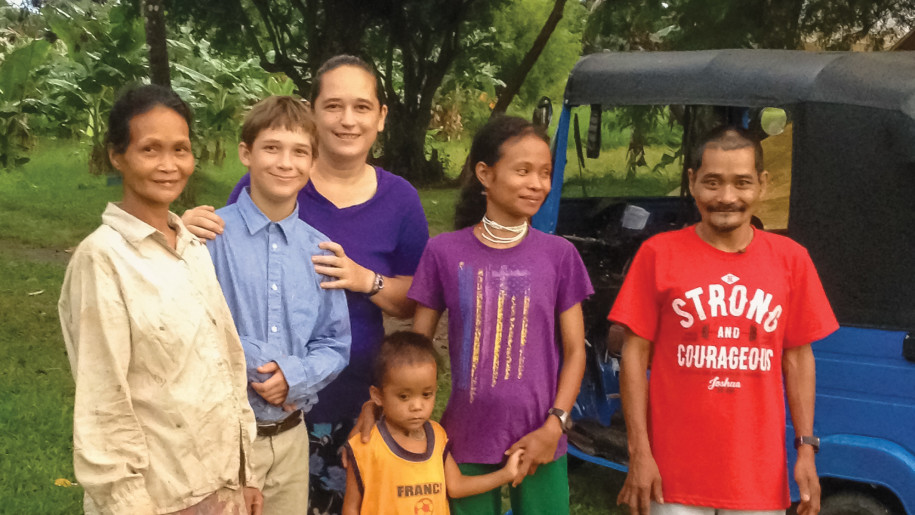 Narsing came to us the Sabbath before Christmas­—naked, dirty and badly wounded. Three days earlier, this little six-year-old boy had fallen from a tree and been impaled on a sharp stick. It pierced his abdomen on the left, passed through his ribcage just below his heart and exited the top of the ribcage on the right. I can imagine Narsing’s terrified mother running to get his father Medroni who carefully lifted him off the stick.

With his mom, dad and auntie, Narsing came to us from deep in the jungle, from the village of Kebgen, about a 16-hour hike away. We have not yet been able to travel to that village, but we have been praying for the people there since reading the accounts Leonda George wrote in Adventist Frontiers.

When the family arrived, Medroni was wearing a loin cloth. Not wanting him to feel self-conscious around the fully clothed people at the hospital, we gave him some shorts to wear. This seemed to be a new experience for him, because he put them on backwards.

At the hospital, the medical team X-rayed Narsing and administered antibiotics. He also got a much-needed bath while waiting for the surgeon, and I prayed with the family.

The surgeon arrived, and Narsing was anesthetized so his wounds could be assessed and cleaned. Afterwards, the surgeon told us that the stick had nicked Narsing’s intestines, but he had been able to sew up the damage. The doctor would continue the antibiotics and monitor Narsing closely. If Narsing developed a fever or increased abdominal pain, he would need a major abdominal surgery. It was evident that God had already worked a miracle. Amazingly, the stick had missed Narsing’s lungs, liver, stomach, heart and spleen!

The next day as we prayed again with the family, Medroni gave glory to God for how He had helped his son. On Christmas Eve, we enjoyed shopping for this precious family who had no shoes and little clothing. Day by day, God gave us opportunities to bring them food and pray for them. Every day, He continued to work His healing power in Narsing.

The next Sabbath we visited Narsing on the way to church. I shared with Medroni that it was God’s day, a day He set aside for us to rest and draw close to Him. What joy it brought to my heart as Medroni looked at his watch to see what day it was and then told his wife what he had just learned. Later that Sabbath, the doctor released Narsing from the hospital, and we were able to take him to the farm. The following Sabbath, Napthali, one of our Filipino missionaries, had returned from his Christmas break and was just finishing an unscheduled afternoon worship service when we arrived at the farm to visit them. Napthali said that Medroni had listened with great interest to the story of creation.

Thank you so much for your prayers. God is using them to work miracles! Thank you for your gifts that are helping to feed the hungry, clothe the naked and care for the sick in Palawan. Please join me in praying that Medroni would continue studying with Kalbu, our Palawano missionary, when he returns to his village and that together we will be a part of the great multitude in heaven that “have washed their robes and made them white in the blood of the Lamb” (Rev. 7:14).