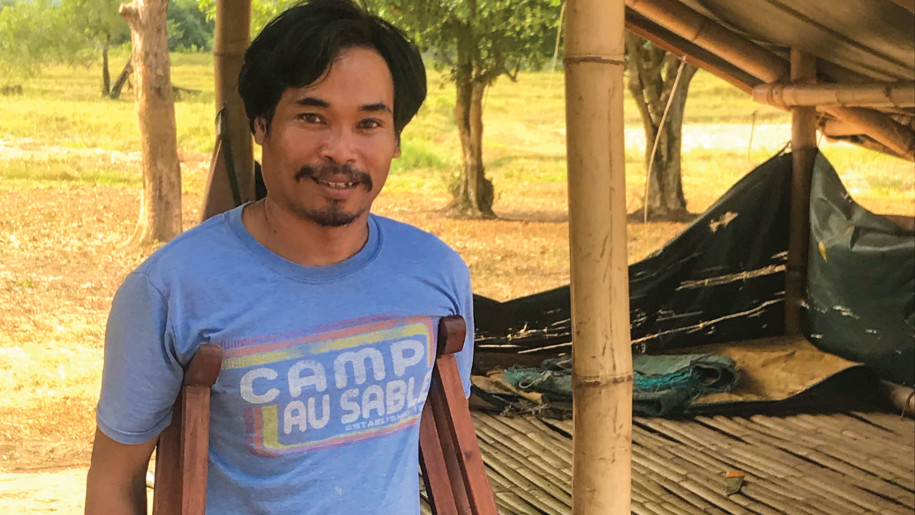 “Sit down, Buba. Seth, help!” My fellow Filipino missionary cried as, without any warning, Buba got out of his chair and flung himself over the second-floor railing at Robinson’s Mall, falling more than 20 feet to the ground below. He lay on his back screaming, “I’m dying! I’m dying!” as blood pooled under his head. I rushed to the closest escalator and ran down to him, shouting for someone to call an ambulance. The mall was nearly deserted due to COVID-19 lockdown. We were there to renew our visas, sitting outside the immigration office on chairs by the railing.

It seemed so long, but help finally arrived. Paramedics put Buba on a backboard and took him to their ambulance. Carrine rode with him in the ambulance, and I followed in the mission truck after calling to pray with Sonya.

Buba was baptized as a Seventh-day Adventist, and his family members are active in our church. However, he has not been walking with the Lord. His son Bambo became terribly sick and had to be taken to the capital city for dialysis. Weeks of poor sleep in the hospital with his son had taken a toll on Buba. We were planning to take him back to Brooke’s Point for rest while another missionary came to help his son Bambo and Buba’s wife Lali in the hospital.

Why had Buba jumped? “For we wrestle not against flesh and blood, but against principalities, against powers, against the rulers of the darkness of this world, against spiritual wickedness in high places” (Eph. 6:12). In Buba’s weakened state, evil spirits were tormenting his mind.

When I rejoined Buba at the hospital, his pain and mental distress were intense. I called Pastor George for prayer and counsel. He told me to pray with Buba, read the Bible, sing, and remember that the battle is not ours but God’s.

God blessed and protected Buba in his fall. He suffered a broken left foot, a burst fracture in his lower back, and a laceration on his forehead. But he could move all his extremities! We initially were told he would need surgery on his foot, and that he could be in the hospital for weeks until the necessary surgical instruments could be obtained. But just two days later, on a Thursday, he was released from the hospital—no surgery needed!

God worked not only a miracle of protection but a miracle of grace in Buba’s heart and mind. By Sabbath, the change was remarkable! We sang songs and read the Bible together. I was thrilled as Buba chose songs like “I have decided to follow Jesus,” “Jesus saves,” “Since Jesus came into my heart,” “What a friend we have in Jesus,” and “Everything’s all right in my Father’s house.”

Buba has since shared with me what was going on in his mind when he jumped. He was hearing lots of voices he recognized. He heard the voice of his wife screaming for help. He thought his wife and child were dead, and that he would be killed outside the mall.

Buba thanks God for sparing his life. He knew that he was not ready to die because he was living a sinful life. Now he wants to follow God. He is reading his Bible and praying for strength from God to resist Satan’s temptations. It is beautiful to hear him pray! He prays that his other family members will know Jesus. He prays for the missionaries working in remote jungle villages. He thanks God for sending the missionaries to teach him.

God used you, His church, to send the missionaries and bless Buba. I am thankful to God and to you for the opportunity to share His love here in Palawan. “I thank my God upon every remembrance of you, always in every prayer of mine for you all making request with joy, For your fellowship in the gospel from the first day until now; Being confident of this very thing, that he which hath begun a good work in you will perform it until the day of Jesus Christ” (Phil. 1:3-6).