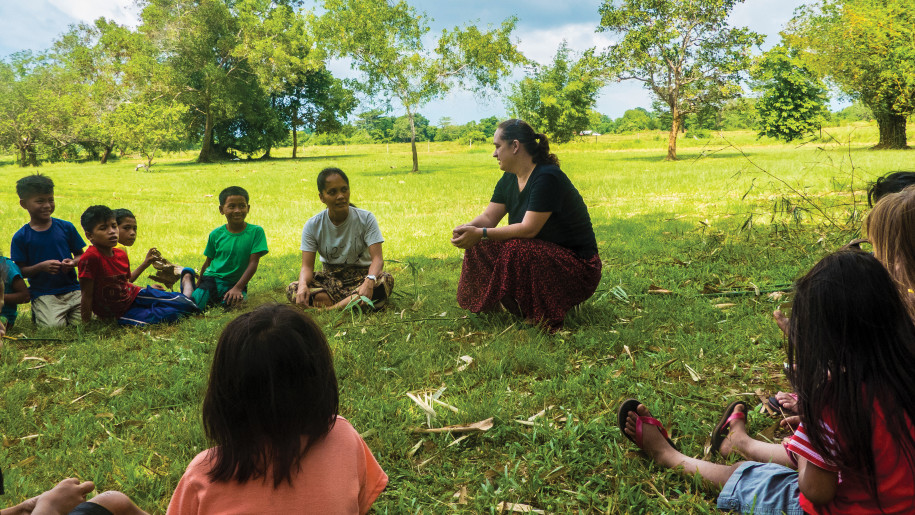 The long-anticipated day had arrived—the day when Luke and I could hike into the mountains to the Palawano village of Kemantian. I had heard of how steep the trail was, and I was not disappointed when I got to experience it firsthand! The hike was studded with gorgeous views, and three and a half hours later Luke and I caught our first glimpse of the Kemantian school and church. It was a blessing to be greeted by the children who were outside when we arrived. We got a tour of the schools, the clinic, and student and staff housing. Then it was time to make our lunch. We were hungry from the hike.

Our trip to Kemantian was a part of “boot camp,” a two-week training for the new student missionaries in which they get to experience living like the native Palawanos and immerse themselves in language and culture study. So we got to work making a fire. That first day, our lunch was finally ready in time for an early supper, but by the end of the two weeks we were pretty efficient at cooking over a fire. It was the preparation day, and all of the Kemantian-based missionaries got to welcome the Sabbath together. It was also day 1 of a special 10 days of prayer.

Sabbath services started at 8:30 a.m. with beautiful songs of praise to God in the Palawano language accompanied by guitar. Next was Sabbath School. I went with Luke to his class. For the worship service, one of the new teachers, who had only been there a couple of months, preached in Palawano. He needed a little help with some words, but seeing how rapidly he had progressed gave me encouragement in my language study.

The fellowship meal was unforgettable. I got to eat on a banana leaf for the first time. Banana leaves make great plates. They are free, water proof, disposable and biodegradable! There were about 30 people at the fellowship meal. No one served themselves. The food was placed on the banana leaves. Then, after the blessing, everyone got a leaf filled with food. There were three different kinds of rice, vegetables, noodles and boiled bananas.

Sabbath afternoon was special. I had watched an AFM video about the Palawano Project called “A Home in the Clouds” in America before we came, and I wanted to meet Mingoi whom I had seen in the video. Naphtali knew where he lived and said he would take us there to meet him. We prayed and began our hike to his house. He was not there, but many of his family members were there, including his elderly father-in-law. As Naphtali translated for me, I asked him to tell me a story. He told of his life, how he had grown up in the mountains, built a large house and held harvest feasts to thank the spirits and celebrate the harvest. He was elderly now, and breathed heavily while he squatted and talked with us. Then, to my surprise, he asked me to tell him a story. By God’s grace I was able to share with him some of what Jesus means to me.

Later, with joy in my heart, I slid down the muddy mountain trail to vespers. Thank you all for helping us carry the Good News about Jesus to the Palawano!