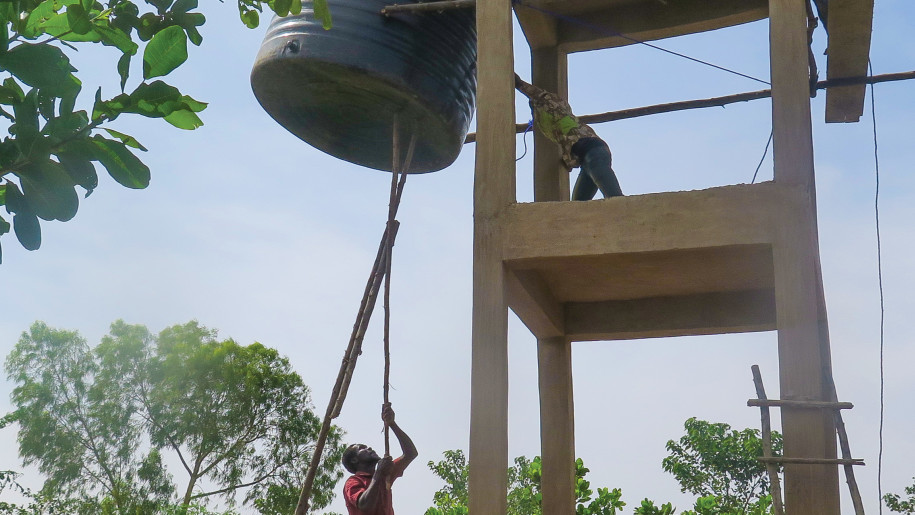 A whole lot of cement and rebar has been moving into our property recently as the agro-industry project gets underway. We first built a storage house for provisions and animal feed. We have been storing these things in our house, but a ton or more of corn takes up a lot of space.

This year, we also planted 2.2 acres of brown beans, and we harvested 1,320 lbs., all needing to be dried, beaten, winnowed and heat treated before storing in five-gallon jugs to keep the bugs out. During that process, someone had to stand guard over the beans to keep away the chickens and our disobedient goats so they wouldn’t steal mouthfuls and asphyxiate when the beans swell and block their airway.

When the storage house walls were completed, we poured the cement floor just two days before we harvested the corn and spread it out to dry. While the storage house was getting a roof, the masons started on the water tower. Back in July, we finally found someone who would drill us a deep well for a price we could afford. But it was only a hole in the ground with a pipe. We then had to wait for the rains to slow down so the masons could come and start building the tower. Because we don’t have regular electricity, we can’t pump water directly to the house.

As the water tower got underway, we ran into an issue of where to get the wood for the framing. We finally decided instead that, instead of buying new boards, we would take the boards off the goat and sheep house since the rains were basically done.

I made several trips to town to drag back many long pieces of rebar. The cement guy got to know me personally. He fills my pickup with a ton of cement, carrying one bag at a time on his head as I quickly do some shopping at the nearby market.

As work on the water tower started, the mason wanted to see the cistern so he would know how big to make the tower. We went to the town 50 km away, bought a metal tank and loaded it into the back of the truck. Then I drove home very slowly. Anytime I got over 45 miles per hour, the cistern would started lifting off the truck bed even though it was tied down.

When the water tower was up and the mason returned to his home eight hours away for a break, the plumber came and started digging trenches for pipes around the house. We got the submersible pump for the well, and after a few minor adjustments we had water in the tanks. And then, oh, wonders of wonders, we had water in our house! Since coming to Benin many years ago, this is the first time I have had running water in my home. Now I can have a shower without constant mud from the bottoms of the jerry jugs.

We are now constructing walls for the cement fish ponds, and are making cement fence posts so we don’t have problems with rust, theft and termites.

We save some money by making our own chain-link fencing. First Fidel went to Burkina Faso and bought a ton of wire.Then fence guys came from Burkina and spent a week running the machine that knits the fencing. The fence is up now. We also got metal fence posts to put around the commercial garden area. We bought a generator for pumping water to the tanks. It can also be used to run a projector and other such equipment for evangelism. In the future, we are hoping to buy a solar pump so we can be off the grid.

We thank every one of you who have made our agro-industry project possible.