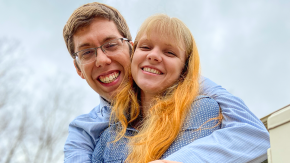 Michael was born and raised near Dayton, Ohio, then attended college at Southern Adventist University. Caitlyn grew up in Ooltewah, Tennessee and had wanted to serve God as a missionary ever since she was very young. They met at Southern and got to know one another at a Friday evening vespers group. Soon after getting engaged, Michael and Caitlyn served overseas: Michael with AFM in Cambodia, working as a teacher and web developer; and Caitlyn in Southeast Asia, teaching English as a Second Language class.

After returning to the United States in August 2019, Michael and Caitlyn got married. They moved to Berrien Springs, Michigan, where they have worked the last few years in various capacities, including recruiting for AFM. They both love working with young people and encouraging them to learn more about God’s character from the Bible and follow Him.

Together, Michael and Caitlyn are excited to follow God’s leading as they embark as career missionaries to Japan. They desire to show others how incredible and loving God is, and they thank each of you for your prayers and support.