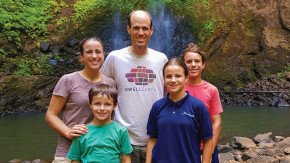 Career Missionaries since 2007, serving the Pnong people of Cambodia.

In 2002-2003, Cara served as a student missionary with Marc and Cathy Coleman on the Susu project while she was in college. After meeting and marrying Daniel, they and their son Andrew started serving as AFM missionaries in 2007 in Guinea, West Africa. After only 9 months, God opened the doors for them to serve in Cambodia on the Great River Project. They transitioned to the Great River project for the next year and four months. During their language learning time, Autumn was born. As they were preparing to move to the Great River Project, God redirected them up to the Pnong Project. They picked up where Braden and Johanna Pewitt left off. Shortly after this, Alex was born into the family.

By God’s leading and blessing, they have a thriving K-6 elementary school. There is a small group of baptized Pnong in a local village who meet each Sabbath. Most Sabbath afternoons they travel out to help share a Bible study with a Pnong family 40 minutes out of town. They look forward to how God will bless in the future. This is His work, His project, and He is the one growing and guiding the work in people’s hearts and lives.

Another amazing way that God blessed was in the fall of 2017, the Nicholaides and the Timmins families joined the project. Daniel and Cara had been working without teammates for 10 years. This change took place at exactly the right time as the project was ripe to open up and blossom.

Nobody in the village would go near the house for fear of the wrath of the spirits. Only our believers would go near and take them food.

I thank God for the opportunity to interact with our church members.

Now Cara was almost here, and there was no word on when Laurence would get released. I was doing my best, but I could not figure out why God was not answering our prayers.

Every Step of the Way

When our time at the hotel was over and we were checking out, we looked at the bill and were pleasantly surprised. The hotel had only charged us for Cara and my meals and hadn’t charged anything for the kids! We left feeling blessed, refreshed and ready to start working again! I want to say thank you to each one of you who were praying for us! God blessed and provided what we needed every step of the way.

My blade kept me from turning over, but I continued to slide down the hill and back over the gate bump. There was a road at the bottom of the driveway and across the street was one of the teacher’s houses. Would I hit someone or something?