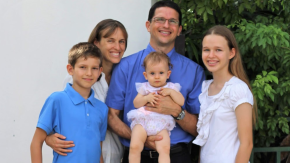 God had once again intentionally placed us in a neighborhood among people He has been wooing for years.

“Hey Robbie! That house looks empty, and it’s nice, too! It also has large trees around it! Our kids will love it!”

How to Survive Moving a Piano

Janella identified with me by sharing a funny story, which I will attempt to retell.

As I wrote in my last article, we have mixed emotions about leaving Surin.

Why don’t I cry much? Brain damage! Or so I’ve been told.