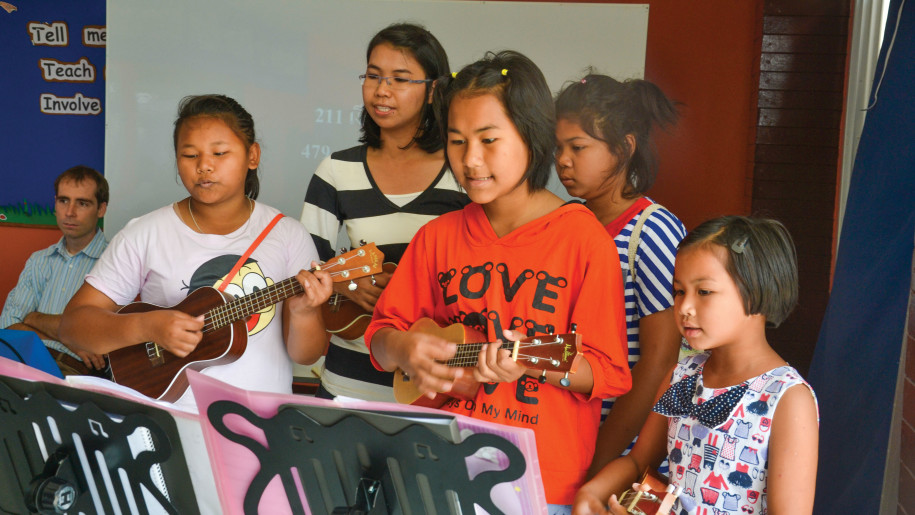 Some people think I’m a perfectionist. A few years ago, I would have denied it and claimed that I only want to do my best. The problem is, I tend to define “my best” with unrealistically high standards, which often causes me unnecessary disappointment and discouragement. This realization dawned upon me all at once, but I can say that God especially used the experiences of my student missionary year to teach me this lesson about myself.

It has been more than four years since I returned from serving as a violin teacher at Peace Music Academy in Khon Kaen, Thailand. While there are a thousand other things I miss about the place and the people, one that I definitely don’t miss is the frequent feeling of frustration about the language barrier when trying to explain a concept to a student. Many of my students didn’t understand any English, and since my Thai vocabulary was not much better, I often resorted to gestures to give feedback. Sometimes, to my delight, it worked! But most times I was met with blank stares and unimproved technique. I blamed myself for not doing my best in learning the language.

Another experience that stretched me beyond my comfort zone was song service during church on Sabbath. Given the 15 years I had spent practicing the violin, you would think that playing a few hymns and praise songs along with the singers and other instrumentalists would be a piece of cake, but I hadn’t done much playing by ear or improvisation before coming to Thailand. The only sheet music provided was a chord chart with lyrics, and yet I felt that ‘doing my best’ meant being able to come up with beautiful harmony parts on the spot. This was not something I was able to do most of the time. Sometimes it was even difficult for me to pick up and play the melody by ear, and I felt embarrassed when I would accidentally play dissonant notes. I honestly wanted to give up trying because it didn’t seem like it was ever going to get easier.

Now that I look back on these times of frustration and discouragement, I see how far I actually came in one year with both the Thai language and my ability to play by ear. The uncomfortable stretching of the moment resulted in long-term growth. By the end of the year, I was using a variety of simple Thai phrases and sentences in lessons with my students. And in the following years of university, I noticed that playing by ear and improvising harmonies with a song team was easier. I still don’t consider either of these skills a strength of mine, but I can’t deny how God worked through those difficulties to improve my effectiveness in ministry and to call me out of perfectionism to a better way of thinking.

He definitely is not finished with me yet. I am still tempted to listen to the voices that tell me, “Your best isn’t really your best” and “The standard you must reach is impossibly high.” But recently I’ve been reminded of Jesus’ parable of the talents in Matthew 25—especially the man who received one talent. His excuse for not improving his small gift was, “Master, I knew you to be a hard man, reaping where you did not sow, and gathering where you scattered no seed, so I was afraid, and I went and hid your talent in the ground” (v. 24-25). Just the other day it hit me: this guy was a perfectionist! A false picture of his master’s character led him to hide his talent away. He was afraid he wouldn’t be able to reach the unrealistically high standards of this ‘hard man,’ so he gave up.

Some of us relate to God this way. Yet we are told, “Our heavenly Father requires no more nor less than He has given us ability to do. He lays upon His servants no burdens that they are not able to bear. “He knoweth our frame; He remembereth that we are dust” (Psalm 103:14). All that He claims from us we through divine grace can render” (COL 362.5). As a perfectionist stretched beyond my comfort zone in Thailand, it wasn’t easy for me to believe this. But I have since realized that doing my best is possible, because the standard that I set as ‘my best’ doesn’t need to exceed God’s standard for me. He is not a ‘hard man’ or a harsh master, so why should I feel the need to play that role towards myself?

Now if you tell me I’m a perfectionist, I won’t deny it because I know my tendency. But I’ll also tell you how I’m learning to do my best according to God’s standards for me instead of my own. And if you ever happen to go out as missionary, you just might learn that you can do your best because His grace is sufficient!

Those whose houses where demolished were relocated, but they were not pleased to let go of their ancestral land.

From Crumbs to Loaves

So why did the Bread of Life seem stale to me? I had been storing it too long, saving it up for doomsday! Bread is made to be shared, not stockpiled.

The Heart Language of the Great River People

Azim has not only been an incredible friend and tutor, he has been God’s instrument to fling the door wide open into the heart language of the Great River People.