June 1940. 340,000 retreating soldiers of the British army and her allies had just been evacuated from the coast of France in the “Miracle of Dunkirk.” It was a bleak moment. One nation stood alone against the might of Nazi Germany. The peoples of occupied Europe collectively held their breath. Would the British resist the expected Nazi blitz, or would they negotiate a shameful peace with Hitler? The world listened as Winston Churchill rose to speak in Parliament on June 4, a speech that ranks as one of the finest ever made in the English language.

The speech’s impact was immediate. Fainting hearts were encouraged. Resistance against the Nazis stiffened across occupied Europe. The British Empire girded her loins for the Battle of Britain, when a handful of Spitfire and Hurricane fighter pilots fought off the onslaught of the German Luftwaffe. At the end of the Battle of Britain in autumn 1940, reflecting on what those few fighter pilots had been able to achieve, Churchill spoke movingly of them, “Never was so much owed by so many to so few.”

Forced to abandon his ambitions to occupy Britain, Hitler pivoted to an assault on the Soviet Union, which ultimately led to his death and the demise of the Third Reich.

Churchill’s last words stand out in my mind, saying that the fight against manifest evil would continue, “until, in God’s good time, the New World, with all its power and might, steps forth to the rescue and the liberation of the old.”

And as we look forward into 2019, we might apply Churchill’s words to another controversy that is raging all around us. We are locked into a mortal struggle against the Prince of Darkness and his minions, representatives, ideologies and false faiths. The persecution of God’s saints is on the rise. Christians around the world today face unjust imprisonment, physical assault, economic sanctions, social rejection, mob attacks, public mockery, murder and the abduction of their daughters.

If we were to paraphrase Churchill in such a time as this, we might say something like, “We shall go on to the end. We shall defend our faith and the blessed hope, whatever the cost may be. We shall fight on the airwaves, we shall fight on the Internet, we shall fight in spiritual warfare and deliverance ministry, we shall fight in personal ministry and faithful witness, in Bible studies, from the pulpit and in deeds of sacrificial love, public and hidden. Yes, we shall fight among the unreached and in our own post-Christian societies; we shall never surrender, our faith will never wax cold. And if, which I do not for a moment believe, our home churches were to be oppressed or closed down, then our worldwide body, beyond the seas, armed with the Sword of the Spirit and guarded by the angels of God, would carry on the struggle, until, in God’s good time, on that blessed morning, the New World, with all its heavenly power and glorious might, steps forth to the rescue and the liberation of the old.”

Today, be of good courage. One day it will be said of all those who dared to stand and to be counted, who sallied forth to the fight against seemingly overwhelming odds, whom Shakespeare might call the “merry few,” this “band of brothers and sisters,” that “Never was so much owed by so many to so few.” So wherever you are today, fight the good fight. Finish the race. Keep the faith. And on that glorious day, when the “New World, with all its heavenly power and glorious might, steps forth to the rescue and the liberation of the old,” each of us will receive a crown of righteousness from our Lord. 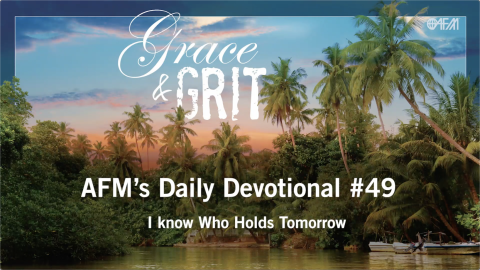 Hi, my name is Marcus Donesky and I am a student missionary who graduated with a degree in nursing and am planning on serving the Filipino people on the remote island of Palawan and am asking if you would partner with me through finances or prayer to help support this mission project.

We invite you to invest in the futures of the children and families we serve here in Thailand by making a pledge of support to our ministry to reach the unreached Isan people of northeast Thailand.

Some are impressed by the power of Jesus, but others like Azim follow the Holy Spirit’s promptings into a deeper and more profound understanding of God’s love.