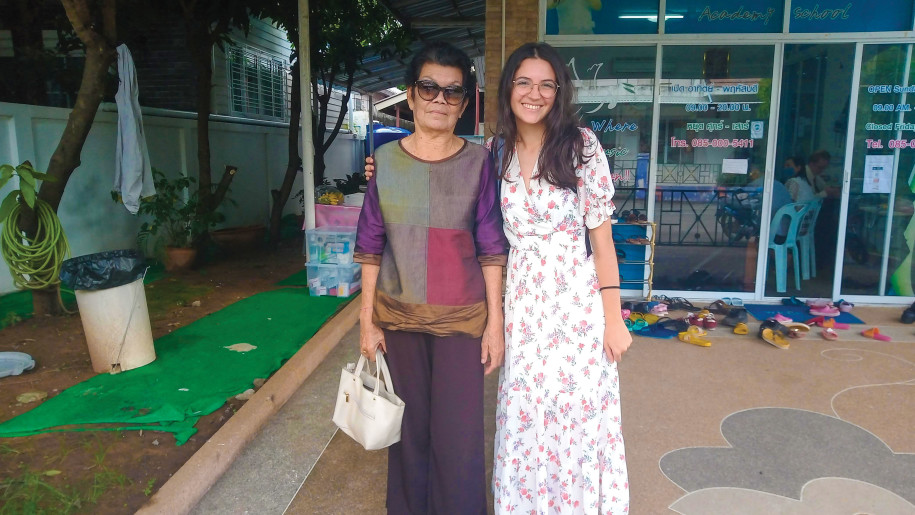 God often uses unexpected ways to teach people about Him, and this was certainly my experience with Nuu.

I had been a student missionary in Thailand for four months when I began to feel dissatisfied. I was doing my best in my duties, but I could feel that God wanted me to do more. After praying and asking God what to do, an idea came to my mind: start exercising at 6 a.m.! I had never liked to wake up early, especially to exercise, but I acted on this prompting. My first idea was to ride my bicycle, but then I felt that I should go walking. So I started to walk the streets of my neighborhood, asking God to guide me.

While I was walking one morning, an elderly lady rode by on a bicycle. “Sa wat dee ka,” I called out, and she returned the greeting. A little while later on another street, our paths crossed again, and we greeted each other a second time. Still later, I saw her a third time as she pulled up to her house. Sensing God’s leading, I walked over and tried to strike up a conversation. She spoke no English, and my Thai was very basic. But by God’s grace, we were able to communicate. It turned out that she was also a 6 a.m. exerciser, so we agreed to exercise together.

That was how my friendship with Nuu started. For the next three weeks, every morning we would ride our bicycles together, sharing a little conversation as we circled the neighborhood. One morning after our ride, she invited me into her home to continue our visit. It was very meaningful to me to see her opening to me. I began visiting her home every week to drink tea and talk. I was happy, but still I wanted more. How could I show Jesus to her? I started to pray for an opportunity.

One day when I went to visit Nuu, I learned that she had been hospitalized. I started praying for her. When she recovered and returned home, I told her about my prayers. Her eyes shone. This led to an opportunity to invite her to church. Before I left Thailand, Nuu attended our church several times and became friends with several of the members. Frequently she commented about how blessed she felt there and how she wanted us to pray for her.

God can use us in unexpected ways. We don’t need to have special talents to reach out. We just need to have listening ears and be willing to follow His guiding hand.