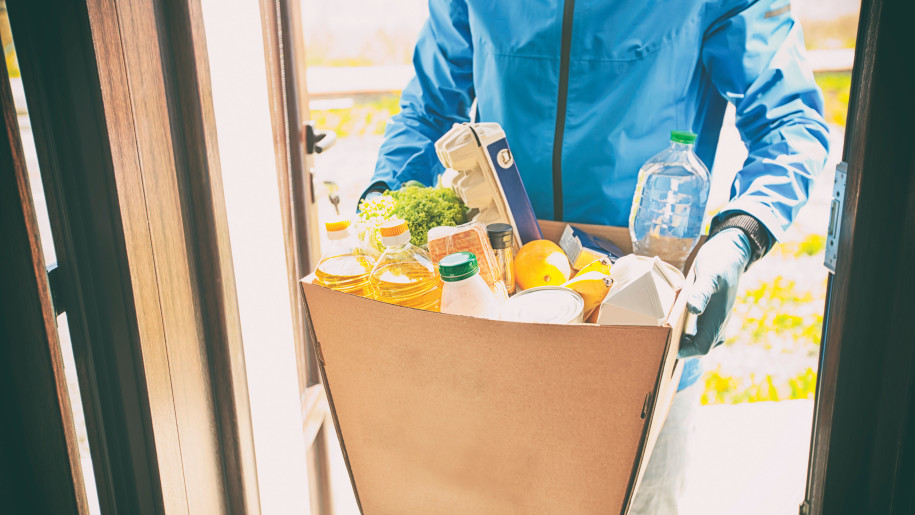 Dani was made for this. He was a natural fit for the director role of our community services kindness club—it’s just how he does life. Though he does not have much material wealth, he is rich because he always has something to give. Whether food, clothing, time to help, a kind word, or just a listening ear, Dani always has enough to share with those in need.

The pandemic-related economic hardships have hit families in this city hard. Dani has been identifying families who have not had sufficient support to meet their basic needs, and finding ways to help them. He has also been encouraging others to join the kindness club. In many families, the most urgent need is food. Such was the case with a man named Lenci, his wife Mira and their 10-year-old son, Aldi.

Dani heard that Lenci’s family was suffering. The neighborhood grocery shop owner had compassionately given them food on a running tab. Both Lenci and Mira were jobless with no hope for work in sight.

Just before the pandemic hit, Mira had lost her job as a public school teacher because she belonged to the political party that lost in the local elections, a common occurrence here. Lenci was laid off his job because the company folded during the pandemic. The situation was dire.

Dani used community service funds to buy several bags of food staples, plus a few extras for little Aldi. Next, he went to the local shop to pay off his bill. The kindness club’s activity so touched the shop owner that he decided to join, and he would not let Dani pay him.

When Dani brought the groceries to the family’s door, they were stunned. They invited Dani inside. While Mira unloaded the bags, she concealed her emotions. Suddenly overwhelmed, Mira sat down while the tears flowed. She told Dani that she could not believe this was happening. His timing was perfect, she said, because she had reached her breaking point. Mira asked why he was doing this, and Dani explained that he was a member of the community service kindness club and that God gave him the desire to help people. He said nothing made him happier. He invited them to join the club. Even if they had no money right now, they could still show kindness with their time or smiles. They loved the idea.

The next day, Dani stopped by to say hello and see if they needed anything. Talking with Mira and Lenci, he learned more of their story. The financial stress had been contributing to marital discord. Mira confessed that the day Dani brought the food, she had thought through plans to leave Lenci the next day and take Aldi and move back in with her parents in a nearby village. But she decided to put off those plans because it seemed like a miracle was happening. She explained to Dani that Lenci had been yelling at her a lot lately, and she could not take it anymore. Lenci hung his head and said they were arguing about the lack of money and jobs.

Dani took Lenci aside and spoke to him about how a husband is to serve and love his family and not take his frustrations out on them. Dani gradually opened up about how he followed the teachings of Jesus now and how what he learned through reading and praying changed his heart and life.

Lenci had not considered himself religious, although he is of the same non-Christian religious heritage as Dani. He was intrigued by what Dani said and wanted to know more. He, too, felt as though something unusual was going on, not only in this situation but in world events. Dani asked if Lenci and his family would like to read for themselves one of the stories that had changed his life. Mira had overheard everything Dani had said to Lenci in their tiny home. She moved closer, looked at Lenci, and said, “Maybe this is a sign!” Even the non-religious folks here often believe in signs and omens.

Lenci and Mira agreed, and they set an appointment to meet in a couple of days. Mira was worried that their home was not fit for proper hospitality. But Dani relieved her anxiety by telling her that hospitality is about having a welcoming heart, not a fancy house. A king in a palace is not a good host if he does not have a welcoming heart. That is what counts.

Our group members have learned how to have Bible readings and study with non-believers, and they have a list of passages to read with their small groups each week to grasp the big picture gospel theme from creation to the cross. However, Dani felt like he needed to share something else this time. He wanted to share a story from the Bible that the Holy Spirit would use to draw Lenci and Mira’s hearts heavenward. But it is important to us that people are not manipulated in any way but instead are drawn by the Holy Spirit. Because Lenci and Mira had not agreed to weekly meetings, Dani did not want them to feel obligated because of the food gifts.

When he left Lenci and Mira’s home, Dani called us and asked our group to pray that the right passage would come to mind. He asked us for more Bibles, but there was only one Bible left when Sean checked. On the day of the appointment, a passage was chosen that was not on the list of suggested Scriptures for unbelievers. We printed copies of the passage so that everyone in the family could read for themselves. It was the story of Elijah during the great drought and the poor widow of Zarephath who was down to the very last of her flour and oil when he visited her home. The widow expected herself and her son to starve to death very soon. Elijah asked her to trust God to provide for her little family and to prepare him a little bread. She did as he instructed, and afterward, her oil and flour containers were never empty throughout the drought.

It became clear to Dani that the Holy Spirit was working on Lenci’s and Mira’s hearts. They were so encouraged by the Bible passage and even asked Dani to share more Scripture stories with them. Dani agreed to return in a week and asked Lenci to invite anyone he could think of so the stories could bless others.

Dani’s wife Drita had not joined him for the studies because she had not yet been invited. So she decided to invite the family and whoever else joined them to her family’s home for weekly Bible readings and discussion.

Dani and Drita are praising God that the kindness club has not only been able to help many in need but has also opened many conversations about God. Some are beginning to bear gospel fruit. God has blessed in other ways as well. Through Dani’s wide network of friends and acquaintances, he found a possible job opening for Lenci, who is incredibly grateful for the opportunity.

We invite you to join us in praying for Lenci, Mira, Aldi, Dani and Drita. We are hoping the grocery shop owner and his family will join the small Bible study group at Lenci’s invitation. Because the cost of Bibles from our usual supplier has risen dramatically, please pray that God will meet the needs in that regard as well. May the kindness club continue to grow under the influence of the Holy Spirit, and may a thriving movement reach countless Albanians with the good news.