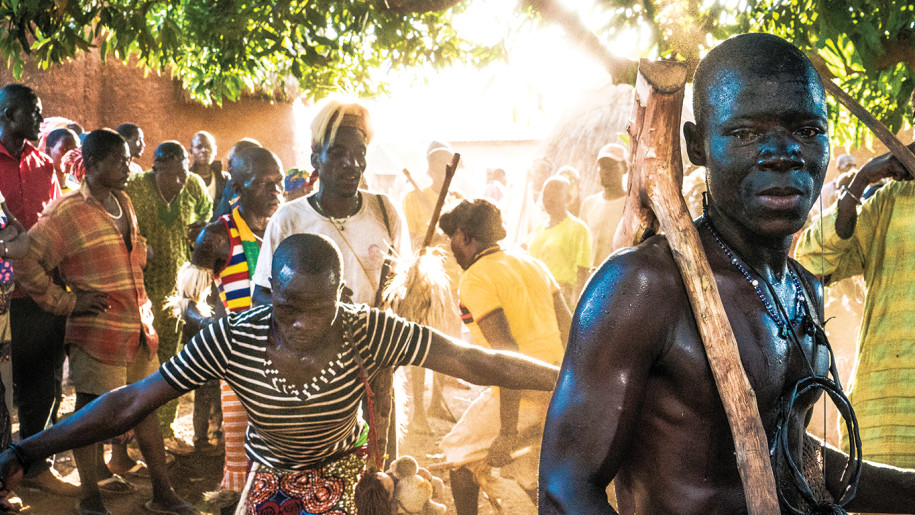 How could intelligent people turn to idolatry? Idolatry begins when people reject what they know about God. Instead of looking to Him as the creator and sustainer of life, they see themselves as the center of the universe. They soon invent gods that are convenient projections of their own selfish plans and decrees. According to Philip Parshall in his book Muslim Evangelism, 70 percent of all Islamic people are folk Muslims, which is true for the Malinke people as well. Noumory Sinaba is a blacksmith by profession. He came from Bancoumana, the territory of the Malinke in Mali. The Malinke are spread throughout West Africa, and among them the practice of animism is widespread. For generations, Noumory’s family has practiced animism.

One such practice is the choice of a new high priest for the family or clan. In this case, however, choosing a successor is beyond their control; the spirits replace the high priest with another member of the family, and no one has the power to resist their choice. Otherwise, harsh punishment will bring total ruin, an excruciating calamity or even death. This is often done through dreams or other revelations. Noumory had a dream. In his dream, he saw the fetish coming towards him, meaning he might be the next priest. But to his surprise, he saw a man dressed in a white robe. The man in white was surrounded by fire and sitting on a mat near where Noumory was lying. It was this kindly man who blocked the fetish from approaching him.

“I have never before seen this gentleman in my dreams, so who is he?” Noumory asked. “I practice this religion like all the other boys in the family. But it is against my will. Since we all grew up in it, we profit from it. Abandoning it means you will never relate well to family members. Sometimes others attack you with bad spells.”

In fact, this happened to him when he decided to get rid of his first fetish, the god of punishment, part of an unholy trinity found in Noumory’s animistic worship. Someone had cast a spell on Noumory, but an old witchdoctor cured him. The old man told Noumory, “That person cast a spell on you because you tried to withdraw from the fetish.”

“We are initiated into this belief system to prosper, protect ourselves and hurt others,” said Noumory. From then on, he returned to his old religion.

Personally, I have an older brother who at one point became rich with this practice. But in reality, he was stealing from people. His fetish gave him mystical powers, allowing him to steal from people without them being able to react or even say a word afterward. This fetish is used by the Arabic teachers.

The donzons are local hunters who use black magic for hunting, and their fetish spirit protects them. This spirit, a dangerous god, is suspended in the house of those who believe in it, and reveals every secret to the donzon. Any woman who marries outside the family must offer sacrifice to this fetish, otherwise the children she bears will be struck by misfortunes throughout their existence.

The soma (fishermen) worship the third fetish of this unholy trinity. When they want to kill someone, they will offer a sacrifice to their fetish. After three days the victim will begin to feel pain all over his or her body and die. Furthermore, this fetish kills anyone who comes to seek its help if they fail to keep their promise after a favorable response to their request.

“I worry very much,” says Noumory. “I have never liked this game. I know very well that salvation is not in this practice. These fetishes or gods are monsters. They are evil, seductive and destructive. What can I do? I feel helpless in the face of this great threat. The high priest knows everything and has power over everyone around him.” Noumory’s father once rebelled against the idols in their family and was reduced to being a pauper. He is now dependent on the high priest who happens to be his younger brother. The high priest is the one making decisions for the family and greatly influences the community. Fetishes ensure that no one can challenge them even when they are wrong. The astonishing thing is that the fetish priest collaborates with the Qur’anic teachers, who call themselves men of God. This idolatrous practice is manifested in almost all families even though they call themselves Muslims.

Noumory is looking for a savior who will deliver him. He wants to practice the true religion and get out of the animist religion, but he is afraid to resist the high priest. His biggest question is what will happen to him if he gives up his fetish practices. Please pray for Noumory and his entire family.

Some people wonder why we need missionaries if people can know about God through nature? Well, we need missionaries to persuade people through loving words and caring actions. Although people may believe there is a God, they refuse to commit themselves. Missionaries need to tell them of the dangerous consequences of their actions. Above all, missionaries help the church to obey the great commission. Please pray for the Malinke team, that through us God will draw many animists to himself. Thank you.