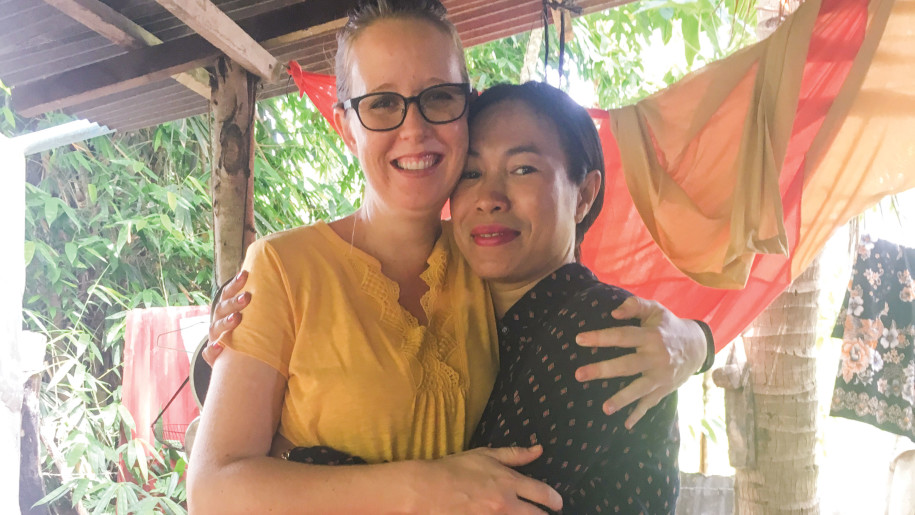 The Holy Spirit is moving in Cambodia! A Chinese lady in her mid-thirties named Hoining has asked to study for baptism. Our mechanic, Sry, who has come to church off and on for years since I brought his mother to a Christian clinic in Phnom Penh, told us he and his wife have decided to become Christians. Then he asked if his wife and kids could come live with us so they could learn about God. God healed Sry’s wife from a severe case of kidney stones through lemon juice, apple-cider vinegar and extra-virgin olive oil. There are many more Bible-study interests popping up as well.

We recently hired Gawtiet, the third-ever Great-River person to be baptized, as a full-time Bible worker. We are training him to help meet the growing need. Gawtiet, his wife Saviah and their four-month-old daughter Sara have just returned from two years of work on the New Testament with Wycliffe Bible Translators. He stayed faithful to his beliefs despite a lot of pressure to join his boss’s church and become a Sunday School teacher.

Our friend and church member, Tiery, has a 17-year-old daughter, Tearain, who has run away several times to be with her boyfriend. Two days ago she came home, and her grandfather was so angry that he locked her up with chains for two days. Eric, Ryan and I went to try to encourage a Christian spirit of forgiveness. We shared from our hearts with them and told the story of the Father’s forgiveness for the prodigal son. It ended with prayer, family hugs and expressions of forgiveness from all.

Please pray for this family of four generations living together in one house. The 84-year-old great-grandmother lives upstairs with Grandma and Grandpa, and Tiery lives under the house with her three girls. Her husband had an accident and can’t walk or talk. He is now living with his mother. It is not a good living situation for three girls since Grandpa gets drunk almost every night and often has friends over for drinking and loud music. Tiery has a hard time practicing her Christian faith without a home of her own. Her father used to beat her for disobeying, and she has never been able to stand up to him. Tiery dropped out of school to work and can’t read. But we hired a tutor for her, and she is learning to read the Bible.

The Tirados are spearheading a project to build a home for Tiery. We still need to make stairs up to the house, add a kitchen and a bathroom and connect to city water. We will be working on that in the next few weeks.

The neighbors we bought our property from are moving away, and we are buying their cashew barn and will convert it to a church. They recently gave their hearts to Christ, and now they want to sell their land to get out of debt so they can have more peace and time to learn about God. We don’t want them to leave! Stephanie had a good cry over that. God has a plan, though. It may be that God is calling them away to share with others what He has done for them. And He has done a lot. The mom, Sreyneang, who is the primary breadwinner, just spent nine months in the hospital with their son, Manan, while he was treated for leukemia. He wasn’t given a high chance of surviving, but now he is perfectly healthy. Sreyneang has been transformed. She used to be filled with anger, cursing and yelling, but now she is filled with the fruits of the Spirit. Her husband Vanna is hearing the Holy Spirit speak to him and following His voice. They were on the verge of divorce two months ago, but now they are praying to God as a family and thanking Him that they are all together and changing for the better. God saved Vanna and me from running over anyone when our dump-truck brakes went out on a hill. God also helped Vanna give up drugs and smoking. Angels have woken Sreyneang up twice—once from a nap in time for church and once in the middle of the night in the hospital when their boy Manan needed help but was too weak to call out. The family has experienced a number of divine dreams and miracles.

When the bank was about to foreclose on their house we offered to buy it because it would make a great church. Time is short, and having a ready-made church that doesn’t involve a lengthy building project would be a Godsend. “The neighbors say they wonder if I became a Christian since I go to church with you every week, I tell them, ‘There is nothing to wonder about. I believe in God fully.”

We spend most evenings doing in-home studies or group studies on video calls. Tonight we were at Sryneang’s and Vanna’s house reading the Bible and praying with their family. We have been reading through Matthew, and God’s word is coming alive to them. Their questions about new spiritual phrases they encounter, such as John the Baptist’s “Bear fruits worthy of repentance,” explode into spontaneous topical studies. They have found the word to be personal and alive. Sreyneang said she used to hate her husband and curse him in frustration, but now she forgives. Vanna said, “I’ve been mean as a tiger, but now the Holy Spirit is with me.”

They came to Christ out of Islam after having very few doctrinal discussions, drawn by love from us and from a Christian doctor at the hospital. We were with them in their pain when their Muslim neighbors did nothing. I spent hours on the phone with Sryneang over the months she was in the hospital, pleading with her not to divorce Vanna, telling her the sad story of my own parents’ divorce. Sreyneang says over and over, “God Jesus Christ is the one and only Lord over everything in my life. The neighbors say they wonder if I became a Christian since I go to church with you every week, I tell them, ‘There is nothing to wonder about. I believe in God fully.’”

Their plan is to move to Phnom Khiew, a town near the clinic we built that our nurse friend Soty is running. Sreyneang’s mom is from there, and she is giving them a small piece of land on a busy corner where they can open a store and will likely do well. Sreyneang is already planning to meet with Soty for worship on Sabbaths and to start a church there. She said, “I know a lot of people there. I will tell them they should believe God, too, and I think many of them will. I can’t make any promises, but I believe God will help me make a church.” I expect her church will be welcoming and have good food and a vibrant children’s program. Sreyneang is skilled and passionate in all these areas. Please pray earnestly for this family! We continue to praise God for what He has done and is going to do through them.

We are praying for 15 families on a daily basis. We can’t mention each one here, but thank you for praying with us and supporting our ministry. Time is short. We are grateful to be partners together reaching souls.

In many ways, planned giving is similar to gardening. It starts with a vision of what could be.