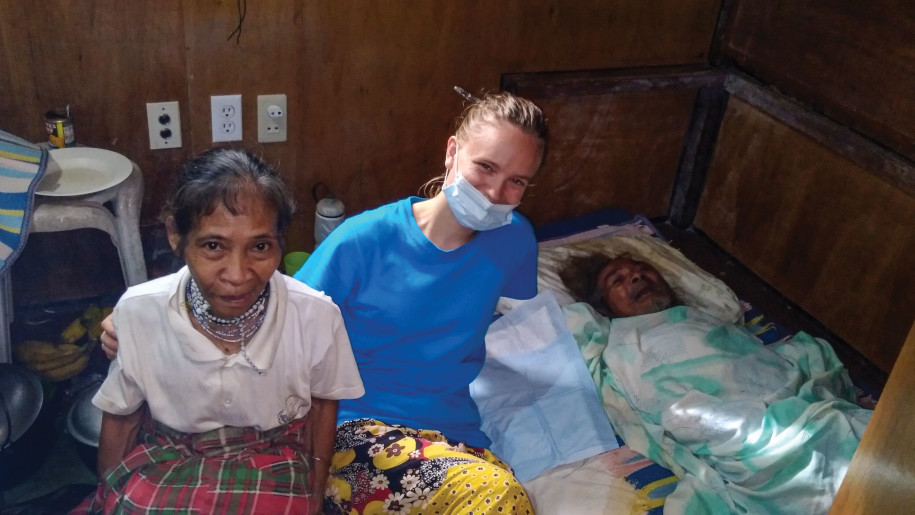 As I eyed the devil string around Lawangan’s waist, a bold idea shot into my head. I turned to the witch doctor’s wife and asked, “May I cut this off?”

Her eyes grew big, and her hand shot up to cover her mouth. She bent over her husband’s head. “May she take your string off?” She repeated my question.

“His breath might leave if you take that off,” she explained to me, eyes full of worry.

I looked tenderly down at the aged man.

“Grandfather, remember that Father God in heaven is stronger than the spirits. Your breath will not leave if I take it off.”

Even though Lawangan has been bed-bound for years, he still stands tall in the community of villagers the next mountain over. He is the mightiest witch doctor of their generation. His word is widely respected, and his curses come to pass. His dreams tell him things, and the spirits speak to him through animals. Villagers say that when he was younger, he could break a steel bar with his bare hands with the help of the spirits.

Now his words are mumbled through a toothless mouth, and anytime he moves, it is because somebody moved him.

This is the man that detested the arrival of the missionaries so much that when they came, he tore down his house, which overlooked Kemantian, and moved far up the mountain and over the ridge to extract his family from their influence. He is the man who people from Kemantian have heard stories and legends about, but most have never seen with their own eyes.

Providence and disease worked together to bring this mighty witch doctor to the clinic this June. His wife said that they first prayed and made offerings to the god of the tree which he supposedly offended, then to the god of sickness. Finally, at wit’s end, they sent somebody to the clinic.

Though we can barely understand each other between my American accent and his mumble, I’ve grown especially fond of this old man. As I finished taking vital signs one day, I sighed a big sigh and looked down at his wrinkled face.

“Do you know, Grandfather, that Father God is going to make the world new someday?”

He mumbled something that I didn’t understand.

“Yes,” I forged ahead anyway, “because Father God is very strong. He made everything in the beginning, and everything was very good. But a bad, bad spirit messed everything up, and now there is sickness and death. Now people are angry, mean and jealous. Now the animals are skinny and bite people.”

“Yes, yes, they bite,” he started nodding along.

“There are thorns and sharp rocks that cut our feet,” I continued.

“And sometimes it doesn’t rain, so the rice does not ripen well.”

“But when Father God will make the world new again, there will be no more sickness or death. Everyone will be happy, healthy and young. The animals will all be friends with each other, and the rice will always grow fat every year.”

“Yes, yes,” he mumbled and said a few other things, which I couldn’t make out.

I had no clue how much he was understanding or believing for that matter. Maybe he thinks I’m just a crazy white person telling nice stories. I continued anyway.

With those words, the ancient witch doctor cracked the biggest toothless smile I have ever seen and gave a frail but hearty chuckle.

We smiled together. He started talking and continued for some time, though I hardly understood a word. Instead, I tuned him out and began to pray.

“Lord, you know I cannot communicate with this man everything I want to say. But he has listened to and talked with the spirits for years. Surely he could listen to and understand You if You talk to him directly. My words are insufficient, Father. Please teach him yourself. All his life, he has served demons. He, of all people, must know how the spirits do not care for humans, how they do not love him. These last few days, I have told him of Your love in the best way I know. Please show Your love to him Yourself. Speak directly to his heart.”

He finished talking, and I finished praying. I smiled again, patted him on the shoulder, prayed to Father God with him, then left.

A few days later, I had rolled him onto his side to clean his back when God impressed me to ask to take his devil string off.

After asking twice and reminding him of the love and strength of Father God, he said yes. His wife watched nervously as I took scissors to the string that, to her belief, has protected him all these years.

Carrying it victoriously in my gloved hands, I came into the pharmacy.

“Can you guess what this is?” I asked Justina.

“No way. Is that his…?” she motioned to her waist.

“Yup! What is it called anyway?”

“Like, maybe a devil string, I think? Did you pray with him?” Justina asked.

Justina and I tromped back into the room and prayed with him, thanking God for His love and protection.

Please keep Lawangan and his village in your prayers. Nobody from that area has accepted Christ yet. There have been many stories of possessions and witchcraft from their area that would make one’s skin crawl. We have high hopes that our work with their chief witch doctor Lawangan will be an opening wedge to that dark place.