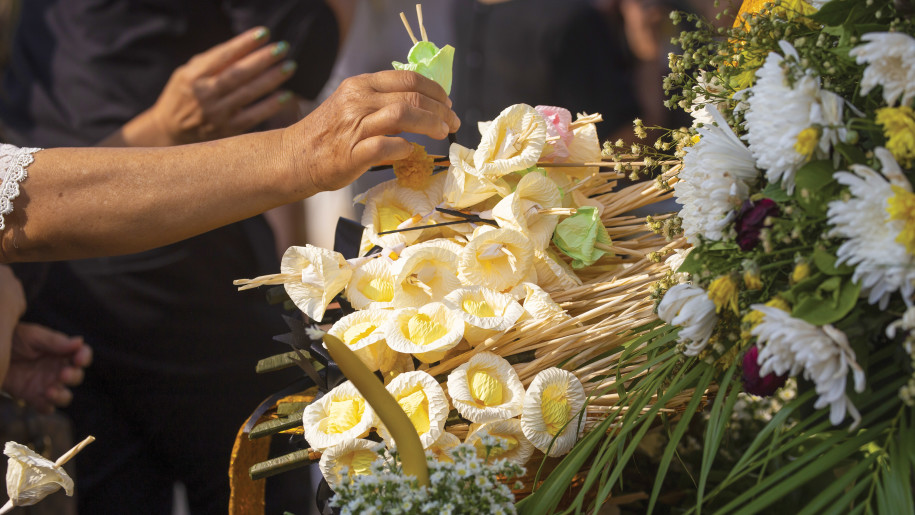 On a late afternoon this past April, one family was forever changed. The wind howled outside, the rain fell, and an interior side wall from the third floor of a popular Khon Kaen school came crashing to the ground.

Delayed by the weather, the father of a four-year-old student had arrived just minutes before to pick up his daughter as he did every day. The two of them walked hand in hand toward the front door of the school. But before they could make it there, the unspeakable tragedy occurred. The father escaped with only an injury to his arm, but, sadly, his daughter was killed in the freak accident.

I was in my office when I saw one of our church members post a message about the accident. I sat stunned, unable to focus on anything else. Although I had never met this family, my heart broke as I thought of what they must be going through as they processed the passing of their beautiful little daughter, so innocent and full of promise. The heaviness of my thoughts was almost too much to bear. I longed in my heart to do something, but what could I do? I thought about the teachers who had witnessed the accident. Several of them were Filipino members in our church. How were they handling the shock? What did this mean for the future of the school and for them?
Later that day, the city mayor declared that the school would be closed for 60 days while a safety investigation was performed. The school had been built only five years ago, but the Bangkok Post reported that, “Its approved construction plan was for the building to have solid walls, but parts of it were actually glass window panes.” Did the owners knowingly cut corners in order to save money or time? Bribes and dishonest practices are commonplace here. If the school could not reopen, our dear church members who work there would be forced to look for other employment.

Despite the busyness of the next few days, my thoughts often returned to the grieving father and mother and the unsettled state of the school’s future. My desire to do something to help the family continued to build, but I didn’t know what I could do other than pray for them.

When I learned about the funeral details, I made up my mind to attend the last ceremony. My friend, a teacher at the school, and his family accompanied me. It was a sweltering morning, and I inwardly dreaded the thought of having to sit outside for several hours at the temple. Thai funerals typically last several days and end with cremation at a local temple.

Taking our places under a shade tent, we began to chat with some of the other guests. The crowd was not very large, and there were still three hours before the cremation. My attention was drawn to three large framed pictures of the girl that were situated in front of the temple incinerator where her body would be reduced to ashes. Again, I felt my heart breaking. What would I be feeling if I were in her parents’ place, not knowing the comforting truths of the Holy Scriptures or having the hope of one day seeing her again?

After about half an hour of chatting and pondering, I had the opportunity to meet the bereaved parents. I prayed silently in my heart as I prepared to greet them. The father, who had been with the girl at the time of her death, smiled at me and thanked me for sacrificing my time to come. He shook my hand, while his other arm hung from his side in a cast. The mother’s face had a painfully stoic look. Although she was doing her best to be cordial, I sensed her grief. What was she thinking? What must she be feeling? My heart went out to her. I knew that if she let herself, her tears would gush as freely as the raindrops that fateful day earlier in the week. Thai people do not express deep emotion, even at funerals. They focus instead on making merit for their deceased loved one.

I went back to my seat, but the face of the broken-hearted mother was still etched in my mind. For the next hour and a half, I sat in the shade of the tent talking to some of my church members who worked at the school, expressing my condolences and letting them know that I had been praying for them.

Monks started to chant in the Pali language on behalf of the spirit of the dead child. Most of the rituals at Thai funerals focus on transferring merit to the deceased so that their spirit can leave this world and find a place in heaven. (See Ministering to Mourners p. 127, produced by the Center for East Asian Religions.) They want to make sure that the spirit of the deceased isn’t angered or offended since that could bring harm or misfortune to the surviving family members and relatives.

People queued up to bring incense to the coffin before the cremation, and then it was over. I watched as the crowd walked toward the exits. Lottery vendors stood at the end of the crowded lines quietly displaying their wares. The last chapter of this girl’s short life had just come to an end, and these people had the audacity to enter this solemn space and sell lottery tickets? Life moves on. My thoughts again turned to the parents. What would life be like for them now? Would they let themselves grieve the loss or be content knowing that they had fulfilled their spiritual duty to their deceased daughter? Would this tragedy awaken them to a spiritual crisis and open their hearts to the true God of heaven, or would it push them farther from Him and deeper into Buddhism? Only heaven knows. Please join me in praying for this wounded family.