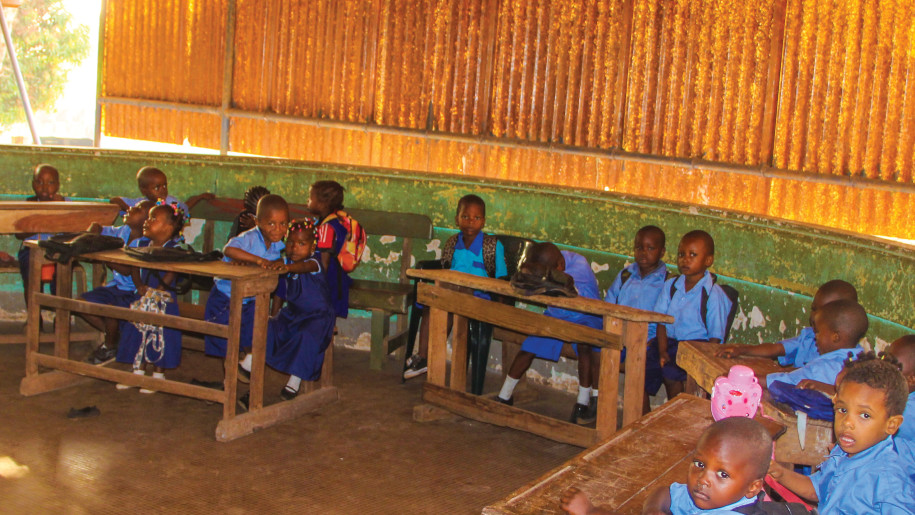 The AFM Susu Project began way back in 2000 when AFM missionaries Marc and Cathy Coleman and their two small girls arrived in Conakry, Guinea. They lived in Conakry for two years, acquainting themselves with the language and culture, befriending local people and church members and just trying to survive. Conakry was a hotbed of banditry and corruption, so they had to focus a lot of time on just getting through each day safely. It was a very difficult place to do ministry.

God impressed Marc that it was time to leave the hustle and bustle of the capital and establish a new home base for ministry in the town of Fria, with its population of about 100,000. The Colemans had already befriended Isatta and me in Conakry, and we asked to join their project as missionary interns. So, in 2002, we became local contract workers of the Susu Project in Fria.

Moving from the capital to Fria had its own set of challenges for our two families, but God was with us. We knew no one, and our first couple of months in Fria were lonely ones. Together, we decided that prayer would be the foundation of our ministry. Every morning and evening, we gathered our families together and pleaded for God to arrange divine appointments and lead us to key people in the community. Through God’s providence, we met a veterinarian doctor who would later become the first elder of the Fria SDA church. Thank God for small beginnings!

As God led us to more people in the community, a small group started to meet for worship. After meeting for a while in our homes, we rented a small building. Marc and I were very busy conducting Bible studies in the community while Cathy and Isatta worked to create health materials. Soon we had our first baptisms as God added souls to His kingdom.

As more people started attending the weekly Sabbath services, we began to wonder how long our Muslim landlord would put up with our Christian activities, so we decided to be proactive and build a church. We purchased land in 2004 and dug a well. The members and Bible students were happy to clear brush, gather rocks, make bricks and do whatever else they could. Passersby on the dusty road could hear us singing and laughing as we worked side-by-side. Neil Lovitt and Joshua Fallah were instrumental in getting our church built.

While the building was taking shape, the Susu team conducted stop-smoking clinics in the city and made weekly trips into three nearby villages to conduct medical work. Cathy led out in that along with Fred and Mary Qualls. Medical missionary work opened many villagers to us and brought healing and relief to hundreds of people.

As more young people joined our church, a new problem arose. In the French-influenced educational system of West Africa, school meets on Sabbath. This was a major problem for our young believers in Christ. Would they have to choose between God and education? Would they lose out on their future education by not attending classes or taking exams on Sabbath? We prayed hard for God to intervene and solve this dilemma. Amazingly, though, our young believers seemed relatively untroubled. Their minds were made up. They had already decided to obey God, come what may. Deeply impressed and inspired by their faithful stand, we worked feverishly to find a solution that would allow them to continue their educations.

In 2004, God impressed Marc to start a school. Though some of us thought it was impossible, he forged ahead. Our small school opened in the Colemans’ courtyard with six students. As the team continued to pray and seek God’s will though many obstacles, the student body grew. Over the course of several years, we rented larger and larger buildings to accommodate our growing student body. For a while, Angel Johnson was the principal and Dr. Andre and Mr. David were administrators. Together, they helped to organized and bring structure to our small school. Through much sweat and many tears, obstacles, threats and setbacks, the school continued to grow in enrollment and reputation in the community. Many parents longed to have their children in our school, but our space was too limited to accept most of them. Finally, we purchased land and built a new school. By 2010, we had 90 students.

In 2010, after much prayer and deliberation, the Colemans felt the need to return to the States, and they asked Isatta and me to take over direction of the AFM Susu Project. We accepted the challenge. Since that time, God has continued to bless this work in remarkable ways.

In 2011, we traveled to the States for AFM training and to raise funds for the Susu Project. We had a challenging speaking schedule, and we prayed that the Lord would control the Michigan winter weather so that we could make it to all our engagements. He answered our prayers, and we were able meet our fundraising goal. This was a great encouragement to us that God still had bigger plans for Susu of Guinea.

Two months after our return to Guinea, Satan showed his unhappiness with our progress by attacking our school through corrupt officials in the education office. First, they disqualified the school building we were renting. God thwarted the attack by leading us to a complete, up-do-date school campus, which we rented.
Then Satan attacked again, this time at the root of our very reason of being. We were told that our school would be closed if we continued teaching the Bible in our school, praying, and taking Sabbaths off. This attack put us into contact with higher government authorities, and we were able to make powerful friends who have protected us. With Jesus in charge, all things are possible! Our school is now the biggest and most prestigious private school in our community, enrolling more than 700 students—most of them from Muslim families. The school continues to be a powerful evangelist tool, changing the hearts and minds of young Muslim children and their families.
In the church, we continue to teach and urge our members to put into practice what they have learned. Each Sabbath, we fellowship with more than 60 adults and about 20 children.

During the last visit of the Mission Station director, he evaluated our progress and told us that the group can now be officially incorporated as an Adventist church. We are joyfully preparing for a dedication service.

We are very thankful for your support. Your gifts and prayers strengthen us as we follow God’s leading toward even bigger and better things in Guinea, West Africa.