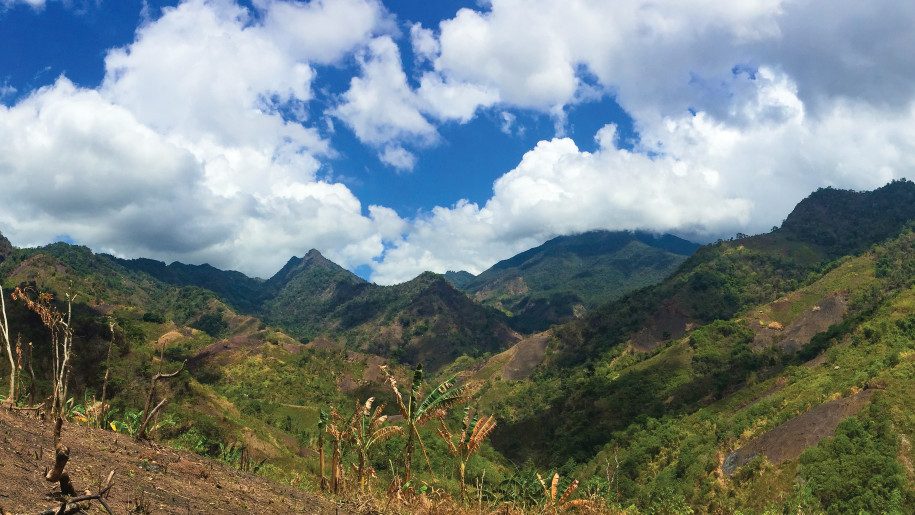 I was excited as our plane began its descent. The view of the ocean and surrounding Philippine islands was breathtaking. Kemantian, the place I have heard so much about, the place I have dreamed of seeing for months, would soon become my home for a year.

When I stepped off the plane in Palawan, a surge of heat blasted my face, reminding me that I was no longer in South Africa. After a five-hour bus ride, I met Kent George, a career missionary who has been ministering in Kemantian for 20 years. I also met his wife Leonda. Kent showed me around their lowland base, Mountain View Farm. He booked me into a hotel for the night and told me that tomorrow I would hike into Kemantian and stay for a few days. He also told me that the student missionaries would participate in a month-long boot camp where we would work on the farm and build our own shelter to live in. I have always been a person who over-prepares for everything, so when Kent told us to pack for a few days, I went a little overboard, packing plenty of clothes and also some emergency equipment. I also packed all my toiletries, which included my large towel and big bottle of shampoo and warm clothes (which, as it turns out, I have not used since I arrived). My pack felt a little heavy, but I thought it would be manageable.

The next morning, we had breakfast at the Georges’ house. We also met Naphtali, who would be our guide up the mountain. So Stefan, Naphtali and I hopped onto a motorbike with our backpacks and started the journey. Ten minutes in, I could feel my pack getting heavy, and I knew I had made a mistake. Everyone here wears flip flops even for hiking, so naturally I did the same. Because there was only one set of foot pegs on the motorbike, Stefan had to put his feet on top of mine. It took us about 30 minutes to reach the trailhead. By that time I was hurting all over and already exhausted from holding onto the motorbike and trying not to fall off.

We started our hike, and at first it wasn’t too bad. But then the trail got steeper. They say you never know how steep a mountain is until you rub noses with it. Well, it’s the truth! After we passed a small village, we reached the actual mountain. Just looking up at it drained my strength. It was about 10 in the morning, hot with no wind. We started the climb, and 10 minutes in, I had a headache and felt nauseous. My body seemed to be saying, “What are you doing? You’re not used to this, Louis.” As I stopped to rest, I noticed that Naphtali, who has been hiking up and down this mountain for years, was not even sweating yet. I took a headache tablet and some water and continued on. But just a few steps later, I had to rest again. I was sweating so much, I looked like I had just climbed out of the shower. I drank more water and continued on. Some parts of the mountain are so steep that if you stand up straight and put your hands out, you can touch the mountain in front of you.

We finally reached the top of the steep section and came to a section of trail along a small river shaded by the canopy of the jungle. It was such a relief to splash cool water on my face. I praised God for bringing me to this spot. The rest of the hike was just a steady climb, with one more steep section. We finally reached the top, and Naphtali picked some fruit and gave it to us. It was pretty bitter but still enjoyable.

Then we began our climb down into Kemantian. Going down is tough on the legs, and my knees were soon shaking. Finally, we made it. Kemantian! I praised God for getting me through the ordeal. Three American missionaries, Robbie, Ritchie and Mark, came out of one of the houses, and we chatted for a while. They told me where I could take a shower. That was the best shower I’ve ever had! The missionaries showed us around Kemantian for a bit. It is such a beautiful place.

The next day I went on a mission to find some locals and start learning the language. When Mark saw me leaving, he asked if he could come, and I agreed. We sat by a volleyball field where most of the locals hang out. Mark taught me a few words and phrases, which I practiced with the people. It was pretty tough at first and they kept laughing at me, which I was told is normal.

I woke up excited the next morning—my first Sabbath in Kemantian! Church started at 8:30. It was encouraging to see so many people and especially a lot of kids. I couldn’t understand the language, but it was fun just to be there.

A week of prayer was ending, so there was an agape feast after church. Everyone gathered at the high school, and food wrapped in leaves was placed in front of each of us. That was the first time I’ve eaten food served on a leaf. It was amazing. I looked around at the smiling faces of all the kids and my fellow missionaries, and I felt at home.

The next day we hiked back to Brookes Point and Mountain View Farm. It wasn’t too tough. At the farm we started constructing our shelter. All we had were pieces of bamboo and a tarp. While we were building our shelter, we slept on the floor of the main house. Throughout the building process, we helped around the farm, working to fix the lawnmowers and grass cutters.

We finished our shelter, and the first night was interesting. Just the day before, a massive spider had landed on Stefan’s shoulder. It had spun its web right in front of Stefan’s entrance. We realized that building the shelter between two trees probably hadn’t been a good idea. The trees are homes to thousands of insects. If it wasn’t for my mosquito net, I would not sleep in the shelter.

We spent the next couple of weeks working on a new building to get it ready for a group that was coming in to pour the cement floor.

Most of my work so far has been hard physical labor. I am not the biggest or strongest guy, and I really struggle sometimes. One day we needed to stack 50 kg sacks of rice. I asked God to give me strength to pick up those heavy bags, and He did! I still struggled, but I could feel His presence with me. I continued to pray through my work, whether I was digging holes or installing wiring, inviting Jesus’ presence. On our second hike back from Kemantian, I asked Jesus to hike with me. When Jesus was on earth, He walked everywhere with His disciples. And God enjoyed walking with Adam and Eve in the Garden of Eden, too. I imagined Jesus walking with me on that mountain, and it felt so special. In the mornings when I have my personal devotion, I ask Jesus to sit next to me and teach me like He taught His disciples. It is an amazing feeling to have His presence with me in everything I do, no matter how big or small the task. Jesus really has become my best Friend.

One day we received some terrible news. A young boy had been found who’d had tetanus for about 10 days. PAMAS (Philippine Adventist Mission Aviation Services) was called to airlift the boy from the mountain to the hospital, but Pastor Kent said that having tetanus for that long without treatment is usually a death sentence. Everyone prayed for the boy. A few days later, we got the news that the boy had survived! God truly performed a miracle. A few days later, I was overjoyed to see the boy back in Kemantian, smiling in the arms of his mother. On Sabbath afternoon I saw him and his family in church, and I thought to myself, that is what mission work is all about.

This experience and many others have made me realize that this is where I want to be. I believe God is calling me to serve another year in the mission field, and maybe even to make a career out of it.