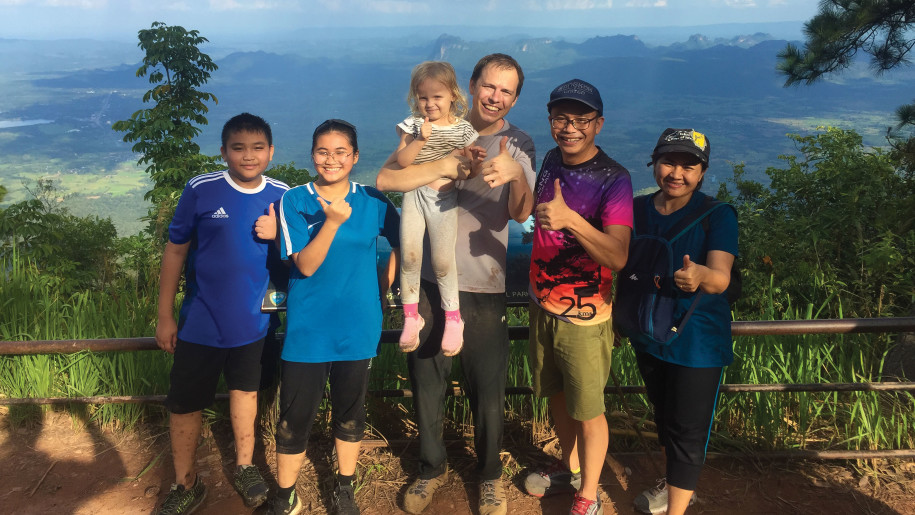 After weeks of anticipation and preparation, the morning had finally arrived. Bags were packed, and vehicles were loaded. There was no turning back. The courageous crew had been told that they were going to the mountain to suffer. This would be a test of endurance, teamwork and grit­—lessons to be taught through rugged terrain and challenging circumstances.

About two hours northwest of Khon Kaen stands Phu Kradueng, a 4,000-foot-tall mountain that is a popular destination for tourists and locals alike. Although the trail features rest areas, steps and ladders, and even local guides along the route, it is still a rather arduous journey with some very steep inclines.

I was excited to be able to accompany a group of about 30 Pathfinders and adults on this memory-making trek. I was especially looking forward to experiencing this adventure with my (almost) four-year-old daughter Ali. I knew I would likely have to carry her a good portion of the way, but I felt like the opportunity to have her along outweighed the challenges. I prayed that she would not get too homesick during the two days we would be gone.

After checking in, getting situated and offloading some of our luggage to get carried up the mountain (the national park provides this service for a charge), our group began the climb. It was a bright, sunny morning, and the temperature was hotter than we had anticipated. Sweat poured down our faces, and our progress was slow. I began to question whether we were sufficiently prepared. Most of our youth had never done anything like this before. But they pressed on, though I heard one of them saying he wished he were back home snacking and watching TV in his air-conditioned living room!

When we arrived at the first rest area, I was surprised to see all of the vendors. Water, pop, coffee, Gatorade, fruit, and even hot meals were for sale. Even if we had failed to bring adequate supplies, we would not have suffered. After a 20-minute break and downing two bottles of water and a Gatorade, I continued up the trail with about five others. The group had fragmented into bands to accommodate various speeds and fitness levels. This part of the trail was much flatter and was a welcome change of pace from the initial steepness. I was able to take in more of the scenery and marvel at the breathtaking beauty around me. Ali was able to walk more on her own, which provided me with a bit of physical reprieve. At one point, Ali asked, “Dad, am I a Pathfinder?” I couldn’t help but chuckle. “Yes,” I said.

A divine appointment awaited us at the next rest area. A year earlier while I was on a Sunday-morning run around the lake near our house, two other runners invited me to join them. Though they were going in the opposite direction, and I was almost finished, I decided to accept their invitation and extend my run. I became friends with one of the men, Bett. We met up a few more times after that initial run, but then we lost touch. Who should I happen to find at this rest stop? None other than Bett and his family! I marveled at how God had placed him in my path again, and was reminded of the need to continue reaching out to him.

Finally, after about six hours of hiking, we reached the top of the mountain. After taking a few minutes to celebrate and take pictures, we started the four-kilometer hike to the campsite where we would spend Sabbath. By 6 p.m., everyone in our group had arrived safely. I praised God for His mercies. After setting up our tents, eating supper and taking showers, we settled down for the night. “Daddy, what is that?” Ali asked as she pointed to a tiny, worm-like leech attached to my right ankle. We had been warned about the leeches. As I removed the leech and applied pressure to the bite to stop the steady flow of blood, I prayed that they would stay away from Ali. I remembered hearing about how one of our student missionaries from the previous year woke up one morning to find a blood-bloated leech under her eye. The joys of camping!

After a fairly quiet Sabbath and a leech-free second night of sleep, we successfully made it back to the base of the mountain. Other than one of our student missionaries, Chris Viar, spraining his ankle on the descent, and a few other slips and falls, we all made it back safely. Seeing everyone in the group accomplish the hike was special. It was sweet to be able to experience the victory as a group. I couldn’t help but think of what it will be like to celebrate on Mount Zion someday with harps and crowns (Rev. 14:1-5). No doubt the joy will be much, much sweeter if we are able to help others “get to the top.” May we all pray and work toward that end.