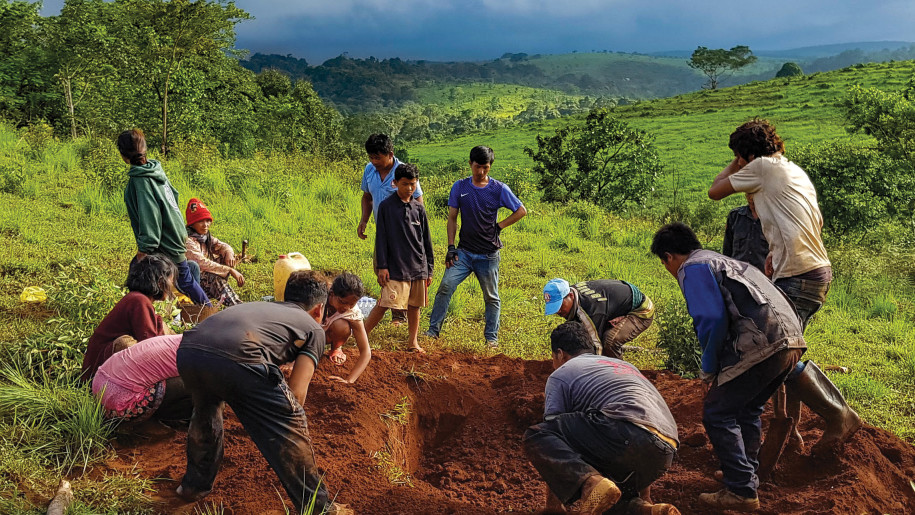 Who died this time? I wondered as I drove to pick up Greg Timmins. In the previous two months, three people from Boan village had passed away. Now I had just gotten word that someone else had died at the hospital. The family had sent a message through Cara asking that I help bring the body back to the village. After I picked up Greg, we prayed that God would hold off the rain until we returned. That’s one thing AFM doesn’t teach you about in training—how to carry the bodies of friends back to their homes for burial.

When we arrived at the hospital, the staff directed us to the morgue at the rear of the building. As I walked in, I saw the daughters of Maiyn and Chay there. I was shocked when I walked over to the dead woman’s body and recognized the face. It was Maiyn! Surprise and sadness flooded through me. Sometimes life seems so cruel. I had brought a tarp in case it was still raining. Greg and I spread it out in the back of the truck. Then we gently placed the stretcher holding Maiyn’s body in the back of the truck. We carefully placed the tarp over her in case it happened to rain some more.

As we drove back to the village that night, the story unfolded piece by piece. Maiyn and Chay had gone into town to sell produce from their fields. On their way back home, it was raining hard. As they were driving up a hill on the main road, a drunk driver came racing around the bend at the top of the hill and lost control of his car. His Toyota crossed into their lane and struck them before coming to a stop in the ditch. The driver and passenger promptly ran from the scene of the accident. Somehow Maiyn and Chay made it to the hospital. Maiyn died from internal injuries later that evening. Chay had a broken leg and was sent to Phnom Penh to receive further medical attention.

When we arrived in the village, the cries of family members pierced the night air. They wailed out their sorrow, asking why this had happened. Some became enraged and began breaking things while others shook Maiyn’s body, unable to believe she was really gone. Their grieving was intense and heart-wrenching. Greg sat off to one side praying and observing everything that was going on. I circulated through the little wooden house asking questions and talking with those who were making plans for the funeral the next day. Around 11 p.m., Greg and I left for home, knowing that the family would be up all night.

The next day when I showed up for the funeral, everything was prepared and ready to go to the burial site. They had torn boards from the house walls and built a casket. I looked at Yoh, Maiyn’s mother, and my heart went out to her. Her eyelids were swollen from crying all night. She was in the process of giving last-minute instructions. Family had arrived from neighboring villages, and I saw several faces I recognized.

The drive to the grave site wasn’t long, but we went slowly. When you’re driving the body of a friend up and down steep hills, and family members are sitting in the back of your truck, you don’t want to go fast. I was very thankful for a reliable truck with 4-wheel-low.

Once we arrived at the traditional burial grounds and the burial site had been chosen, the digging commenced. I did my best to help dig the grave, though the men from the village got a lot more of it done than I was able to. It was a blessing to be with the family and to help out in this small way. They seemed to appreciate my efforts. I left shortly after the body was buried and the construction of the traditional house and other spiritual ceremonies started. Rain was on the way, and I was needing to get back to town.

A couple of weeks later, I got a call asking if I could help bring Chay back to the village when he arrived in town that night. I said I would be glad to help. When I met him at the taxi station, he burst into tears. I could only imagine the emotional struggle he had gone through as he recovered from his injuries. I was glad I could help him and the two other family members with him. I drove them past the accident site and back to the village. Chay’s leg was wrapped in a stainless-steel contraption that immobilized his shin bone. When we arrived in the village, he told me that the doctors had instructed him to return to the hospital every three days to get the wound cleaned. I told him I would be back to pick him up.

Three days later as I was driving Chay to the hospital, we stopped at the accident site for a few minutes of quiet remembrance. At the hospital, Chay was told that he should return every day to get his wound cleaned. I drove him to the hospital as long as I could until I had to leave for meetings in another province. When I returned from the meetings, Joshua and Stephanie Lewis graciously gave me a pair of crutches for Chay to use.

During our drives to and from the hospital, I took the opportunities to share with Chay the truth about death and about God’s mercies and love for us. Please pray for Chay and the seeds that have been planted. I pray that someday he will accept Christ as his savior so that we can spend eternity together in Heaven.