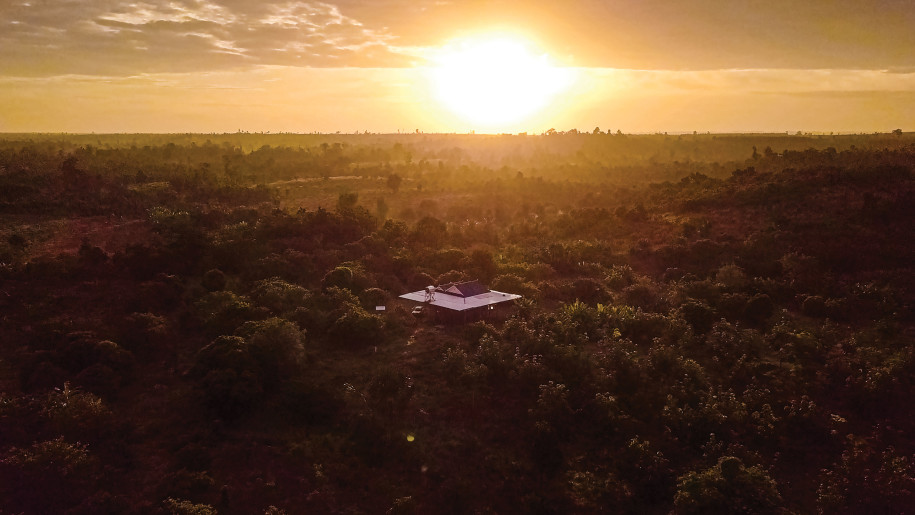 Guilty. That’s how I felt when I visited Om (Aunt) Chiruh for the first time in a month. The last time I saw her, she had just stepped on a lump of hot coal and burned her foot. Now, a large, nasty wound had climbed from the base of her second toe up to the top of her foot. During my last visit, I discovered that she had diabetes with blood sugars in the 300s. That is very high. I initially started her on a diabetic pill to see if we could help bring her levels down that way, since insulin is expensive and difficult for poor people here to adopt. Then our family got sick with nasty colds and, for fear of spreading it to others, I did not leave the house much for two weeks. After that, we went on some short trips to visit people in other provinces. By the time we got back, and I remembered to check on her, her wound had already progressed so much. If only I had come sooner, I could have prevented this!

I mentally and emotionally kicked myself for forgetting, or not prioritizing, her. Chiruh’s family explained how they had spent tons of money taking her to various doctors. I asked them what medicines the doctors gave her, only to be disappointed that nothing addressed the underlying issue—diabetes. It was then that I decided to do my best to help Om Chiruh heal. For several weeks, I visited mornings and evenings. I started her on an insulin regimen, taught her extensively about diet and lifestyle, changed her dressings, and cleaned out her wound. She was very compliant and switched to brown rice almost entirely, ate plenty more vegetables and beans and cut out the sugary foods she loved. After each session, I prayed with her, even though I am pretty shy when it comes to praying in the Khmer language. Usually, the language is so lofty and proper that it intimidates me. When I pray, it sounds like a kindergartener. But Chiruh and her daughter listen every time and echo my “Amen.” I want her to know that when she heals, it was God who helped her.

“I’ve heard about Jesus,” Chiruh’s daughter Sahly told me. “He healed a blind man once and made a lame man walk.” She had a bit of wonder on her face as she spoke. “That’s all I know about Him.”

“Yes,” I responded, “And He did many more things like that! The Bible is full of stories about Jesus working miracles.”

“Really?” They both seemed curious. “We don’t ever hear stories like that. There is no one to teach us.”

Over time I have gotten to share a story here and there as the opportunities arise. They always listen intently, punctuating my words with “oohs” and “ahs.”
Over the past few months, I have been going daily to clean Chiruh’s wound and change her dressings. All this time spent with them (about an hour or more every day) has not only grown my Khmer vocabulary, but it has also allowed me to develop a relationship with this family that I do not really share with any other Muslim families in our area. And so far, I have not had any issues with other neighbors for helping Chiruh, despite Ming K’s warnings and stories (see the July article, “Chiruh”). It made me chuckle when Chiruh quietly warned me about Ming K’s “dishonest character.” Clearly, there is something between those two neighboring women, but I do not want to pick sides.

Chiruh has not miraculously healed yet, and we had two of her toes amputated because they were too far gone. Now we are battling an infection, and sometimes I am tempted to lose faith. Other times I wonder how much I should expect God to do. Surely, I know He can heal her, but He also allows us to face the consequences of our lifelong habits. Perhaps God allowed her to have a slow healing process so that I could spend more time with her, developing such a bond that she says she considers me like a daughter. I do not have all the answers, and I keep reminding her that God is the only one who can truly heal her, even when I feel skeptical that she will beat this infection without another amputation.