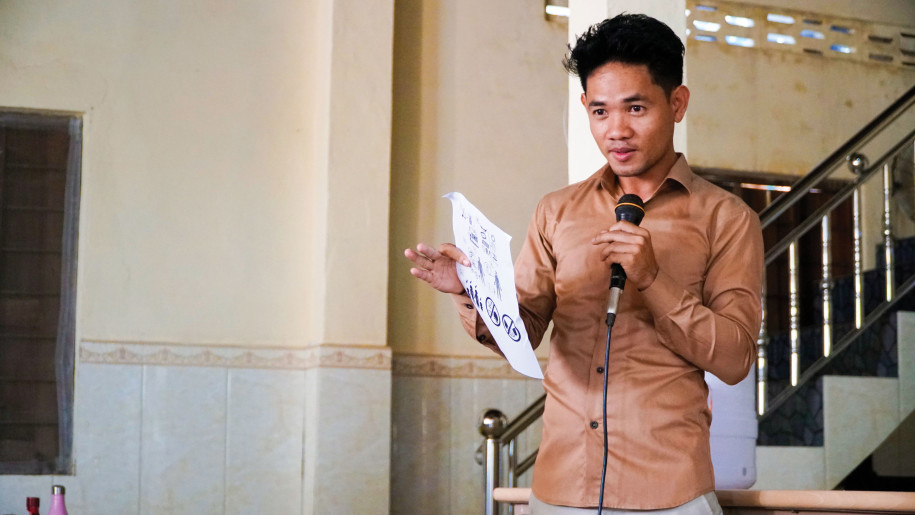 Mangoes, coconuts, and sun. Multiply that by 1,275 days and you will have a picture of our time in Cambodia. But that is not why we came. We came to tell the Cham people that they do not belong to the father of lies — Jesus has bought them.

Jesus has bought the Leng family. Jesus freed Sryneang and Vannah from drug abuse, smoking, violent tempers and unbeatable debt, plus He healed their son, Manan, of incurable Leukemia. God even sent Vannah to jail for a few months to wake him up to his needs. Then, when a brake line burst on our dump truck, Vannah saw God’s hand safely guide the truck, which was overloaded with bricks for the clinic, make it safely backward down a hill in the middle of traffic. Sreyneang has been awakened by an angel in time to attend church and, again, to help her son when he was too weak to call out. God has sent her vivid dreams and Christian doctors, and most of all, the Holy Spirit. They have started saying childlike prayers of faith.

Soty continues to grow closer to Jesus. He has pushed me to learn more than ever about both Islam and Christianity through his earnest questioning. He is intellectually honest and doesn’t excuse away solid evidence. He is a man of prayer and has seen God give his wife a dream of Jesus the very night he prayed for God to soften her heart. Thanks to your giving, he now operates a clinic and uses a small van for transporting patients.

Jesus has purchased Yusuf, also. I wear rubber boots to walk through his neighborhood, winding my way between miserable leaky huts with partial walls and roofs, where people live in the same space with cows and chickens, and where trash and bones cover the ground. I can barely stand the smell of the green puddles of cow urine under his house. While waiting for Yusuf to shower with some rainwater so we can walk to church together, I greet the witch doctor living across the street. I see injured and sick people come and go from the witch doctor’s house. Because of his sham healings, many people become maimed for life. Yet, for most Cambodians, the witch doctor is the first resort.

Jesus has redeemed Hamrey, too. Blind and living alone, he sometimes catches his shirttails on fire while trying to cook for himself. He gets picked up for Sabbath worship every week or calls to pray with me on weeks when gatherings are not allowed. He even has the keystrokes to everyone’s phone number memorized. A witch doctor lives a few doors down from Hamley, too. He once told me he wanted to learn about Jesus. I invite him to church almost every week, but he has been in such high demand so far that he is too busy plying his craft all around the country.

There are so many more precious neighbors and friends we could write about. Their lives are needy, tragic and broken. Pray for us to be strong.