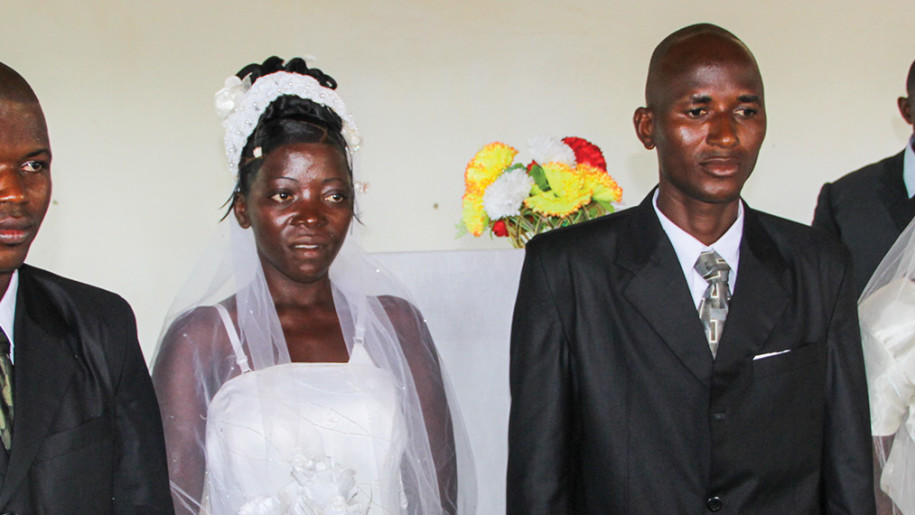 For several months, we had been praying for Sika, and now the crucial moment had come.
Scripture describes marriage as a decisive act of both detachment and attachment: “Therefore a man shall leave his father and mother and be joined to his wife, and they shall become one flesh” (Gen. 2:24).
Marriage celebrations and rituals vary around the world. In most tribes here in Guinea, engagement is called “Presenting the 10 cola nuts.” When a young man gives 10 cola nuts to a young woman’s father, it signals his intention to marry her. We also call it, “Closing the door,” meaning the young woman’s parents will not accept cola nuts from anyone else. Following the cola nut exchange, a date is set for the wedding.
On the day of the ceremony, the groom and his family present the “bride price” to the bride’s parents. Depending on the tribe and family, the bride price might be animals, cola nuts or money. As part of the wedding ceremony, the bride will be presented with a calabash containing a needle and thread, cola nuts, few grains of rice, some salt and sugar and some black pepper. The calabash signifies the fragility of marriage, and the needle and thread is to mend the marriage when it tears and to also mend the husband’s clothing. The pepper is to remind the couple that hard times may come. The sugar and the salt signify the joy and happiness of marriage. The grains of rice remind the woman that she must feed her family.
However, there is another tribe in Guinea that takes a more casual view of marriage. It allows a man and woman to live together for a number of years and “try out” marriage. Years later, often after the birth of children and even grandchildren, the couple might inform their parents that they are ready to commit to marriage. Sadly, many women in this tribe end up raising children by themselves because their men feel free to leave them for other women.
Two of our prospective Bible workers, Bernard and Victor, are members of this tribe. According to their tribal custom, they have common-law wives and children, but they are not officially married.
These two young couples have been working hard to order their lives to please God. Their spiritual growth has been remarkable, and they are excited to share their faith with people around them. Over the course of about five months, we studied with them about Biblical marriage. My wife asked Bernard and Victor, “What do you think about your relationships with your wives before God? What if a man wanted a relationship with your sister? What advice would you give him as a Bible worker?” Thinking about these questions in light of Bible truth, they realized the importance of legalizing their relationships with their spouses before God and the state of Guinea. “But what should we do?” they asked us. “We do not have money for a wedding.”
As it was done for us many years ago, we helped organize and pay for a double wedding. During the ceremony, Bernard was moved to tears. Afterwards, he exclaimed to us, “Truly God is the one who instituted marriage. Every request I made to Him concerning this wedding was granted just the way I wanted it. Praise the living God!”
Victor was equally joyful. He kept mumbling, “This is a miracle!” Afterwards, he told us, “God has done two miracles in my life that I will never forget. The first one is my conversion. I used to tell people that God does not exist, and I tried to discourage anyone from going to church. Now I am the one telling people to give their lives to God. That’s the first miracle! This wedding is the second miracle I have seen. Now I know that there is a God, and I will never stop telling people about Him and His goodness and asking them to give their lives to Him as I have done.”
Now we are ready to go anywhere Christ wants us to go. He has proven to us that He is capable and can do anything. Praise God we have more teammates. Please pray for these two families as they will be our next tent makers.

God is truly the God of miracles!