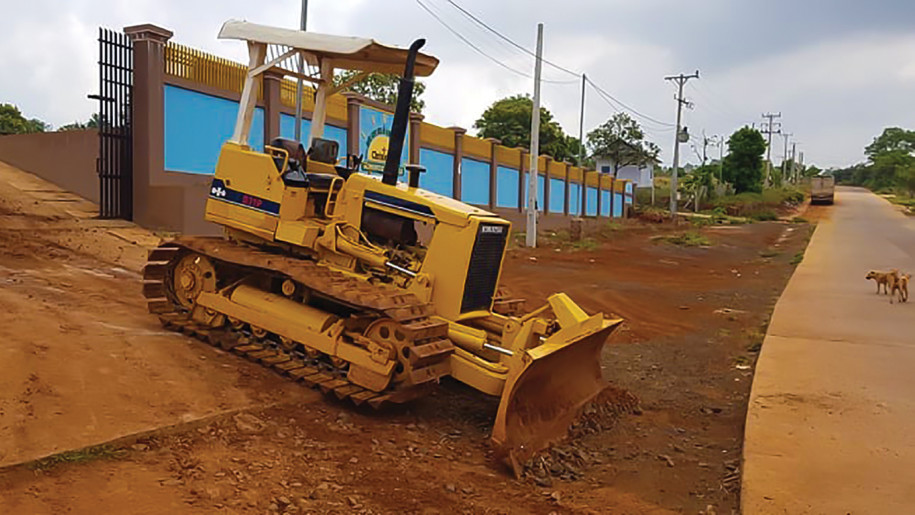 One day I was loaded up on a truck to work at the Adventist school in town in order to move some dirt around over the holiday. My driver put a couple blocks of wood behind me to keep me from rolling off the truck. At the entrance to the school, there is a long driveway that climbs an incline up to the front of the school. On the way up, things got a bit bumpy because of a ridge placed for the sliding gate to ride on when it opens and closes. My driver gunned the engine as we climbed the hill. When we hit the bump, it made me jump. Before I realized what was happening, I was sliding down and off the back of the truck. It was a long drop and I landed with a crash. My blade kept me from turning over, but I continued to slide down the hill and back over the gate bump. There was a road at the bottom of the driveway and across the street was one of the teacher’s houses. Would I hit someone or something?

When I got to the bottom of the hill, my blade lodged in the dirt at the edge of the road and I came to a lurching stop. My batteries got jumbled so hard that they started leaking acid. Just then, I saw one of the English teachers pulling up the driveway. Across the road, another teacher and her children stood in shock, gaping at me. I was so thankful that God had allowed my blade to stop me and that I didn’t cross the road and hurt anyone. After getting my batteries replaced, I worked perfectly as I finished moving the dirt at the school.