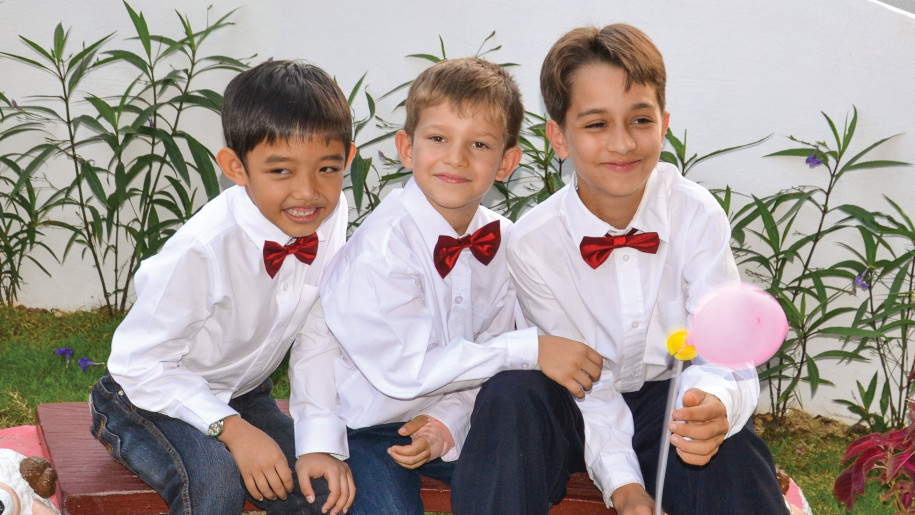 What do an accident, a culture study meeting and a soccer school have in common? More than you might imagine! As we sat back to enjoy the first recital at Peace Music Academy (PMA), Ricardo and I couldn’t help but marvel at how God networks and how He works all things together for good.

As our voice student Tum began to sing, I thought back to the accident that had set in motion the chain of events that brought her here. When a teenage girl on a powerful motorcycle tried to pass our truck on the right, her handlebar grazed the side of our truck, and she went down, sliding across the entrance of a side road, stopping just before the curb. Seeing her body slide to a stop, my body went numb. Then she lifted her head, and I began to breathe again. She got up and began to brush dirt and pebbles off of her school uniform. The relief and gratitude I felt were so complete that I didn’t think to pray that something good would come from the accident. I just hoped—along with her mother—that she would be more careful in the future.

But the accident brought a very tangible blessing. Our insurance company sent us to a specific shop to have the scratch on our truck fixed. While we were there, the shop owner noticed our music school’s name printed on my polo shirt. “Where is your music school?” he asked. “Is it at a church?” We explained that we were Christians but that our school was a regular one registered with the government. He and his wife had been looking for some extracurricular activities for their daughters, and he immediately called his wife to tell her about it.

A week later, the man’s wife came to our school to check it out. “It really is a school!” she exclaimed, and then hurried to explain that she respects Christianity, that all religions are good and teach good things, and that she is quite happy to be a Buddhist. She ended up registering her two daughters for classes—one for voice and flute, and the other for violin.

Tum’s recital song was beautiful, and her parents glowed with pride as they listened.

This family has been a great blessing to us and our school. They are at every PMA function. As fellow business owners in Khon Kaen, they have given us very helpful advice and ideas, and we are grateful to them.

When Jom got up to play his violin, Ricardo beamed. Jom was our first violin student, and Ricardo was his teacher until Breanna Thornton arrived. We met Jom at the soccer school our children attend, and his father, Jip, and Ricardo quickly became good friends. Jip has helped our school advance in many ways and is as happy as we are with its growth. This family has not only become an important part of our school family but of our team family as well. We have shared holidays and birthdays with them, and we are grateful for their friendship.

The English and music class students were scheduled to perform next, but a quick reshuffling of program order was done to ensure that Jumbo’s father, a politician whose plane had just landed in Khon Kaen, could make it in time to see his son perform.

Our relationship with Jumbo began three and half years ago when we met his mother, a professor in the Social Science department at Khon Kaen University. We studied Thai with her before going to a language institute in Bangkok. After our return, we kept in occasional contact with her. When PMA opened, we told her about the music school, but Jumbo was young, and she was very busy. Then our teammate Daniëlle K. invited her to participate in one of our culture study meetings. It just so happened that the meeting that month was held at the Sorensens’ house—which happened to be one street over from Jumbo’s house. When Chris Sorensen started the English and Music class, he made a point of inviting Jumbo. Now Jumbo studies piano at PMA, and the school has been a wonderful social context for him.

We are blessed to be part of God’s networking here in Khon Kaen, and we look forward to how He will complete the work He has begun. Thank you for your prayers and support that make this work possible.