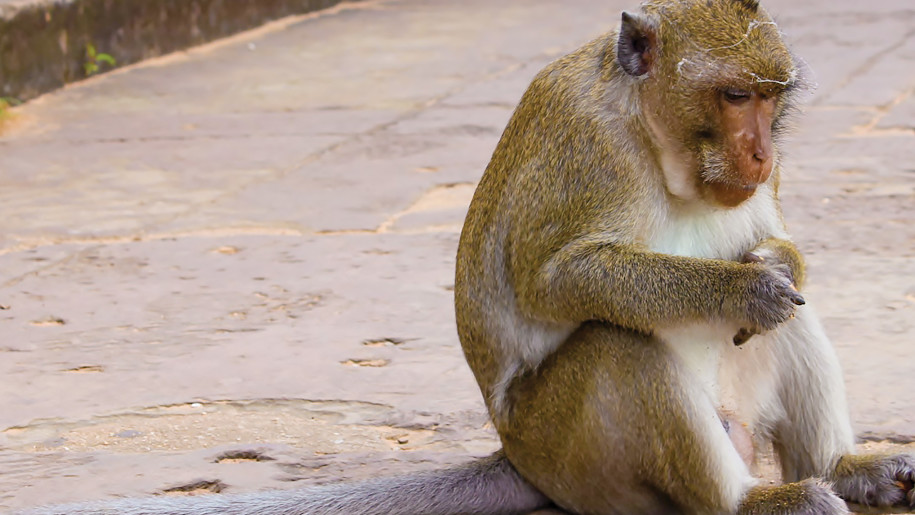 Near the town of Kosum Phisai in the Mahasarakham province of Thailand, there is an old forest park with towering tropical hardwood trees that have stood for centuries. Swinging in those trees are troops of mischievous monkeys that have multiplied beyond number, largely due to generous food handouts from park visitors. Along the east side of the forest park runs the Chi River, which is very muddy, full of living things and fun to swim in—if you like swift currents and are not afraid of ghosts. You see, just beyond a certain shallow stretch of river where the current moves quite rapidly, there’s a large, quiet spot in the current where locals allege that many unfortunate people have drowned through the years. Local people are careful to stay away from there because, well, you never know when some evil river spirit might choose to pull the next victim under the muddy surface.

One particular Sabbath afternoon, completely unaware of the fearful history of this place, two little American missionary kids and their missionary daddy decided to beat the heat by floating downstream along the tall, grassy banks of the lazy Chi River. Oh, the water felt so good! Alina and her younger brother Jeshua dog-paddled happily along with their daddy, Christopher, who kept an eye on both of them. The children had fun trying to grab on to low-hanging branches and clumps of grass to momentarily resist the drag of the cool current. The current always won, but they weren’t concerned. They laughed and enjoyed it thoroughly. But their daddy noticed, and he kept an even closer eye on them. Christopher knew his kids’ swimming ability and didn’t worry that they would suddenly go under, but he wanted them both to stay near him nonetheless, so that when they reached a suitable landing area he could easily pull them out onto dry land.

As they floated around a bend, they passed a lady in her 50s who was fishing for freshwater shrimp. She was surprised to see this foreign family floating by, and she called out in alarm in the Thai language, “Why are you swimming here? Many people have drowned here!”

Christopher smiled reassuringly at the woman and just nodded as he grabbed his children’s arms and pulled them up to the riverbank.

“Come on, Daddy! Let’s do it again!” cried little Jeshua as he and Alina scrambled up the bank and dashed back up the path toward the spot upstream where they had entered the water a few minutes before. “Wait for me!” their daddy called. But he thought to himself, Should we really go again? Sure, one or two more floats down the river would be nice, and swimming isn’t forbidden here. But . . . oh, why not? I’ll just remind the kids to stay close to me.

So once again Alina, Jeshua, and their daddy stepped down into the Chi River and began floating along with the current toward the same exit point.

When the shrimp lady saw the three Americans floating around the bend again, she called up to a man who was sitting on his parked motorbike at the edge of the road that ran along the river. After some loud, animated pleadings on the part of the shrimp-fisherwoman, the man walked down to the river’s edge. Approaching Christopher, he lifted his hands to Wai, and then he said in broken English, “She say you no swim this place. Some people die here. Maybe ghost. Please!”

With another faint smile and a sigh, Christopher figured it was probably best just to get out. Not that he was worried about a drowning incident, and he certainly didn’t fear ghosts. He just felt bad that their Sabbath-afternoon activity was causing distress to these kind Thai people. So, for their peace of mind, he decided to help his kids over to the edge of the river to get out for good.
Just then, one of the kids shouted, “Hey look! There’s a monkey sitting on that man’s motorbike!” And sure enough, there was—a curious little gray monkey who seemed fascinated with something on the motorbike. Then the monkey grabbed the thing and scampered up one of the tall trees and out onto a large branch that stretched over the river.

“What did the monkey take?” Christopher asked the man, whose face now had a very worried look. “It’s the key to my motorcycle!” the man said with a moan.

“Oh no! Is that key ring buoyant?” Christopher asked, noticing a yellow attachment on the key ring that looked like foam.
“Yes,” said the man, “the ring does float.”

“Then you’re in luck,” said Christopher. “All we have to do is wait until the monkey gets bored with the key and drops it into the river, and then I can swim out and get it for you.” That seemed to bring some relief to the man, but not much, and not for long. As they watched the little monkey, it suddenly took a bite out of the yellow piece of foam, perhaps hoping it was some kind of odd banana. Yuck! The first bite was not what the monkey was expecting. He spit out the chunk of shredded foam, which floated down in the breeze, landed on the surface the river and quickly disappeared downstream. Undeterred, the monkey took a second bite of foam, then spit it out just as fast. Where’s the sweet part of this banana? he seemed to be wondering as he bit off piece after piece of the key ring float until there was nothing left but the brass motorbike key and its metal key ring.

Christopher felt largely responsible for this Thai man’s key. If this crazy American family hadn’t been swimming in that ghost-infested river in the first place, the Thai man wouldn’t have felt the need to leave his key in his unattended bike and rush down to warn them. So Christopher quickly stepped back into the fast-moving river and waded in the waist-deep water to the spot directly beneath the branch on which sat the naughty key thief. There Christopher prayed, “God, please help us get this man’s key back.”

Then suddenly it happened. His curiosity apparently satisfied, and convinced that there was nothing to be gained by gnawing on a useless piece of brass, the monkey dropped the key. As if in slow motion, Christopher saw its silhouette against the blue-green of the sky and leaves. As he lifted his open hands, the key struck one of his palms. But as his fingers closed around it, the key rebounded out. It arced down and bounced again off his bare chest. Finishing its journey with a couple of nice somersaults, it sliced into the river like an Olympic springboard gold-medalist. Instantly, it was lost to view in the swirling, muddy water.

Christopher plunged down after it, fervently praying, Lord, please let me find that key! Please don’t let it be lost! Of course, his eyes were closed underwater, for not even goggles would have helped him see in that muddy river. Frantically, he ran his fingers back and forth over the mud, sand, stones and tree roots on the river bottom as he kicked his feet wildly, fighting the current. Five seconds passed. Ten seconds. Fifteen. Had the current swept the key away into the “spirit-infested” deep? Had it sunk into the soft mud? Dear God, please . . . he continued pleading, quickly growing tired.

Then, all of a sudden, Christopher’s finger brushed over something hard, and he grabbed it. It was small. It was smooth. It was . . . the key? It had to be the key! Immediately he prayed, before he even opened his eyes, Thank You God! Oh, thank You! Resurfacing out of breath, Christopher stood and triumphantly held up the key.

“Thank you so much!” said the kind Thai man. “That was the only key I had for my motorcycle.”
“Thank God!” Christopher exclaimed.

What joy! What relief! And all over a key! It should make us wonder, how much greater is the joy that all heaven experiences when God’s wandering children are brought home—when lost sinners are found? Looking to Jesus on the cross, we can begin to understand that for THAT joy, no effort, no sacrifice is too much!