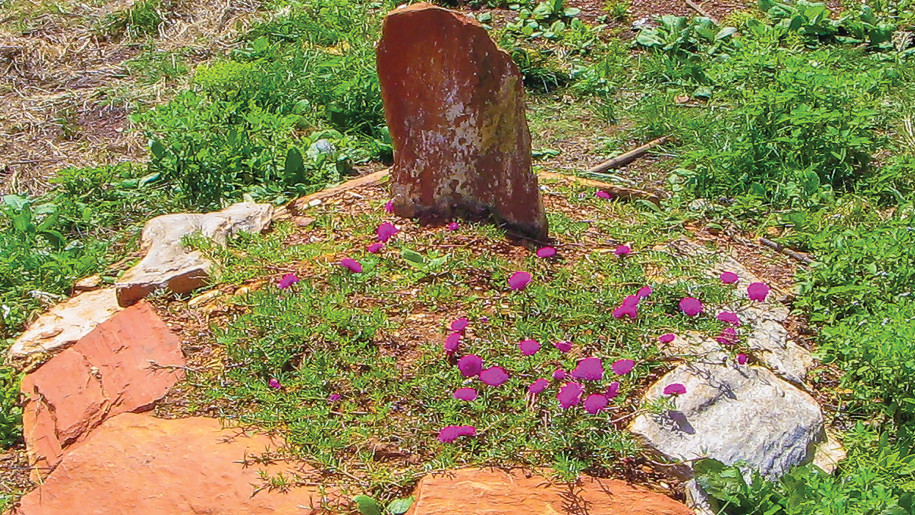 Tchenti was a kind, quiet man in his early fifties, working hard to feed his two wives and 11 children. He was a night guard at a local hardware store, and during the day he would work in the fields with his sons.

About three years ago, Tchenti became sick, but he didn’t tell anybody, and he didn’t see a doctor. Instead he treated himself with all sorts of painkillers, antibiotics and narcotics that are easily available here in Benin. He thought he was treating the sickness, but illiterate and ignorant as he was, he made it worse with his toxic mix of medicines.

At some point we heard that Tchenti had a stomach ulcer, and we gave him some advice on diet. We didn’t see him for a while after that since he was working all the time, but when we met him recently at the hardware store, he looked very thin and tired. His usually bright eyes were lusterless. He told us he wasn’t able to eat anything because of the pain.

Tchenti ended up going to the local hospital and was referred to another hospital 50 km north for a gastroscopy. However, his family didn’t have the money to send him there. When Toussaint went to visit him a couple of days later, Tchenti showed signs of liver disease. Toussaint advised him to go back to the hospital to be checked for hepatitis or liver cancer. On a Sabbath morning he was examined and hospitalized. On Sunday Toussaint went to visit him and later told me that he was not looking well at all. In this culture, people don’t ask doctors questions, so none of Tchenti’s family members could tell us what he was suffering from.

On Tuesday, I went with Toussaint to visit Tchenti, and I was shocked when I saw his condition. He was conscious, but I wasn’t even sure he recognized us. His eyes were vacant, confused and frightened, and he seemed to look right through us. I went to the doctor’s office and found some friendly nurses who let me take a look at Tchenti’s chart. I didn’t understand all the medical terms, but I understood one: cirrhosis. That’s all I needed to know. When I got back to Tchenti’s room, his 15-year old son was with him along with Tchenti’s youngest brother. In this culture, you don’t tell people, “Your dad and brother is dying.” What should we say? Then nurses came in and announced that the hospital staff would be going on strike the following morning, and all patients would have to go home or to a private clinic. We told Tchenti’s son and brother that he was too weak to be taken to another hospital, and that it would be best to take him home. That was as far as we could hint about how bad his condition was.

I was shocked, sad and confused. Several of Tchenti’s children are close with us. His youngest child is only two years old. What would happen to them? From what I knew, Tchenti wasn’t a Christian, and now he was unaware of his surroundings. I felt very bad that we had missed the opportunity to pray with him. When we got home, I cried out to God. I didn’t even know what to pray for. It all felt so hopeless. I just asked God not to let Tchenti suffer, and that His will be done.
That night at 11 p.m. we received the phone call. Tchenti had died at the hospital. God had spared him the pain of being transported. His younger wife, Mama Lucienne, had been with him when he died. Now his body was at their house, and they were making preparations for the funeral. Toussaint went to join them, but I decided to go to bed. The next day would be long and demand lots of emotional energy.

At 1:30 a.m. Toussaint came back for shovels and picks to help dig the grave. I asked him how the kids were doing. He said that some of them had gone to bed, but Fiacre, the five-year-old, was not willing to lie down. At 5 a.m., Toussaint finally came home, bringing little Fiacre with him, who had stayed awake all night following Toussaint’s every step. Then we all went to bed for a few hours of restless sleep. At 8 a.m., Toussaint took Fiacre back to Tchenti’s house to see how things were going. About two hours later he called to tell me that the funeral was about to start.

When I arrived for the funeral, I was surprised to see that it was being directed by the pastor of the Pentecostal church that Mama Léon, Tchenti’s older wife, attends. Later, we heard that Tchenti had given his life to Christ while in the hospital, so Mama Léon and Tchenti’s younger brother had decided he would have a Christian funeral. The old men were not happy about that, but Mama Léon is not someone to negotiate with. So, instead of being buried in the traditional graveyard with all the traditional ceremonies, Tchenti would be buried in the middle of the family’s courtyard.

Many people had come for the funeral, and I was amazed that they had gotten the news in such a short time. All Tchenti’s children were there, but not his wives. In this culture, a wife or mother is not allowed to watch the funeral of her husband or child. Mama Léon was sitting in her living room and listening to the proceedings from behind a curtain. Mama Lucienne was standing outside with a sheet over her head and two old ladies by her side making sure she was not peeking.

The casket was lowered into the grave. After a few words from the pastor and another man, the men started shoveling dirt back into the grave. Some refreshments were served, and then people started leaving. The burial was over. Now we finally were able to see the wives and give them our condolences.
Over the next couple of days we visited the widows several times per day, and I was able to observe a lot of what was happening. It was interesting to see the difference between the two wives. Mama Léon had refused all traditional ceremonies. She didn’t allow her head to be shaved on the third day. She freely received visitors, and she cried and talked. All of this is forbidden by tradition. There was a constant stream of visitors—family members and church members, pastors from her church and other churches. It was beautiful to see how the community supported her. We were able to talk and pray with her.

On the other side of the house was Mama Lucienne, with whom we are actually closer. She decided to follow tradition. She was guarded by two older ladies who took her down to the creek morning and evening for ritual washings. They rubbed her down with pungent leaves, dressed her in clothes turned inside-out and followed every conversation visitors had with her. Few people came to visit her, so most of the time she sat alone or with little Isabel on the floor in her empty living room. All we could do for her during those days was take care of Fiacre and his older brother Ignace who both came down with malaria. She herself had a bad cough, which became worse with every bath she had to take in the cold, polluted creek. What a difference between those two ladies and their ways of mourning.

However, as the days passed, we realized that Mama Léon and the other Christians in the family had a strange understanding of what it meant to be free from the constraints of tradition. A traditional funeral is usually followed by several days and nights of eating, drinking and partying, but only if the deceased was an old person who had lived a full life. Tchenti hadn’t been very old, so his death didn’t fit in that category. Christian funerals usually end with the reception on the same day, and this particular Pentecostal church prohibits alcohol. Knowing this, we expected the funeral would be over after all the visitors had left. But to our surprise Tchenti’s younger brother and several other “Christian” family members started making preparations for a long night of loud music, playing cards and drinking liquor. When we saw what was going on, we took Fiacre and Ignace to sleep at our house. For three nights the party continued. Both wives were sick and tired. They had headaches and desperately needed rest. But the constant stream of visitors who came for the party required feeding, which used up all the money and food people had given the wives.

We asked Mama Léon why she wasn’t just telling everyone to drink and party elsewhere. As the older wife, she had the right to kick them out. She replied that she couldn’t do anything and would just have to sit it out, since the old men were requiring the party. We were confused. Hadn’t she refused all the other ceremonies the old men had required? And had they really asked for the party? (Later we found out they hadn’t; it was the young guys who wanted to party.)
In the aftermath of the funeral, six of the 11 kids got sick and needed medical intervention. All the money was spent, and none was left for the new schoolyear that was about to start. Mama Lucienne’s guards have left, but she is not totally released yet. She still has one final ceremony to do before she can return to her normal life. But she is allowed to go out, and she comes by our house daily for a short visit. We helped her put the kids back into school, since she doesn’t have a job like Mama Léon. In gratitude, she often helps us with laundry and field and yard work. We hear her contagious laugh again, and we hope to be able to show her a different kind of Christianity and point her to the One who really makes us free.