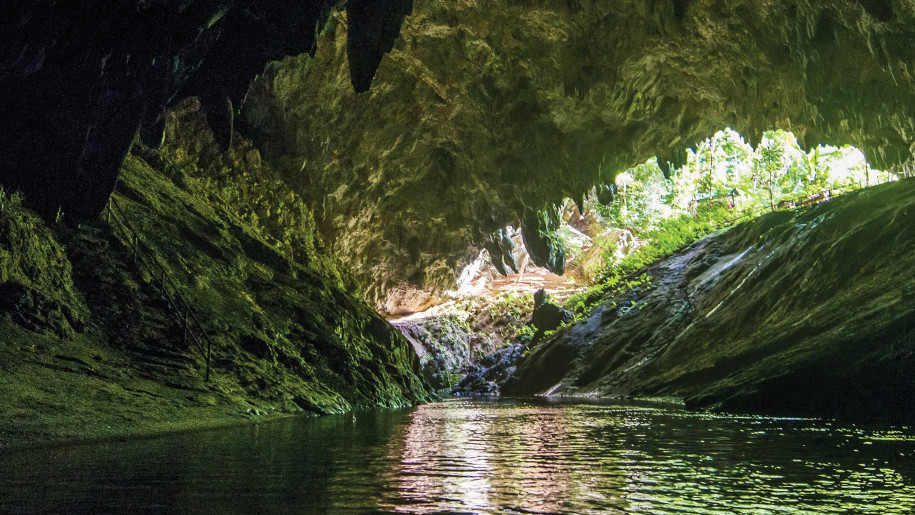 It was June 23, 2018. Twelve young soccer players in Chiang Rai, Thailand, ages 11-16, and their 25-year-old coach decided after soccer practice they would explore the nearby Tham Luang Cave, one of the longest cave systems in Thailand. Soon after they entered the deeper recesses of the cave, early monsoon rains began to pour down. Before the team could escape, they were trapped by a flash flood of muddy water that quickly rose toward the ceiling.

Later that evening, a worried mother notified the police that her son was missing. At the same time, a park ranger was making his rounds and discovered soccer shoes lying next to 13 bicycles chained to a fence near the cave’s entrance.

Knowing the danger posed by the recent heavy rains, he immediately ran inside the cave and began calling for the boys, but he could not go in very far due to the rapidly rising water. So he started a chain of emergency calls—first to park officials and local police and up the chain of command to provincial and national authorities. The army was called and then Thailand’s Navy SEALs. Cave-diving rescue experts from England were consulted and flown in to help. Other cave-diving rescue specialists from Australia, China, Myanmar, Laos, and even the U.S. Special Operations Command Pacific Search and Rescue Team based in Hawaii were invited, each bringing their expertise and hi-tech devices to survey and map the cave’s passageways and locate the boys and their coach.

Frantic parents and anxious relatives gathered outside the cave’s entrance, praying and calling out their sons’ names. Hope and dread filled their imaginations. Knowing that most of the boys couldn’t swim, they hoped with all their hearts that their sons had been able to scramble up to a high spot in the cave away from the rising water. But what if the fast-moving flood struck while they were in a low part of the cave? Would the rescuers find their swollen bodies floating under the ceiling of a flooded passageway? Or would the rushing underground river suck them deep into the earth never to be seen again? What if they had been able to find only a small pocket of air? Could they be suffocating in the darkness at this very moment?

Each parent fought desperately to dispel their own private fears and tried to speak words of hope to themselves and others.

One of the 12 lost boys, Adul, was from a Christian family. His parents and other church members began to pray to God and sing songs of hope near the cave’s entrance. At the same time, a lady claiming to be a spirit medium began to perform a ceremony with a fishing net that she said would cause the spirits of cave to release the boys trapped inside.

As word of the rescue operation reached the press, the whole nation and much of the world began to follow the story. Millions of people prayed in whatever way they knew how to whomever or whatever they believed could help. Over the next few days, more than a thousand volunteers from around the world—individuals, local hospital staff, private and public companies, the local electric authority, all levels of government, even the Prime Minister and the King of Thailand himself—began offering their support and encouragement to the families and rescuers.

But in the mountains, monsoon storm clouds continued to pour down heavy rain that rushed into the cave system, overwhelming the many powerful water pumps that worked to drain the flooded passageways. The dark, cold coffee-colored torrent overpowered and flushed out the experts and Navy divers who struggled in vain to swim upstream. It was a crushing blow to the families’ hopes when officials were forced to call off the cave rescue, at least until the water levels dropped. But when would that possibly be? A sign near the cave entrance bore the ominous warning, “Danger! July through November is cave flooding season.” Obviously, waiting four months would mean no survivors.

But hope revived as hundreds of park rangers, police, soldiers and climbing experts combed the rain-soaked mountain forests looking for undiscovered “chimney” passageways or large fissures in the mountain that might connect to a large, elevated chamber in the cave known to locals as Pattaya Beach where they thought the boys might be sheltered. But though many holes were discovered, they all either ended or were too narrow for rescuers to enter. Helicopters lifted drilling machines to strategic locations in the mountains, but drilling proved ineffective as well.
A week passed. Then on Sabbath, June 30, there was a break in the rain. New, larger pumps that could move water 10 times faster were installed at various locations. Soldiers and citizens worked together to construct small dams to divert rain-fed streams away from the cave system. Finally, water levels in the cave dropped to a point where the SEAL teams and other international divers could resume their round-the-clock search, fighting their way like Alaskan salmon upstream against a current that was especially swift in the narrow passages. At times they had to hack away at rock and debris to enlarge the opening so that they and their air tanks wouldn’t get stuck. All the while, outside, parents and relatives, exhausted by many days of ceaseless vigil, anxiously awaited news, hoping against hope that their boys would soon be found alive.

Finally, the leading rescuers reached the high chamber called Pattaya Beach. But to their disappointment, they found it deserted and flooded. Still, the team pressed on, led by experienced UK rescue divers, Rick Stanton and John Volanthen. They pushed deeper into the cave system, now about a kilometer beneath the mountain’s surface. It was Monday night, a little after 9:30 p.m. when up on a wet ledge, completely surrounded by water, they discovered the soccer team and their coach! Their bodies were thin from lack of food, but they were all alive and smiling! The divers relayed the message back to the rescue command center, and the Chiang Rai provincial governor made the joyful announcement at 10:40 p.m. Social media instantly lit up with millions of jubilant posts and forwards and Facebook “likes” and “loves.” Tears of joy ran down faces of family and strangers alike all over Thailand and around the world. Shannon, our kids, and I (not to mention our whole church family) had also been praying earnestly for these kids and rescuers ever since we learned that they had gone missing. Now our emotions overflowed with relief. “Praise God! Praise God!” we said. What an ordeal this has been! What a tremendous rescue effort made possible by so many people! What teamwork! What support!

I see so many parallels between Thailand’s cave rescue mission and Heaven’s cosmic rescue mission. Both have their victims, lost in the dark and in danger of perishing. Both have their rescuers working together under the commission and ultimate approval of the King. One rescue mission commands the attention of the world; the other consumes the attention of the unfallen universe. Those two UK divers were just the tip of a long spear composed of over a thousand active workers and support personnel from many nations. It is the same with our AFM team of missionaries, pastors, teachers and SM volunteers working at the tip of a long spear of prayer and financial supporters from all over the world, each of you doing what you can to encourage and support God’s rescue mission.

Even yet, billions of God’s children remain lost in the darkness of this world, perishing for lack of the Bread and Water of Life. May God help us all not to grow weary in this rescue mission, wasting our time on worldly distractions or, worse yet, fighting among ourselves. Our mission is urgent! We must press on, praying and working together, for we are indeed racing against time. God’s lost children of this generation cannot wait forever.
As for our rescue mission here in Khon Kaen, Thailand, we continue to pray and press on with our church and school plant, our Bible studies, music lessons and programs, health ministry, Pathfinder club and church choir. We have hired an architect to design a new Regional Youth Training Center, a facility that will house our music school, church office and seminar rooms, a multi-purpose auditorium for our concerts and Sabbath worship services, a fellowship hall and a demonstration cooking-school kitchen. Our multi-faceted vision is to bless and equip not only young people from Khon Kaen but from all over Thailand, Laos and Cambodia as well. It’s a big vision, but thankfully we have a big team led by an even bigger God. Thank you for being part of His Great Rescue!