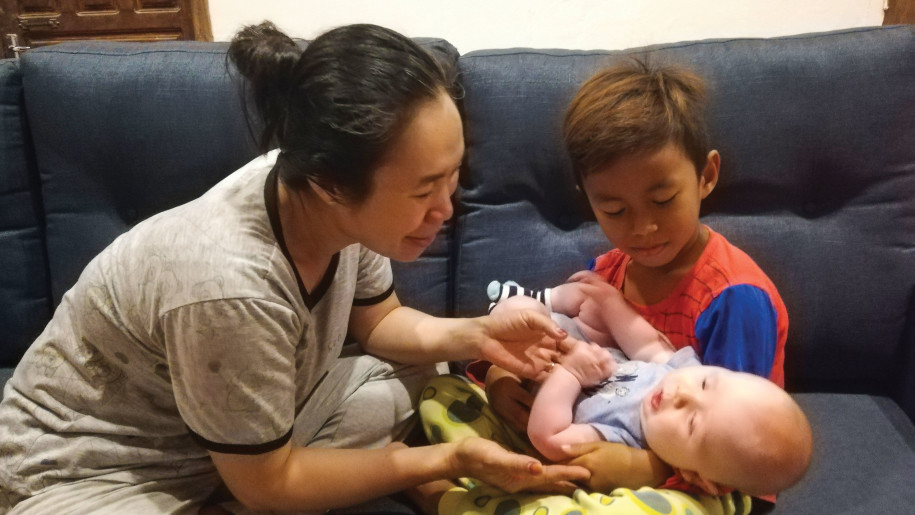 When we bought our house here in Cambodia, there was a mysterious row of tiny brick foundations behind it. The previous owners said they had been building coops for chickens they raised to feed their giant pet python. “He lived right in this house with us,” they told me. “We loved him so much. He was our treasure.”

This is the story of Sombat the snake, exactly how his mom told it to me. His human mom, that is.

When our daughter Nita was born, we lived on our boat on the Mekong River, ferrying tourists and supplies as far as we could go up upriver. One night, the place where we stopped to sleep was thick jungle. When Grandma woke up the next morning, she pulled what she thought was the string to untie her mosquito net. But it wasn’t a string, it was the tail of a tiny hatchling snake that had come and slept next to us to stay warm. He was only about as thick as a chopstick and only about as long as a phone charging cord. We took him out and let him go. But instead of slithering away, he kept coming back again and again!

It seemed strange to keep him as a pet, but that was what he wanted. We held him and fed him scraps. He liked milk and bread. He got bigger and bigger. After a while we started feeding him meat and fish. He ate and ate. Soon he was as thick as a wrist, then an ankle, then a thigh. Eventually he got seriously big—about seven feet long!

We named him Sombat, which means treasure. He liked to give hugs and play with the kids. When Nita learned to roll over and crawl, he would follow her and make sure she didn’t fall. When she was on the living room floor with her bottle, he would slide under her head to give her a pillow. He would roll her on her side, curl around her and give her his tail to hug. Sometimes he would accidentally push her bottle with his tail, and she would get mad and bite or scratch his head. The scales on his head were often roughed up, but he never did anything back to her.

When Sombat was still small, he would wrap himself into a ball and let the kids roll him around the floor back and forth. He really enjoyed it. When he got dizzy or the kids played too rough, he would uncoil and relax for a while.

Everyone in the area knew we had a giant snake for a pet, so Sombat’s reputation kept us safer than any watch dog could have. Many people wouldn’t even set foot on our property out of sheer terror. There were no rats or roaches in the house or yard, either. They were afraid as well.

The truth was that Sombat was shy of strangers and would slither off and hide when we had visitors. He could smell them coming and would disappear into our bedroom before they even got near our door.

Sombat enjoyed bubble baths. He liked getting scrubbed down and toweled dry. He also slept on the bed with Nita and me. He liked to wriggle under us and get as close as he could so we could lean on him or hug him. His body felt cold, and he enjoyed our warmth. He was very clean and never crawled anywhere dirty. He only pooped outside, and it was round and hard like an egg.
During the day, we always left a door or window open so Sombat could go and come as he pleased. He was never locked up. One time when we left him alone for too long, he went looking for us and got lost. We searched for a week. Workers finally found him hiding under some big tanks at a nearby gas station. An excited crowd gathered, but no one dared go close to him.

We came running as soon as we heard. “Don’t hurt Sombat!” we begged.

“Everyone get away! You, too!” The police shouted at us. “Why are you saying this snake is yours? People don’t live with snakes!”
Grandma called to Sombat and coaxed him out. He crawled up our legs and onto our shoulders. We gave him hugs and kisses, and then we rushed our poor frightened pet away from there.

Sombat was a great swimmer. He liked to play hide and seek with us in the river. All of us together couldn’t catch him. He’d go down one place and then pop up somewhere completely different. Sometimes we would feel him zip past our legs—so fast! When it rained, he loved to splash and chase the neighborhood kids through the puddles.

He liked to take naps with Grandma in the hammock. He would curl up with her, and she would say, “You can only be here if you are still.” But he could only be still for a little while before he wanted to play. “Please let me sleep a little longer, Sombat,” she would say, and he would try to be still again.

Sombat became famous among the tourists who rode on our boat. Many times, people asked us if we would let them film Sombat for movies. But we knew he wouldn’t like that, so we always said no. Our cousin thought we should do it because we could get paid lots of money.
One time when we were gone on a long trip, this cousin stayed in our house and took care of Sombat. He decided he wanted the money from the movie studio, so he put Sombat in a big box and drove him to the city. Shortly after they got back home, Sombat went out through the window in the room where your son Nathan sleeps now, and he never came back. When our family came home and learned that Sombat was gone, we were heartbroken. He would be 15 now, the same age as Nita. Oh! Just telling the story makes me miss him so much!