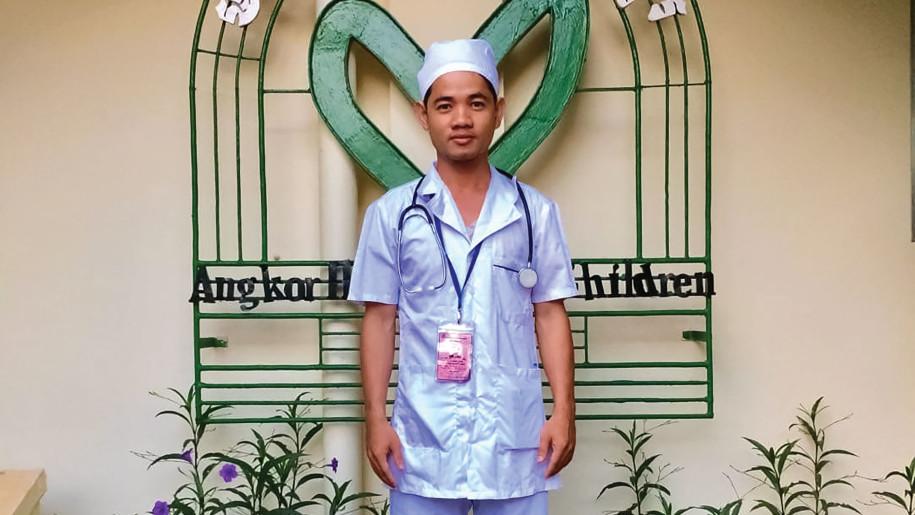 Since he finished nursing school and returned home, Soty has been part of our family. We have enjoyed learning so much more about him, and we have been studying the Bible together nearly every day, sometimes the whole morning or afternoon. “Two hours, too short!” he says. “Tomorrow I’d like to have more time.” He can’t get enough. He hasn’t read the Qur’an in almost a month because he is totally engrossed in the Bible. He told us he is so close to becoming a Christian, shutting one eye and holding a thumb and a finger together, squinting through the tiny crack. But I am getting ahead of myself.

When Soty was less than a year old, his father was crushed by a tractor and died. His mom departed for Malaysia, leaving him with his dad’s Buddhist older brother. His uncle treated him okay, but his aunt resented him. Once when Soty was eight, his mother came back to visit with her new husband and their kids. It was the first time in Soty’s memory that he had seen her. He had been praying every night to have his mom back, but she barely noticed him. It broke his heart. Then she was gone again, this time to Thailand.

Soty bounced between family members willing to take him, and he changed schools often. Eventually he fell a full year behind. He got teased for not having parents, and bullies pushed his head into the dirt with their feet. He developed a fear of imposing on others, and he kept all his struggles to himself.

Now, little by little, Soty is learning the security of unconditional love. Once he called me from school distraught and sobbing, telling me he’d had $100 stolen. He was moaning. I told him not to worry, that I had lost more money than that before. We ended up laughing together.
When Soty was 14 and in the eighth grade, his mom came home again. But she didn’t call for him. It wasn’t until his uncle kicked him out that she agreed to let Soty stay with her family. For the first time in his life, he was surrounded by Muslims. He didn’t want to accept Islam just because everyone else did, so he set out to prove it for himself. He was too embarrassed to study with the young kids at the religious school, so he began to teach himself. He read the Qur’an every night, enthralled with the stories of the prophets. He read till his eyes burned and his hands lost their hold on the giant book and let it drop on his face.

He went to the mosque five times a day to pray even if no one else was there. He led the prayers and recited Qur’anic passages over the loudspeaker with enthusiasm. After three years of exhaustive study, he fully embraced the teachings of Islam.

During this time of Soty’s life, I was teaching him English. My house was a safe haven for him when his mom and stepdad would get into violent fights. My main memories of him were his eagerness to learn, his friendliness and his reputation for being very devout.

After I left Cambodia, Soty befriended the Nicholaides family. Both the Nicholaides and the Hutchison families adopted him as their own, giving him the family he’d never had. Soty was featured in an AFM film called Whatever It Takes, the Great River Story in an extra called, My Name is Soty.

Just this evening as I was writing this article, Soty called, and we talked about his life. “I have prayed to Allah since I was small, even before I knew the Arabic prayers and laws of Islam. I prayed that I could study and get a job and that I could become a doctor.

“When Amy and Ellen (The Nicholaides’ student missionaries) invited me to meet Bo Hutchison, I told him my story. I told Bo about my prayers. But I never dreamed I could actually get here. If I had not found Bo, I would have gone to another country to work like the rest of my family. He said one thing to me that lifted my heart to the clouds: ‘We want to help you.’ He personally brought me to medical schools around Cambodia. He cared about me!

“By getting high marks on my exam, I won a scholarship to nursing school. Bo helped me with living expenses. I worked feverishly to make the best of his help. I worried it was too good to last. Two years later when the Hutchisons returned to America, I almost pulled my hair out in despair.

“Bo told me to call you, and you encouraged me. When I got a passing grade, I jumped and danced alone in my rental room. I called you, and we spoke for two hours.

“My other dream was to help people like Bo did. If setbacks happen, I won’t give up. Can I tell you one thing I want you always to remember? Every confidence you place in me is what I hope I can live up to. You (the Great River Project missionaries) are the closest friends in the world to me. I don’t have anyone else.”

During his final year of nursing school, Soty regularly sent me screenshots of Bible passages he was reading. He also joined a Cambodian Adventist youth Facebook group and would send me links to special music pieces or testimonies posted there that touched his heart. He was very touched by heartfelt worship to God. His favorite song is Humble Yourself in the Sight of the Lord.

I hadn’t seen Soty in years and didn’t know his spiritual condition, but he seemed very open. However, when he returned, I was amazed at his voracious hunger for the complete truth of God, no matter where it takes him. Nothing prepared me for the amount of love he would pour into my life. It was amazing to be able to introduce Jesus to someone who knows the Qur’an backwards and forwards. I know the time and effort he spent to become the best Muslim he could will not be lost in God’s plan for his life. I am watching in amazement as God breaks down every barrier to bring Soty to Himself. I know it’s going to happen. We are waiting and praying expectantly for the day that Soty surrenders himself to his Savior. Will you commit to praying for Soty at a specific time each day?