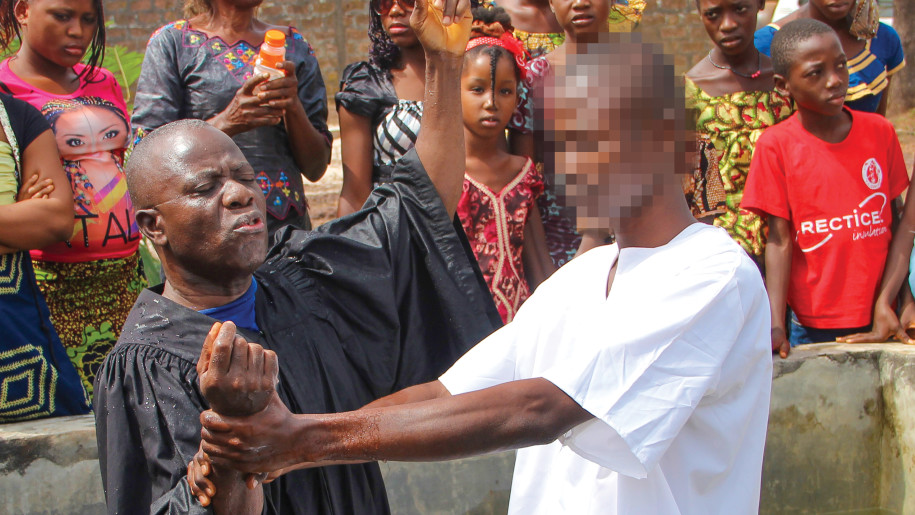 When we finally got a place for Mohamed and he moved out of our home, I noticed that he began to spend less time doing his Muslim prayers. He and I had more and more discussions about spiritual things and the power of God. I often brought up the commonalities between Christianity and Islam, and I avoided religious arguments that might turn him away from further sharing. We talked about how close we need to be to God. He gave his Islamic point of view, and I agreed with him and said, “That reminds me of something I wanted to talk to you about.” He looked at me expectantly. “A week ago,” I began, “you were very devoted to your prayers. But now I notice that you have stopped going to the mosque even for your Friday prayers. Why is that?” He told me we would have to talk later about it. Isatta and I kept praying for him.

One day I noticed that The Desire of Ages was missing from our bookshelf. Three days later, Mohamed came back with the book and asked me to talk more about the Bible with him. “Do you want Bible studies or just a religious debate?” I asked.

“I have been reading Steps to Christ and The Desire of Ages, but I am very confused,” he confessed. Trying not to appear over-eager, and wanting to test his sincerity, I told him I would try to find time to study with him. That same week he asked Isatta to invite him to church. My wife extended the invitation to him, and he was there Sabbath morning, carefully watching the way we worship and how we relate to each other. Each Sabbath in our church we have a potluck and stay at church until the end of Sabbath. During this time some groups go out on visitation, and others have Bible studies.

After the afternoon service, Mohamed came to me again, almost desperate. “I want to have Bible studies. I am confused. Please help me!” We set up a Bible study time.

Before starting our Bible studies, I dedicated three days to fasting and prayer for God to guide us and give me the words to say and the Bible and Quranic verses to use that would bring Mohamed to conviction.

Indeed, our God answers prayers! Our first Bible study dealt with who Jesus is. I started with what the Qur’an says about Him. I wanted to prove to Mohamed that Jesus is the last-day Prophet the Qur’an speaks about, and that the Qur’an does not have answers for salvation by faith. God guided me to start with Sura 4:171 (An-Nisaa) which describes Jesus as the “Word of God bestowed on Mary and as the Spirit that proceeded from HIM.” We also looked at Sura 19:21(Maryam) which indicates that Jesus is a “Sign unto men and Mercy from God.” The third verse we looked at was Sura 3:49 (Al-i-Imran). It also describes Jesus as a miracle worker and a life giver. After reading these verses, Mohamed wanted to understand more deeply, so we opened the Bible. The Lord directed us to Isaiah 61:1 and 9:6. I explained that these were a few of the many prophecies about Jesus hundreds of years before He was born, and they were fulfilled in Matthew 1:18-21 and Luke1:26-38. These verses clearly explain the incomplete and ambiguous verses about Jesus from the Qur’an. This was my way of confirming to Mohamed that the Bible is credible and can be trusted. He was quiet during this part of the Bible study. At the end I asked if he had any questions, and he replied that he would like time to think about what he had learned.

During the next two weeks, Mohamed started going to the mosque again, and he even fasted for a week. He was very confused and desperately looking for answers. Each time he went to the mosque, he noticed more confusion and contradictions in the Qur’an. But each time he read the Bible or the Spirit of Prophecy books, things become clearer.

Two weeks after our first study, Mohamed came to me with one question. “Answer this question, and you might make me a Christian,” he said. I told him the word of God would reveal the truth to him. “I have been doing some research, and I think I can trust the Bible,” he said. I praised and thanked God in my heart for this breakthrough. What is your big question?” I asked.

“The Spirit of God and the Word of God created the world,” he replied.

“Hallelujah!” I exclaimed. Then I asked him, “The Spirit of God and the Word of God is God?” “Yes,” he replied.

“Praise the Lord!” I exclaimed again. Then I asked him to read John 1:1-14. As he read I prayed fervently in my heart that he would be convinced of Jesus’ divinity. I was so into the prayer that I did not notice when he finished reading. He was sobbing. “So, who is Jesus?” I asked him.

I was also in tears as I said, “Thank you, Jesus!”

We went back to the Qur’an and read Sura 3:55 (Al-i-Imran): “Those who follow Jesus will be superior in the resurrection than those who reject Him.” Again I asked Mohamed to read John 14:6-12. Without any further explanation, I asked Mohamed if he would like to follow Jesus. He accepted. It was not by might nor by power but by the Holy Spirit that this young man gave his life to Christ. Praise God for answering our prayers!

Two days before his baptism, Mohamed asked me, “Uncle Fred, should I change my name to a Christian one?”

“No,” I replied, “your heart and life is all that Jesus wants, and you have given them to Him. All He requires now is that you live a new life with Him and in Him.”